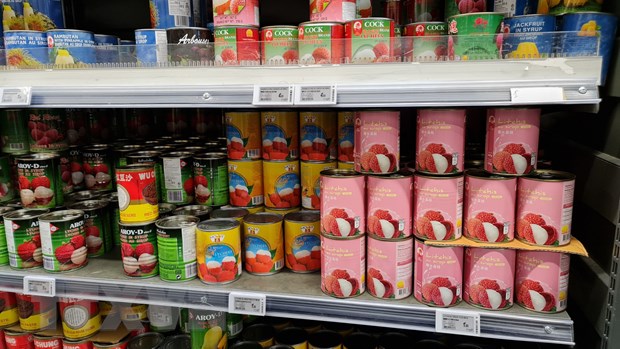 Tang Frères, an Asian supermarket chain in France, has recently imported more than 20 metric tons of canned lychees from Vietnam, according to the Vietnam News Agency.

The export batch marks the first time Vietnam’s canned fruits have been available for sale in the biggest Asian supermarket chain in France.

This event is a significant step which opens up a new strategic outlook for Vietnamese canned fruit exporters in both France and the European Union, said Dinh Toan Thang, Vietnamese Ambassador to France.

“Vietnam has many businesses pioneering in producing canned fruit; however, the exported volume to France and the EU remains modest, via just several small retail distribution channels,” Thang said.

“Vietnam thus still has much room for boosting this kind of product in these markets, which helps reduce pressure on farmers prior to harvest seasons in the long run, if our businesses take full advantage of the opportunities and prove a stable capacity in fruit supply."

Vu Anh Son, a representative of the Vietnam Trade Office in France, stated that they have collaborated with the Vietnam Trade Promotion Agency in selecting the best suppliers in the homeland to bring success to the first canned fruit batch exported to France.

Given the wide network and hard-earned effort of enterprises themselves, Vietnam has been able to search for the best French partners and reach their very first agreement with Tang Frères, even amid difficulties caused by the COVID-19 pandemic, according to Son.

The EU-Vietnam Free Trade Agreement (EVFTA) has been of great significance to opening up opportunities for Vietnam to promote export products in EU markets, thanks to the relaxation on tariffs and a fair playground for the countries involved.

Many foreign partners with establishments in France are also planning to increase the presence of Vietnamese goods in their systems, according to the official.

The promotion of canned fruit is part of a series of trade promotion activities of the Ministry of Industry and Trade to stimulate demand for Vietnamese farm produce in France and encourage Vietnamese enterprises to directly participate in foreign distribution networks.