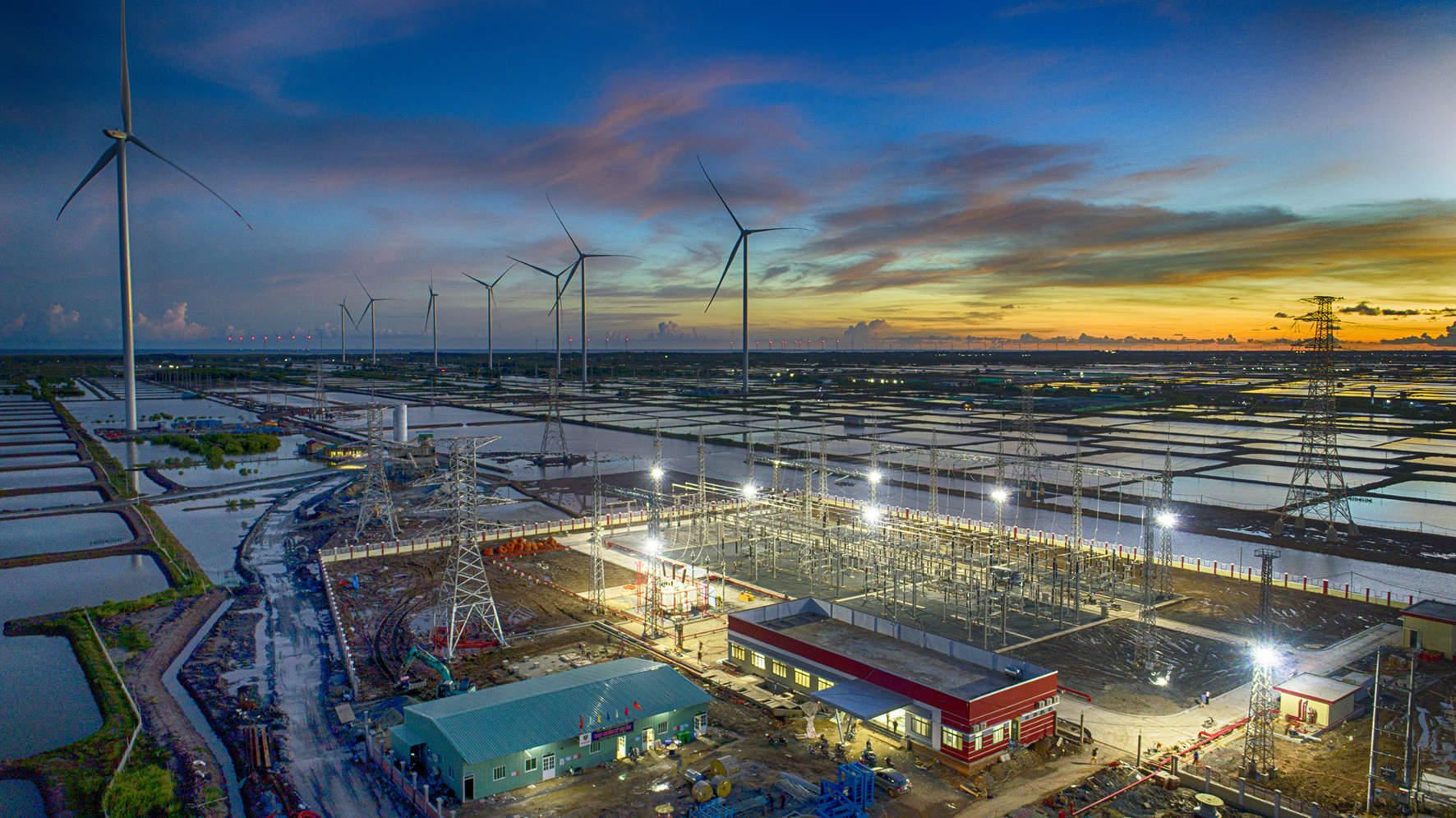 Bac Lieu Province in southern Vietnam is striving to become the national center of clean energy, with multiple wind power projects being implemented and put into operation.

Bac Lieu Province currently has the most wind power projects in commercial operation in the Mekong Delta.

Many vast land lots filled with ponds and lakes were turned into modern wind farms in just one year.

Race to the finish line

Within the final months of 2021, seven wind power plants were put into commercial operation across Bac Lieu.

The southern province currently has eight wind farms, including six offshore and two on the mainland, with a total capacity of 496.2MW, which are able to produce approximately 1.4 billion kilowatt-hours of electricity per year.

Located along the border of Vinh Thinh and Vinh Hau Communes in Hoa Binh District, the project was initiated on October 11, 2020 and entered the first phase of operation in late 2021.

With 26 wind turbines and the capacity of 80MW, the VND3.7 trillion (US$162.8 million) project is considered the largest onshore wind farm in the Mekong Delta.

A lot of challenges were faced during the construction of the plant due to the muddy terrain, Tran Phu Chien, chairman of board of directors of Hacom Holdings, stated, adding that the problem was eventually solved thanks to the prompt support of provincial authorities and relevant sectors.

The project is expected to produce some 280 million kilowatt-hours of electricity and contribute about VND60 billion ($2.6 million) to the provincial budget each year, according to the Bac Lieu People’s Committee.

In late October, another wind power project was also put into operation in Hoa Binh District with the capacity of 40.5MW.

The construction of the project’s first phase began in October 2020 and was finished in just a year despite the serious COVID-19 pandemic.

Clean energy has become an important sector in Bac Lieu Province as it boosts economic development, contributes to the restructuring of production and labor, and creates an impetus for modernization and industrialization, according to Phan Van Sau, director of the provincial Department of Industry and Trade.

Renewable energy, namely wind and solar power, receives the top priority and is considered one of the five main pillars for socio-economic development in the locality, Sau continued.

Bac Lieu has a lot of potential for clean energy development with a 56-kilometer coastline, vast coastal mudflats, windy weather, and an annual sunshine duration of 2,200 to 2,700 hours.

The province is also not likely to be affected by such natural disasters as storms, floods, or earthquakes, the official added.

Aside from the eight wind farms that are operational, two more projects with the combined capacity of 192MW are under construction in Bac Lieu.

Chairman of the provincial People’s Committee Pham Van Thieu stressed that the administration has directed relevant authorities to provide favorable conditions for the construction of wind power projects by simplifying investment procedures and expediting the site clearance process.

The province also provided COVID-19 vaccination to construction workers and those in charge of carrying out the project, as well as allowed experts to enter and exit the locality during the social distancing period.

Preparation is also being made for the implementation of a $4 billion LNG (liquefied natural gas) power project with the capacity of 3,200MW in the province.

The construction is expected to begin this year so that the plant can enter its first phase of operation in 2024.

The medical worker was caught red-handed