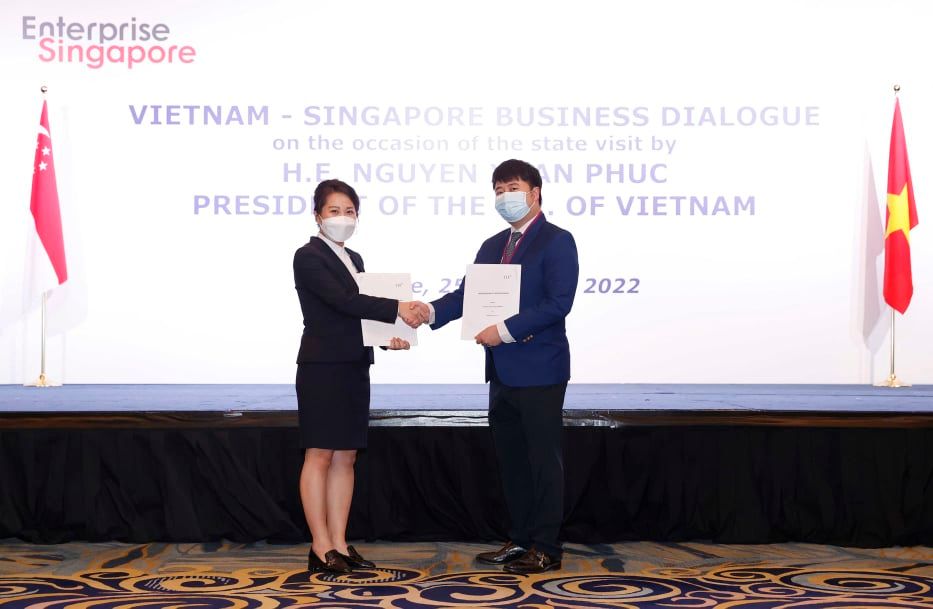 Vietnam's TH Group, which owns the TH True Milk brand, and Singapore’s HAO Mart Pte Ltd signed a memorandum of understanding (MoU) on strategic cooperation in the consumption and promotion of fresh milk products, agricultural products, and organic foods of the former in Singapore market on Friday.

The MoU was signed at the Vietnam - Singapore Business Dialogue under the witness of Vietnamese State President Nguyen Xuan Phuc within the framework of his state visit to Singapore from Thursday to Saturday.

As TH Group considers Singapore to be a large and potential market in ASEAN, the firm has carried out many trade promotion activities in the island country over the years.

In 2021, TH Group officially launched more than 30 product lines in Singapore at a series of supermarket chains -- such as HAO Mart and NTUC Fairprice -- and e-commerce platforms -- including Shopee, Lazada, Redmart, Amazon, Grabfood, and NTUC marketplace.

The Vietnamese dairy producer is planning to continue expanding its product coverage in Singapore under the cooperation with Singapore-based L’earth Group that was established last year, according to TH Group’s international sales manager Hoang Thi Thanh Thuy.

It also aims to widen its influence to other Asian markets such as Malaysia, Indonesia, the Philippines, and Hong Kong.

Established in 2009, TH Group is the largest fresh milk company in Vietnam, according to the American Chamber of Commerce in Vietnam, and also runs a number of food and beverage projects, including manufacturing and processing fresh milk, nut milk, clean fruits and vegetables, herbal and purified water.

HAO Mart is a subsidiary of HAO Corp, which operates in electronic manufacturing and retailing services.

Established in 2016, HAO Mart has expanded its retail chain to nearly 50 stores across Singapore, distributing more than 70,000 fast-moving consumer goods (FMCG) products imported from 43 countries, with its average annual revenue topping US$90 million.