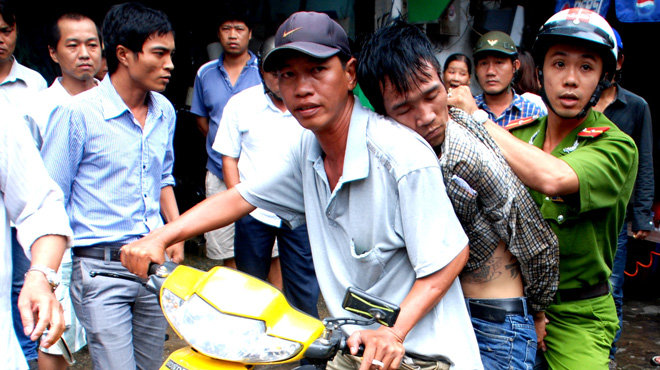 Expat recounts being robbed at lightning speed on Saigon Bridge

Editor’s note: Many expats will not know that the last month of the lunar year in Vietnam is usually the ‘prime time’ for robbers, thieves and other criminals, so it is highly recommended that everyone keep their defense up.

Peter Verheij, an expat married to a Vietnamese, was unlucky enough to fall prey to two necklace snatchers in Ho Chi Minh City last week, as he recounted in the following story sent to Tuoi Tre News.

I am living in Ho Chi Minh City and am married to a Vietnamese lady.

For years we had led a happy life in Vietnam, until the big disappointment came today, January 15.

I was with my son on our motorbike; two big adults were crossing the Saigon Bridge.

We then stopped for a while to take pictures of the beautiful skyline.

When we started the bike again, it happened, with my eyes wide open, under clear blue sky.

Two well-dressed men passed us on a motorbike, only to stop and turn around and pass us again on the bridge. They looked very closely at me and I felt a bit surprised to be surveyed; surely they had seen foreigners before?

But they whizzed past us - against the sparse traffic on the bridge.

My son and I pulled away and within seconds the same men passed me again from behind. This time the back passenger slipped his finger around my necklace, tore it of my neck and the two men hastily sped away.

My golden necklace was stolen in milliseconds, by highly skilled thieves who must have done this many times.

Given the accuracy of the robbery (I did not have a scratch!), the timing of the couple (exactly at the right moment of passing my bike), these were clearly very crafted Vietnamese thieves.

I am wondering why they can get away with this and the police have not caught them yet. These men were no starters; these were professional snatchers that acted for profit, not because of poverty. They must have done this many times over, and over, and over again, without getting caught.

Our disappointment is huge. My wife bought the necklace from her savings, and it was expensive (more than US$500).

More disappointing was our conclusion as well that there was no point in going to the police.

Where do you find English speaking police in this country? Or some equivalent of the Thai and Malaysian tourist police to whom you can lodge a complaint?

At least I would be part of the statistics on the number of robberies from foreigners in Vietnam.

For many years I have been reading your newspaper and could not stop wondering if it is really true what tourists and expats write about Vietnamese people doing bad things.

We always check taxi meters and pay a tip to the driver if he or she is polite. We do not get involved in scams as my wife only trusts her family.

Yes, we do know about the lack of service in the tourist sector, as we have traveled far and wide in this country.

The indifference and a lack of customer focus - yep we have experienced them as well. Just go to any supermarket or department store, you will meet with apathy and lackluster staff who do not seem to realize that paid employment is a privilege, and that customers pay for their salaries.

But after the incident today, I think that plain robbery should be added to the same row as bad taxi drivers alongside their scams and underperforming tourist services.

My thoughts are filled with an African proverb: "Every day is for the thief, but one day will be for the owner" and I hope the owner will strike without mercy on these bad apples.