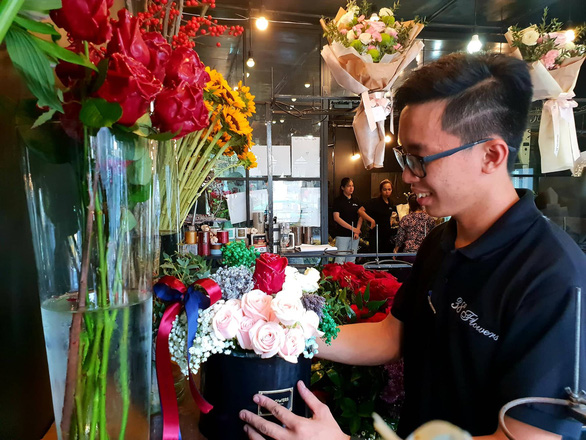 Is Valentine’s Day a good excuse to offload all the flowers and candy left over from Tet?

Funny how a Western custom that’s not really that old has become so popular worldwide in cultures that usually don’t put romantic love at the center of marriage and relationships. It does get just that bit weirder when adapted by cultures that go overboard on the rites and rituals but leave behind a lot of the deeper meanings behind Valentine’s Day gestures.

Like most good celebrations that were too good to suppress, Valentine’s Day started out as a pagan Roman festival in February, then the Christians who were a seriously miserable bunch and hated fun named February 14th as Valentine’s Day for a saint. By the Middle Ages, the French brought romance to English (the English are even more miserable today…) and Valentine’s Day was marked with poems and the odd occasional smooch.

It got popular by the 17th century and the next century featured gifts as well as greetings. Soon mass-printing led to Valentine’s Day cards and clever capitalists soon persuaded us to add chocolates, flowers and candle light dinners to the custom. By the 20th century, America’s contribution to the world – mass media – pushed us into the weirder world of flying babies with wings and bows. So now we believe getting shot by an airborne toddler with a golden arrow is a sign of deep affection rather than evidence of drug addiction.

For expats and foreigners in Vietnam, it’s easy to organize a romantic day ensuring that you’ve shown your partner, mum and fearsome mothers-in-law that you care while laying the groundwork for a peaceful year ahead. A day at the beach, a resort weekend, even a simple breakfast in bed are satisfyingly received and appreciated.

If you forget Valentine’s Day in the West, then you’re often in the doghouse, made to cook your own dinner for a week and unforgiven until the matter has been suitably rectified by deep apologies and Chocopologie Chocolate Truffle by Fritz Knipschildt at an eye-watering $2,600 per set.

Yet Asian countries tend to hedge their bets a little bit. You get second chances!

In Japan, its women who give out the goodies – both single and attached – give out giri choco (chocolates) to male partners, friends, or colleagues. They are obligatory gifts, and do not carry any romantic meanings. However, if women want to show their love, then a handmade or costlier gift with a box of chocolates is given – also known as honmei choco. So later on March 14th, men return the favor by giving women a gift that's white – white chocolates, marshmallows, cookies and such. Thus the day is known as White Day. In Korea, there’s Black Day on April 14th. On this day, people celebrate their singlehood by dressing in black, eating bowls of black bean noodles or drinking black coffee. It’s a gloomy day!

As the Guardian Online reported recently, Japanese women are not happy about the ‘obligation’ anymore and just want to make the occasion for loved ones and close friends – not for improving workplace relationships. Sorry boss!

For the Vietnamese, things tend to be a bit more downscale as Vietnam’s Women’s Day, later in the year, is the more traditional acknowledgment towards to women. So mostly it’s younger Vietnamese more familiar with Western habits who celebrate. Very often this is a college or university event although I do know of couples who like the custom as well.

I find it interesting that the custom goes in both directions, male to female and vice versa, and age is becoming less a factor in participation. Although most Vietnamese buy gifts on a modest scale, it can still be an expensive proposition with a standard bunch of flowers selling for anything between 40,000 and 80,000 dong and a grand flower posse fetching 200,000 dong or more. Perfumes, specialty boxed chocs and jewelry are also more favored these days as the middle class Vietnamese become more affluent.

It does go to extremes though. It’s not so unusual to see videos posted on YouTube of young men declaring their love to a girl surrounded by hundreds of flowers in a public setting. It could go either way – shock and embracement for the girl or utter delight for the boy with an acceptance.

It’s a good sign of the times, however, in a country where arranged marriages are frequent that individual expressions of love grow in popularity.

So, have fun this February 14th and if you blow it by forgetting, I’m not saving you!