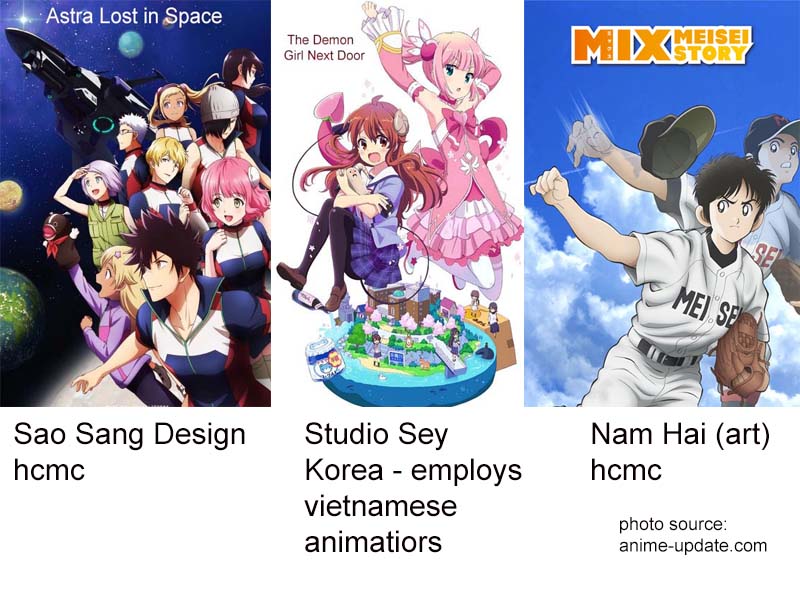 Although I’ve been a big fan of anime for years, I didn’t realize how big the anime (animation) production industry is in Vietnam.

Anime is more or less the Japanese word for an animated cartoon or movie. Yet the way the Japanese themselves use the word is the same as Westerners calling a movie like ‘Frozen’ or ‘Toy Story’ an animated story. And it’s big business nowadays.

The name refers almost exclusively to cartoons and movies although many of the themes, artwork and production houses cross over with other forms of media and merchandise such as manga comics (manga basically means a style of drawing and presentation that originated in Japan), promotional gimmicks and fan participation events such as cosplay (dressing up as your favorite or most popular anime character) and model figurines – Godzilla or Astroboy (if you’re old enough to remember!) would be one example.

During the French occupation of Indochina, Vietnamese craftsmanship and art were held in good regard and the French encouraged the creation of fine art schools. Although there aren’t many of these around nowadays, some of the better-known institutions are the School of Fine Arts in Ho Chi Minh City and the Vietnam University of Fine Arts. Other places such as FPT Hanoi teach computer graphics and software applications.

Up until around 1991, Vietnam only had one state-owned animation company – called, unsurprisingly, the Vietnam Animation Film Company (VAF). But the birth of the Internet in Vietnam, the demand for computer experts and the increasing ability of animators to use English created a new wave of companies producing content with high quality. In recent years, VAF has produced much more content to match private companies in supplying television, paid TV providers and its own YouTube channel.

Anime’s popularity has spread over forty years across Asia and occasionally into Western audience markets. Netflix now commissions anime production for Western markets as well as translation and dubbing (voice-over English translations) of original Asian anime shows; for example, ‘Carol and Tuesday’ – a show about two ambitious female musicians seeking fame and fortune on the planet Mars sometime in the future. And ‘Crunchy Roll’ streams anime shows with either subtitles or dubbing for audiences worldwide.

So what does this have to do with Vietnam?

Well, as it turns out, Vietnam has more than twenty animation studios churning out artwork, 2D and 3D special effects for commercials and Vietnamese cartoons as well as for Japanese and Korean animation studios, and more frequently, for international clients in the West and across Asia.

Part of the reason is the booming interest in anime, the high demand for fresh content and the pace of production involved in generating series after series. To understand this needs a bit of background information.

Anime in Japan is conservatively worth more than 20 billion U.S. dollars and worldwide more than 150 billion dollars. It’s non-stop content creation and many studios have multiple production schedules and projects running concurrently. The studios, in whatever country, regularly produce shows ranging from a few episodes to full-blown 24 episodes that run over a season, usually about three to four months. Shows can also range from ‘fillers’ – three-to-nine-minute episodes and anything up to an hour, although the standard is usually just under a half hour with commercial breaks. So that requires a heck of a lot of artists and computer specialists!

It’s expensive, too. It can take months to produce a few hours of animated screen time and production crew numbers can be large. Some larger shows with 24 episodes or more can cost up to two million dollars per show to make. Why? Because you need directors, musicians, background artists (more on them later), rendering artists who take an image and convert that to 2D/3D or computer generated effects (CGI), voice actors, writers, production assistants, sound effects and freelance artists filling the gaps in production.

And this is where the Vietnamese come in. Vietnamese artists and studios have a good reputation for creating high-end art, backgrounds and effects for shows and that’s encouraged the birth of animation companies in Vietnam for local and international content.

No animation studio in Vietnam can survive purely on anime movie or TV series production, either within the country or working with overseas companies. Yet there is a booming market for locally made cartoons for TV, animated shorts for advertising and particularly educational games and programs for children. So the work becomes a wide variety of projects often at the same time within the locals.

By comparison, Japanese and occasionally Korean production houses can generate enough hours of anime to make decent profits while Vietnamese companies constantly teeter on the edge of going broke unless they work extremely hard at their marketing and networking.

Originally a joint French-Vietnamese project started as a small company around 1995, Sparx is now a highly successful and innovative production house in Vietnam with offices and overseas worksites. It’s also the only Vietnamese company to make a full-length animation movie called Igor.

Colory Animation Studio, another local company, created a 3D film in 2011 but it and many other companies now work more with foreign firms than producing local content.

In part two and three of this series, I’ll be explaining more about production, money, issues and the future of Vietnamese animation.

How lucky is your Tet money?

Is your TET red envelope packed full of Vietnamese dong or just a few miserly notes?