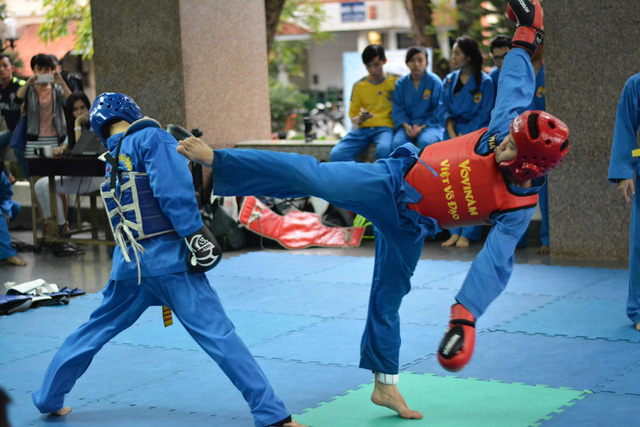 A large proportion of young people in Vietnam are living a sedentary lifestyle as they spend more time surfing the internet, playing online games, working on computers, or simply just sitting down doing nothing.

He does not do sports even in his spare hours.

"I once signed up at a gym, but after working out several times, I lost my motivation. The thing is I also had to get up too early in the morning for class, so I quit."

In fact, most Vietnamese college students have a tight weekly schedule at school, so the need for a good rest prevails: they would love to put up their feet at home, in the dorm, or at a bubble tea house.

Few take time to do exercise as they attribute little importance to this habit.

In her idle time, Nguyen Thi Huynh Nhu, a student from the University of Science in Ho Chi Minh City, tends to review her lessons, surf her Facebook newsfeed, or enjoy herself over movies or books.

She has, however, recently realized the adversity such a lifestyle is inflicting upon her: she finds it hard to think straight and stay focused on work, and her health is suffering.

She is considering taking up badminton as a way to boost her general constitution.

There are many reasons for such a passive way of life.

A large number of college students living far away from home are under pressure from school and work: they have to fare well academically while striving hard to earn a living.

Therefore, they have no time left for sports activities.

Others recoil at the thought of jogging, swimming or volleyball, saying they would rather save energy and thus go for passive forms of entertainment.

A third-year student at the University of Social Sciences and Humanity in Ho Chi Minh City, Huynh Thanh Doan still seeks time for jogging despite his busy school work.

He spends merely 30 minutes a day for the activity, but this is enough for him to clearly sense a boost in stamina.

"I used to feel a wreck after school, but now my health has improved a lot,” he said. "I also feel mentally refreshed and better ready for productive learning sessions.”

To university students living far from home, their daily food intakes are already lacking in nutrition. Therefore, doing exercise and having balanced diets are essential if they are to study effectively.

Kungfu master Vo Nhat Son, who has a B.A. in educational management and a specialist in Vovinam, a traditional form of Vietnamese martial arts, notices the distraction caused by technology in young people's lives. He says they prefer computer games to sports.

"Internet and game bars are packed like sardines all day and night,” he said. "Young people basically do not have an adequate awareness of good health."

The Vovinam master also notices how lots of young people fail in their attempts to work out physically, saying poor health prevents efficiency at work.

"I hope the students will spend time for sports, martial arts, and physical activities in general,” he further commented. "I look forward to a day when the younger generations can tell for themselves what is vital for their future."

Sports activities available at the present time are not appealing enough, but students are totally capable of taking it out on their own by balancing their schedules and work.

Mai Toan Thinh, a lecturer at the Ho Chi Minh City University of Sports, advises that students opt for suitable sports, considering their own hobbies, abilities, budget, and time.

"There are easy sports to do, such as jogging, cycling, swimming, and soccer. There is simple, home-based exercise for shoulders, chests, backs, bellies, and legs as well. Making a habit out of sports will get you in shape," he added.

"A healthy mind in a healthy body is definitely the best policy," the lecturer concluded.