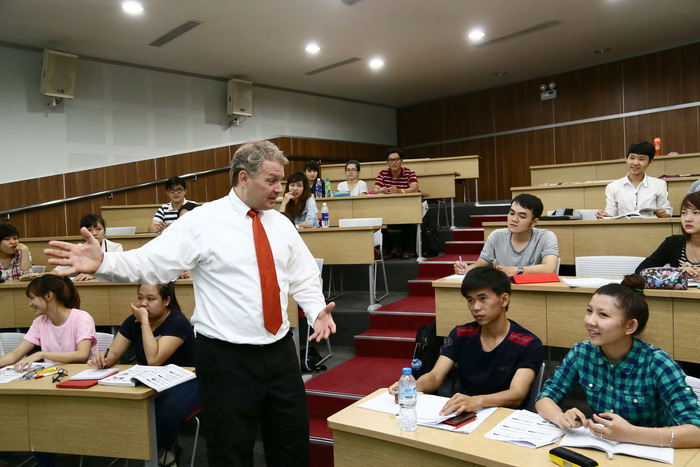 A national foreign language project, with a focus on English, meant to enable Vietnamese college students to reach a globally recognized level in terms of their English command has foundered after 10 years of implementation, on both teachers’ failure to meet requirements and learners’ inability to live up to benchmarks.

On December 29, Vietnam’s Ministry of Education and Training (MOET) organized a summative meeting on the extra English programs for three-year teacher training colleges and higher education institutions in 2008-2016.

Here, Tran Anh Tuan, deputy director of the Department of Higher Education under MOET, noted the shortcomings of Vietnam’s National Foreign Language Project 2020, which was kick-started in 2008 and will end in 2020.

Under the guidelines of the massive project, college students who do no major in foreign languages are required to meet level B1, or intermediate, upon graduation, with English understood as the primary among the foreign languages, Tuan said, referring to the six-level Common European Framework of Reference (CEFR).

This major objective has not been met: lower than 20 percent of college graduates could reach their expected level of English language proficiency.

B1 is the third level on a six-step A-C scale in accordance with the CEFR, written by the Council of Europe. The CEFR is a popular reference tool to determine a person’s level of English competency.

The three major obstacles, as reported by school representatives at the December meeting, include a low level of English competency upon college admission, limited training hours, and below-standard English proficiency of teachers of English.

School representatives claimed that the inadequate command of English when students enter college has led to considerable challenges in boosting them to level B1.

Surveys conducted in 2014 by Hue University and the Ho Chi Minh City University of Transport revealed that respectively 90 and 93.4 percent of fresh intakes were at level A0 and A1, and only 10 and 6.6 percent were at A2.

In simple terms, they knew next to nothing about English on the day they entered college.

With such input, the in-college teaching of English meets with extra difficulties.

Dr. Nguyen Thi Lan Anh, dean of the department of foreign languages under the Ho Chi Minh City University of Transport, said that students need 360-400 hours of training to go from A2 to B1.

“The actual classwork at our school is currently set at 100 hours,” Dr. Anh added.

“A 2015 survey showed that fewer than 20 percent of our 4th-year and 5th-year students could reach the output standard.”

The story from the University of Economics and Business Administration, as part of Thai Nguyen University (TNU), may raise a few eyebrows.

According to Professor Dang Van Minh, vice-rector of TNU, after a few years in effect the B1 threshold has actually hindered 2,000 students from graduating on schedule, which sparked hard feelings.

“We set such a high standard but could not figure out the proper way there. TNU had to lower it to A2 instead,” Prof. Minh admitted.

The language competence of teachers of English is also to blame.

MOET ran a check of college lecturers’ language proficiency in 2013 and found that among the 500 lecturers of majors other than English, no one reached level C2, the highest CEFR level, 71 attained C1, and most were on B2.

Nineteen lecturers could only meet the A2 standard, and three got A1, all lower than the standard set for students.

College teachers in Vietnam are required to reach C1 if they teach English or use the language as the medium of instruction in majors other than English.

It is compulsory for lecturers who do not use English in their teaching to achieve B1 if they hold a master’s degree, and B2 if they have a doctorate.

Solutions: change from below, aid to practitioners

A representative from a university believed a prerequisite to the national project’s success is a boost in the quality of English teaching in high school.

He called for MOET to think up proper solutions.

Despite early exposure to English, now as early as first grade (at six years old), many Vietnamese students rank below average in proficiency when entering higher education.

This, coupled with capped training hours, makes it even more arduous for them to reach level B1 after a few years in college.

Representatives from numerous universities advocated the enhancement of the language competence of English teachers.

Dr. Tran Khac Hoan, from the Vinh University of Technology Education, appealed to the national project management for more professional teacher training, especially when it comes to overseas training programs.

Dr. Hoan believed this should extend also to schools outside the realm of MOET.