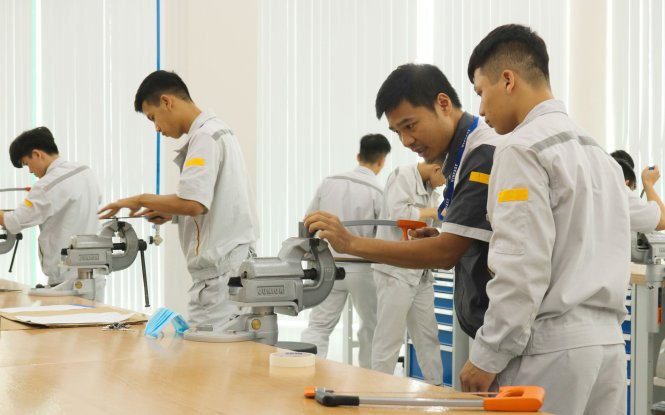 Access to modern equipment and full autonomy over one’s scientific endeavors are what a privately-funded new genetics research institute in Ho Chi Minh City is promising overseas talents in exchange for their contribution.

The Medical Genetics Institute (MGI), based in District 10, Ho Chi Minh City, was founded by Prof. Dr. Truong Dinh Kiet, former vice-rector of the local University of Medicine and Pharmacy, and his colleagues in 2016 as a place for aspiring Vietnamese scientists to do advanced research into the human genome right from their home country.

The institute is equipped with the latest equipment in the field, some costing US$850,000 apiece, allowing complicated genetic tests previously not possible in Vietnam to be done at an affordable price.

Nguyen Van Thong, a doctor at Hung Vuong Hospital in Ho Chi Minh City, said in the past Vietnamese parents wishing to have their unborn baby’s genes tested for prenatal screening had no choice but to send samples abroad at great costs.

With the institute’s opening, the tests can now be done in Vietnam at a much more affordable price, Thong said.

According to Prof. Kiet, replacing traditional genetic sequencing methods with modern technology has boosted efficiency by 17 times while cutting costs by roughly a third.

“In addition, we are also capable of real-time sequencing, which is useful in emergency cases such as testing for antibiotic-resistant bacteria,” Kiet said.

Among the overseas Vietnamese scientists who responded to the institute’s call for talent is Dr. Giang Hoa, one of Professor Kiet’s old students who gave up his 12-year research career in the U.S. upon receiving the offer.

“I was not completely certain of my decision, but I saw the opportunity of being in charge of my own research, which to me was the most important thing,” Hoa said.

A full-time researcher at the institute enjoys lucrative benefits including a monthly salary of up to VND150 million ($6,400), 24/7 access to the laboratory, and full autonomy over their research.

However, Dr. Hoa said what he found most attractive about the working environment at the institute is the opportunity to work with scientists sharing his vision, and freedom from the burden of bureaucratic paperwork, which is taken care of by his supervisors.

“In the long run, the institute can get involved in technology transfer, human resource development, and lay the foundation for mapping the genome of the Vietnamese people,” Kiet said.