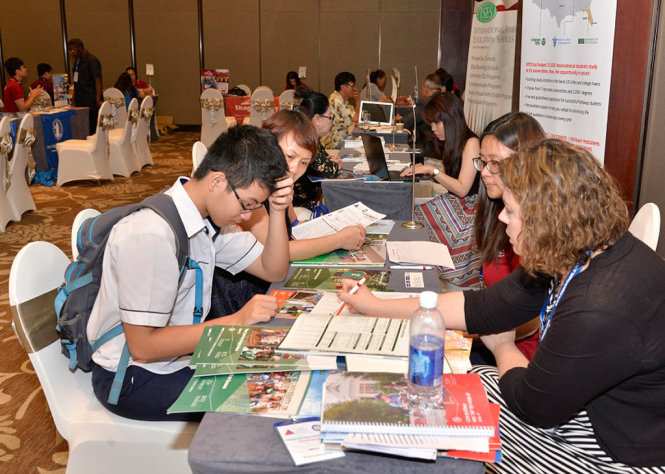 Number of Vietnamese students in US reaches 24,325, surges for 17 straight years: report

The number of Vietnamese students in the United States has risen for the 17th consecutive year to over 24,000, with most enrolling in undergraduate programs, the U.S. Embassy said Wednesday in a media release, citing a report.

The Institute of International Education’s (IIE) annual “Open Doors” Report for the 2017-2018 academic year shows that Vietnam remains the sixth leading country of origin for all international students in the U.S., with 24,325 students, up 1,887 students from the 2016-17 academic year, an 8.4 percent increase, the embassy said.

Of the 24,325 Vietnamese students in the U.S., 69.6 percent were undergraduates, 15.2 percent were graduate-level students, 8.6 percent enrolled in optional practical training, and the remaining 6.6 percent were pursuing non-degree programs.

The data also revealed that Vietnam is becoming a more popular destination for American students.

International students now make up 5.5 percent of all higher education students in the U.S., up slightly from 5.3 percent last year.

Engineering, business and management, and math and computer science remain the top selected fields of study by international students in the 2017-18 academic year.

Math and computer science were the fastest-growing fields of study with an expansion of 11.3 percent from the 2016-17 academic year, followed by legal studies and law enforcement with a climb of 10.4 percent from 2016-17.

The U.S. Embassy in Hanoi is celebrating IEW 2018 with an open house and various information sessions in Hanoi, Quang Binh, and Quang Tri Provinces to promote study in the North American country, providing information on student visas and U.S. government scholarship opportunities, and reaching approximately 400 students and teachers in person, as well as around 1,200 online.

The U.S Consulate General in Ho Chi Minh City is marking IEW 2018 with a series of activities in Hue City and at the American Center in the southern city.

The “American Roadtrip” at Hue University and Quoc Hoc High School is helping to advise students on U.S. exchange programs, study in the United States, student visas, and soft-skill development.

At the American Center in Ho Chi Minh City, an information session on November 15 at 2:00 pm will equip students with the knowledge and skills needed to succeed on standardized tests required for university entrance.

A panel discussion with senior international banking executives on November 16 at 2:00 pm will help parents navigate the financial aspects of supporting their children’s overseas education.