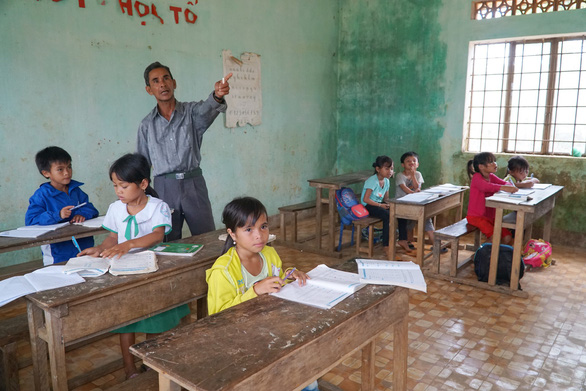 Pham Van Trieu has spent the past three decades traveling throughout rural Vietnam to share the gift of education with impoverished children in remote villages.

Over 30 years ago, Pham Van Trieu set out on a journey into Vietnam’s Central Highlands with one goal in mind: spread the gift of education to children who might otherwise have never seen the inside of a classroom.

Venturing into the mountains and through dense forests into remote regions where education was practically inaccessible, the 55-year-old teacher form the central province of Quang Ngai began offering primary education to needy children.

Of course, teaching in far flung mountain villages came with challenges that extended beyond classroom walls.

Just making it from his small house to the village center required a difficult trek along complicated walking paths and, as the bulk of his food supply came from vegetables he’d pick in the forest, severe rains could mean days without food.

“As long as my efforts help people, I won’t stop trying,” he said.

Trieu eventually settled down in a small village in the central Vietnam’s meadow of Bui Hui and began teaching the alphabet to local children in a small, makeshift classroom built by the villagers.

Trieu now lives a simple life in a narrow room adjacent to the classroom, relying mostly on instant noodles for substance, an old tea pot for hot water, and a rusty motorbike that’s been with him through all his ups and downs.

“Thanks to this little fellow, I feel less lonely,” Trieu said, gesturing to the worn out motorcycle.

The 55-year-old teacher said that he occasionally considers returning home to experience better living conditions but quickly reminds himself that, without an education, the children who depend on him face a bleak and uncertain future.

“I will continue try my best to teach these children no matter how difficult it becomes,” Trieu shared.

Staying in the villages as garnered him significant praise for his willingness to sacrifice his personal happiness to help children get the proper education the need to make it in the modern world.

“Our country needs more people like Trieu because there is still a serious need for help across Vietnam, especially in poor regions,” said Nguyen Minh Hai, the head teacher of a high school in Quang Ngai.