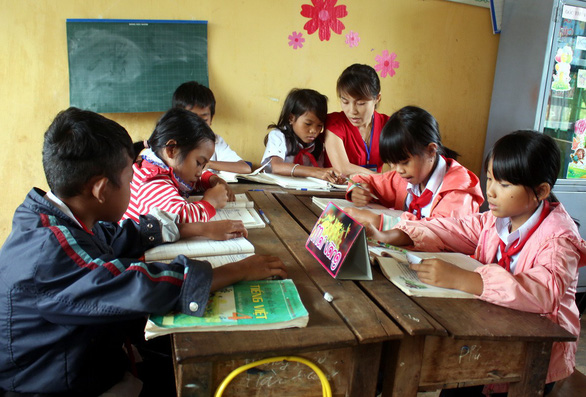 A new curriculum set to be applied from the 2020-21 school year in Vietnam will teach second graders probability and statistics, but there is already backlash among the public against the idea while educators claim the disciplines have been misunderstood.

According to the new curriculum, students attending public schools that teach Vietnam’s general education program will start to learn both probability and statistics from second grade.

Currently, statistics is taught limitedly in grade fourth, fifth, seventh, tenth, while probability lessons are not given until 11th grade.

Many Vietnamese, especially those who are parents of school-age children, have had their wires crossed over the new curriculum, as they think the concepts of probability and statistics are too difficult for second graders to grasp.

However, Prof. Do Duc Thai, chief editor of the new math program, begged to differ as he discussed with Tuoi Tre (Youth) newspaper why he thinks the new curriculum has been misunderstood.

According to Prof. Thai, probability for second graders will be taught via interactive lessons to help the young students familiarize themselves with, understand, and differentiate between the concepts of “certainty” and “probability."

As an example, he said, a teacher might show students that they cannot be certain which side of the dice they will get when they roll a six-sided dice.

“They will get to learn that the result [of the roll] can be one of the six sides,” the professor explained.

“People tend to be afraid of such subjects as probability, but it can be as simple as that.”

Thai added that statistics lessons for second graders are also designed with simplicity in mind as the students will be taught to count how many of their friends have a pencil, an eraser, or a notebook compared to the total number of classmates and note down the statistics.

Dr. Nguyen Duc Hoang, principal of a high school in Hanoi, echoed Prof. Thai’s opinion in saying that he has studied the new curriculum and scanned through some of its math textbooks and found that the probability and statistics lessons are not as terrible as the concerned public describes them to be.

“When parents go over the textbooks and read how the learning activities are designed, they will stop worrying,” Hoang told Tuoi Tre.

For long, the formal education system in Vietnam has been criticized for requiring students to study too much, with children in urban cities often starting a school day very early in the morning and ending it as late as 7:00 pm.

Parents have complained that their children are taught so many academic matters with little practicality.