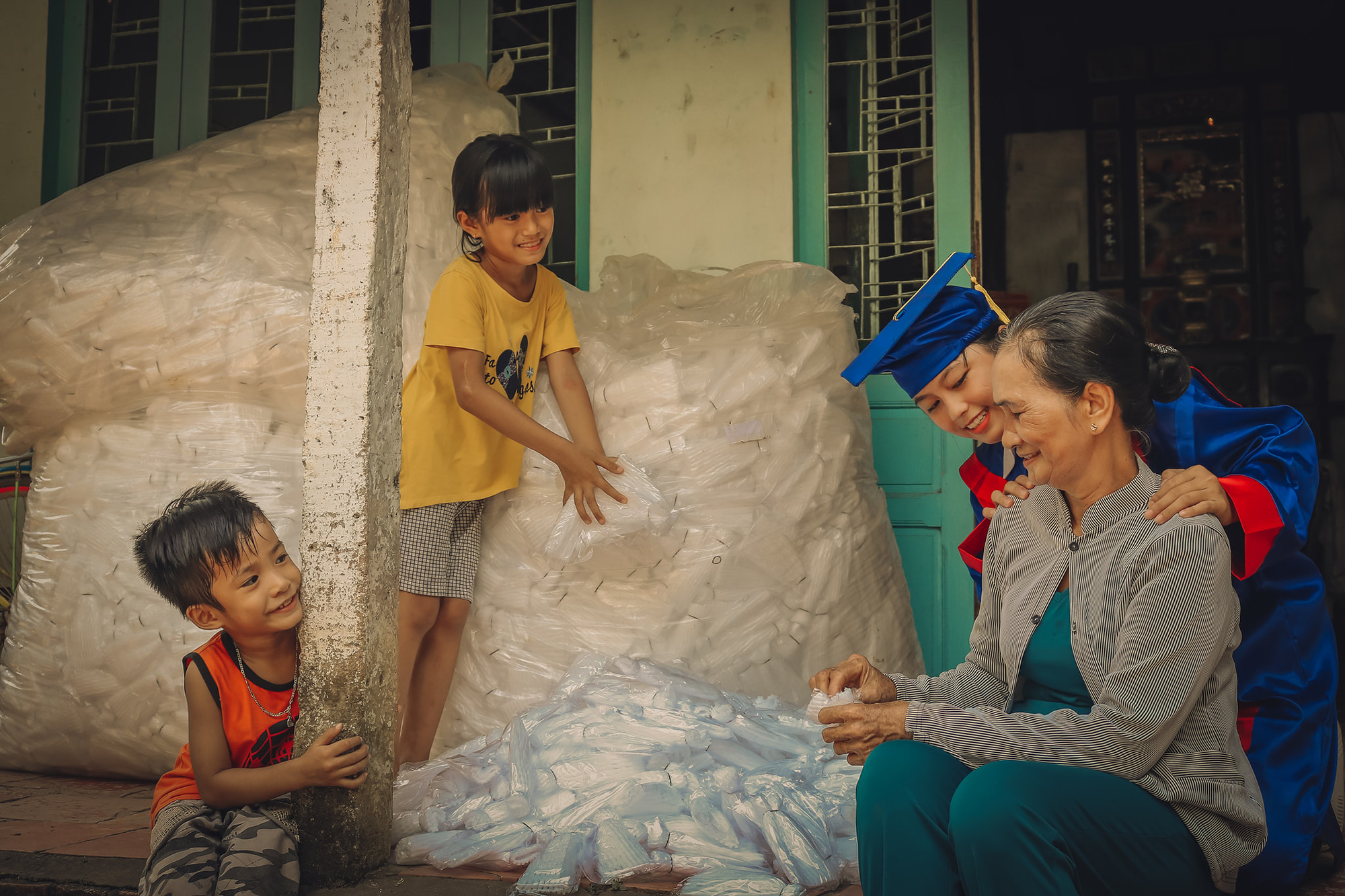 Captured by their teacher as a gift, a collection of student graduation photos went viral on Facebook in Vietnam in mid-August thanks to its heartwarming depiction of the familial love between the high school graduates and their parents.

It portrays high school students in graduation gowns, holding a red diploma while their families are by their side, their faces glowing with satisfaction.

Taken after the national high school exam in early August, these portraits are Thong’s gift to celebrate his students’ accomplishments.

According to Thong, the majority of his students come from families that are floating around the poverty line; they can barely afford education for their children, let alone a graduation photoshoot.

As a way to commemorate the occasion, Thong brought up the idea of a photographic project with his students and their parents.

Most of the parents were excited about the idea of photographs marking such a momentous occasion in their children’s lives, Thong recollected.

Some of them did refuse to appear in the images for fear that their unsightly looks might be an embarrassment for their children.

“However, most kids have talked their parents into appearing in front of the camera, to which they ultimately surrendered,” Thong recalled.

Moving between photoshoot sites proved to be a substantial challenge to Thong’s project since the locale is a remote one, where houses are scarcely dispersed.

For this reason, Thong and his student Nguyen Quang Huy had to spend a few days completing their intended work.

The teacher talked of those unforgettable snapshots from the life that his students and their families lead.

Thong reminisced about the trip to the house of a female student and her 67-year-old grandmother.

The student’s mother passed away when she was very young, meaning she had never met her mother, and her father moved out of town for work, leaving her alone with her grandmother in a remote house.

It takes a lot of work to get to her home over a long and bumpy road.

“To this day, I still cannot fathom how she made it to school every day traveling on that road,” he exclaimed.

The photoshoot had to be paused halfway through because her grandmother burst into tears.

Her grandchild passed the exam, but she has no means to support further education for her, which means her grandchild would have to compromise her dreams.

There is another student whose father sells lottery tickets for a living. The fact that his family is classified as a poor household did not stop the student from excelling in his studies.

He chose to apply to military school to have his tuition fee and subsistence expenses covered, and his hard work paid off in the entrance exam results.

“Rocky as their journey to education may be, their perseverance shone through, helping them conquer all obstacles,” Thong said.

The exam results of Thong’s students were welcomed with joyfulness by the teacher, yet at the same time, he was aware that the struggles of the kids have not ended.

“Some will not be able to pursue further education due to their financial circumstances. It perturbs me that some of my students will face formidable obstacles in their next pursuits.”

Since his students have not yet received their diploma, Thong brought his own — one that he earned after graduating from high school 15 years ago – for them to use as a prop.

“I did fight to earn this diploma. The same goes for them, their work was accompanied by the dedication of their parents. They deserve to see the achievements of their children on their graduation day.”

Quang Huy, the associate that contributed work to Thong’s project, said of his experience, “I’m very proud and happy to see photos of [my friends] standing next to their parents, whose hard work was the very reason for the success that they have today.”