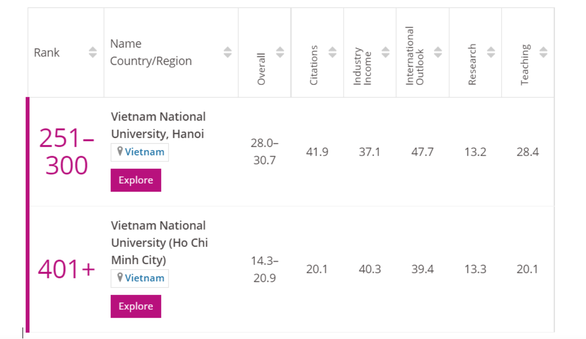 Vietnam’s tertiary education has improved its profile on the global academic map with its two establishments finding their places among the world’s best young universities in 2021, according to the rankings of Times Higher Education.

The two national universities in Hanoi and Ho Chi Minh City have respectively ranked in the tops 251 - 300 and 401+ in the Young University Rankings 2021 published by Times Higher Education (THE) magazine on Wednesday.

In this ranking, THE uses the same appraisal method as applied to its World University Rankings, but the weights of the above criteria have been adjusted to reflect the missions and roles of young universities.

In the Young University Rankings 2021, THE has appraised 475 higher education institutions from 68 countries and territories, an increase of 61 institutions compared to 2020.

Singapore’s Nanyang Technological University topped the 2021 rankings while South Korean universities won three places in the top 10 of the list.

The outstanding performance of young universities in South Korea reflects the growing trend of educational quality improvement as well as steady growth of higher education in Asia.

This is the first year that a large presence of Asian young universities has been seen in the top 10 of the annual Young University Rankings.

The UK continued dominating this year’s rankings with 37 universities, while India and Spain ranked second and third with 34 and 33 educational institutions, respectively.