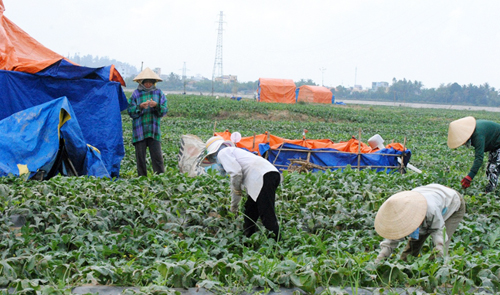 The residents of An Diem village, once a large hamlet in the mountainous area of the central province of Quang Ngai, now lead a nomadic life, having left the village for more fertile land in other provinces.

They are not running after cattle, as other Vietnamese farmers do, but rather planting watermelons, which grow well in fertile soil after each flood season.

Over 500 of the 550 households in the village in Binh Chuong Commune of Binh Son District are leading such nomadic lives, returning home just once a year for a month to celebrate the Lunar New Year (Tet) festival.

A nomadic life for watermelon

After Tet, Nguyen Van Mien loaded his van with the essentials, preparing to leave his village for a fertile plain along the Ba River in the central province of Phu Yen.

With his wife and children, he said goodbye to those staying in the village amidst tears, smiles, and wishes for a good harvest.

“They will only return once in a year, during Tet. I pray for God to help them with a good harvest and high profits,” said Ms. Nam Xi, the mother of Mr. Mien.

Sixteen years ago, An Diem was the poorest village of the commune as it relied purely on farming and was located on an area of impoverished soil surrounded by mountains.

After a single rice season in a year, locals earned their living by going into forests to chop trees and hunt for wild animals and bee honey.

Change came to the locality after several local farmers gathered together and left for new richer soil outside the village. After just one year of watermelon farming, they returned with large profits, enough to repair houses and buy motorbikes and family appliances.

Others followed and have created a nomadic trend in the village. Now, fertile plains along rivers in the central provinces of Quang Ngai, Binh Dinh, Phu Yen, Kon Tum, Dak Lak, and Gia Lai have become lucrative land for An Diem residents.

Le Van Tien, 25, who is growing watermelons along the Tra Khuc River in Quang Ngai, said he could earn VND10 million ($481) each watermelon season from a piece of land 2,000 square meters wide.

Nguyen Phu Nang, head of An Diem village, recalled, “Mr. Lien is the pioneer of this village; he decided to try planting watermelons in 1998. He built a house after just one year. His relatives followed him and now the whole village has followed him.”

“An Diem locals now go anywhere they can cultivate watermelons,” he confirmed.

Thanks to their success, locals chipped in to build roads in the commune.

An Diem, the village of elders and young people

All year round, except for during Tet, An Diem is a village comprised only of elders and youth since all of the adults have left to lead a nomadic life of watermelon farming.

Ms. Pham Thi Anh, 72, said she is caring for her six nieces and nephews, one of whom is only two years old, for all her daughters and sons already left “for watermelon.”

Mr. Nguyen Nhan, 69, was seen walking home from the forest, carrying fire sticks. He could not receive any guests because, he said, “it is now the time to pick up my grandchildren from school.”

“Last year, an elder in this village passed away and we couldn’t carry the coffin to the grave because we were all too old,” said Ms. Xi. “We had to ask for help from the commune’s committee.”

The ambience of the village has become more and more solitary over the last 16 years.

Watermelon only grows well in fresh fertile soil, so An Diem villagers must travel further to find untouched land, said a villager.

Mr. Nguyen Phu, 54, admitted that he could not remember how many places he set foot in so as to grow watermelons during the past one and a half decades.