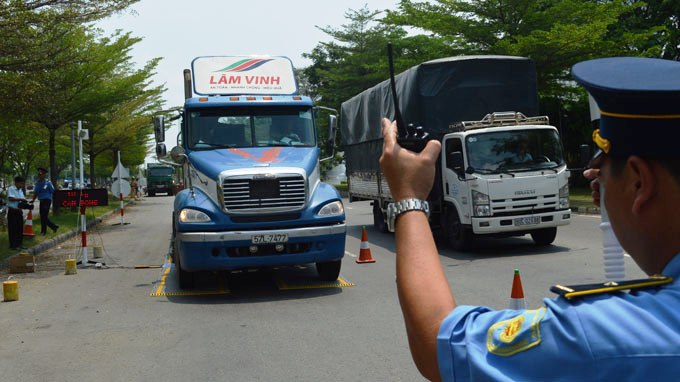 Vietnam currently has many complicated regulations on the loading capacity of trucks, causing great trouble to transport firms, especially after all highways in the nation being permanently watched by mobile weighbridges.

Basically, the trouble occurs in two areas: the difference between road loading capacity pursuant to Vietnamese rules and that under international standards, and the subjective calculations of vehicles' loading capacity.

As a result, an internationally-standardized cargo container imported into Vietnam must be partially emptied to meet the current regulations on the loading capacity of Vietnamese roads.

But a loaded truck that does not exceed the gross weight limit may still be fined if the weight on each of its wheel axles breaks the limit.

The difference between Vietnam’s regulations on trucks’ loading capacity and international standards for the weight of cargo containers has caused problems for import-export companies and transport firms.

Nguyen Thi Hoan, of the Tong Teik Pte Ltd in Ho Chi Minh City, said, “I don’t support overloaded vehicles traveling on the road but I want to call on authorities to re-consider the weight of cargo containers imported from other countries.”

“Firms in Vietnam are passive in working out the weight of cargo containers as it has to comply with international standards,” she added.

It is then at least five tons over the cap set by Vietnamese authorities.

“Now, firms in Vietnam ask partners to stuff no more than 20 tons of cargo in a container. That means Vietnam is setting its own standard which is difficult to be met,” Hoan complained.

What Vietnamese firms are doing now to cope with the controversial regulations on road loading capacity is to unseal containers, partially empty them, and carry the metal boxes to their intended destinations.

Import-export companies and transport firms said the country should improve road quality instead of limiting the loading capacity of trucks, as it goes against universal practices and causes economic losses.

Local firms can lower the gross weight of containers for export, but that will lead to an increase in goods prices resulting from higher transport costs.

A representative of Thien Nam Company, specializing in importing materials at Cat Lai Port in HCMC, admitted that his firm's vehicles had to transport cargo at night to evade mobile weighbridges.

How to calculate gross weight limit in Vietnam?

Circular 03 promulgated by the Ministry of Transport in 2011 stipulates that the weight of cargo carried by a tractor trailer depends on the number of wheel axles the truck has.

Accordingly, a container truck of three axles is allowed to carry a gross weight of 26 tons.

But Nguyen Huu Thang, director of the Long Phu Company, said one of his drivers was fined although he carried merely 24 tons while the gross limit is 26 tons for a three-axle truck.

He was punished because the axle number 3 of the truck was 10 percent overloaded, Thang added.

The problem has also been worsened by truck registration agencies in calculating vehicles’ weight limit.

A container truck registered in 2007 is permitted to transport 19 tons at the most while the limit rises to 23 tons for vehicles registered in 2008. Now a similar truck is given a limit of 30.4 tons.

Transport firms in the central city of Da Nang have argued that the cap has brought about a waste because a container truck which is able to carry 30 tons of cargo abroad is given an only 10-ton limit in Vietnam.

Mobile weighbridges have been deployed on highways across Vietnam as of April 1 and around 800 trucks have been fined for carrying overloads.