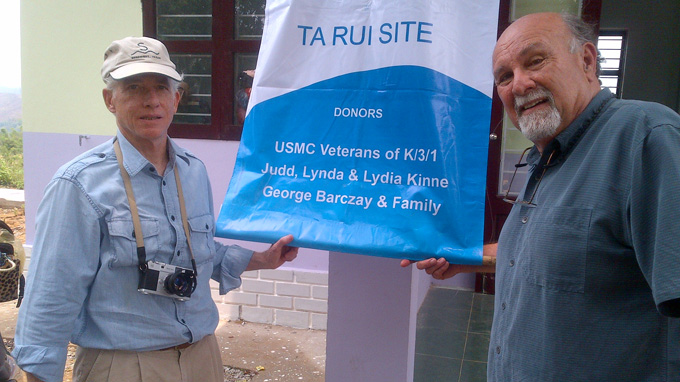 US vets build schools in Vietnam to heal war wounds

Two elderly American veterans have returned to their former battlefield in central Vietnam’s Quang Tri Province to heal war wounds and engage in a clutch of charity activities.

In late April 2014, George Barczay and Judd Kinne, two American veterans in their 70s, returned to Vietnam to join the inauguration of two kindergartens, which they helped raise funds for.

The new facilities, which cost VND1 billion (US$47,000) altogether, have helped give local preschoolers decent places to study.

Barczay and Kinne paid their own VND750 million, with the remaining VND300 million collected from provincial charity organizations.

Barczay joined the U.S. marine force as a communications officer.

In 1967, his unit was stationed in Khe Sanh Combat Base in Quang Tri Province to counter the Vietnamese troops’ offensives. Khe Sanh is now the heart of the province’s Huong Hoa District.

In 1968, when his unit was positioned at the 881 South Height Point, he would shiver at the thousands of tons of bombs which were dropped onto the entire area, annihilating villages and killing countless innocent locals.

The Battle of Khe Sanh, which is considered “the second Dien Bien Phu battle,” and one of the highest-profile ones, was conducted between January 21 and July 9, 1968 during the American war in Vietnam.

Barczay himself was trapped in a trench on the 881 South Height Point for more than one month. He experienced awful feelings of hunger, fear and devastation just like what the locals around him went through.

After the Khe Sanh battle, these haunting memories began to obsess him. Until recent years, due to his gnawing guilt complex, he still could not watch the footage on the war on the Internet.

“It was a peaceful, rustic land until we brought weaponry and devastation to it. I can’t have my peace of mind until I do something to heal the war wounds,” the guilt-stricken veteran would tell his wife.

Barczay and Kinne had never met during their service in the war. They first met on the day when they were discharged from the army.

Signing up for the same university, the two men’s friendship gradually bloomed and they have many things in common, including their wish to do something for Khe Sanh.

Over the past 20 years, they have been saving and raising money for the fund, which they call “the Khe Sanh wound-healing fund.”

The duo have also received enthusiastic support from their former compatriots.

Barczay shared that when they first saved and raised money, they had yet to devise a specific plan for how to help people in Khe Sanh. One day they happened to watch a documentary on the hardship students in mountainous Huong Hoa District experienced as they studied in makeshift, shabby classes, which were flattened every stormy season.

They then came up with the idea of building schools, as they felt urged to sow the seeds of future generations in the war-battered area.

In late 2013, Barczay had serious health problems and had much difficulty moving.

Concerned that time might run out soon, he and Kinne decided to make their first return to Khe Sanh to scour for locations and make necessary preparations for their project of building the two kindergartens on the site plagued by war devastation.

The two old men helped each other scale the hills to visit the Khe Sanh Combat Base, where wartime memories flooded back.

Half a year later, the two kindergartens were built and opened to all local kids, especially those of Pa Co and Van Kieu ethnic minorities.