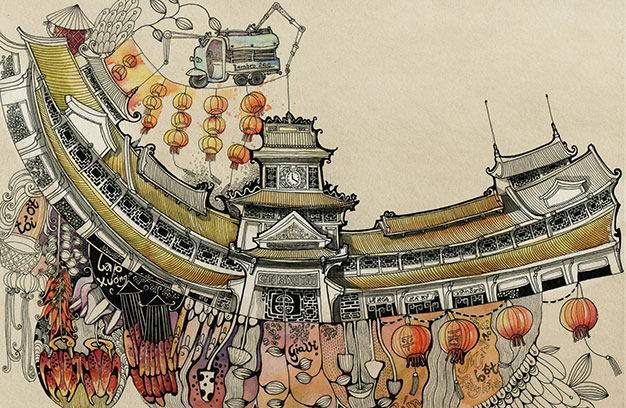 A young architect has decided to demonstrate his love for Saigon by publishing a book featuring his own sketches of the city in the old times and its hallmark architecture and lifestyle.

The book, in both Vietnamese and English, depicts over 12 of the city’s signature edifices and part of the role they play in local residents’ life.

The publication also boasts two ancillary sections of “The Urban Portrait” and an overview of Saigon residents’ major means of transport in different periods.

The book offers readers different perspectives on the city and its time-honored edifices, and arouses a wide spectrum of emotions among readers – including nostalgia for the elderly and middle-aged and novelty for tourists, particularly foreigners and young generations.

Trong said he has adorned his sketches with art-line strokes to add richness to the mansions, most of which are heavily influenced by French architecture.

He incorporates many images of fish, bananas, coconut fruits, and durians as well as the authentic images depicted on the market’s entrances into his paintings of the city’s iconic Ben Thanh Market in the downtown area.

Trong also ingeniously arranges a slew of insets in the larger image of a chicken while sketching the 134-year-old Saigon Tax Trade Center, part of which was shut down in October this year to make room for a subway project, as the chicken is the center’s main symbol.

“I spent much time gathering materials from different sources on the mansions to pick up their most distinctive features. For example, during its early days the Saigon Tax Trade Center featured a relief acronym of GMC (Grands Magasins Charner, or Department Store) on its front. Though the acronym was gone after several revamps, I retain it to pay my due respect to history and the bygone era,” Trong explained.

Meanwhile, his sketches of the Notre Dame Cathedral are embellished with fairy, art-line elements and transport balloons.

The young man also draws trees, which have been felled to make room for construction projects, in the downtown area.

Born in the south-central province of Ninh Thuan, Trong has lived in Saigon for 13 years now and considers the city his second hometown.

“Like most kids, I was thrilled every time my parents took me to Saigon. Later, as an architecture major at university, I would spend hours sketching the Notre Dame Cathedral and the Reunification Palace in District 1. The sketching sessions, along with other experiences, instilled and nurtured my affection for the city,” he said.   The man started working on his book two years ago, and began sketching with all his love for the city’s century-old edifices such as Nha Rong (Dragon House) Harbor in District 4, Central Post Office and Municipal Theater in District 1, and Binh Tay Market in District 6.

“While most keen on old-time Saigon can find abundant information in researchers’ comprehensive works, my book offers tourists a glimpse of how the city’s architecture is perceived in a young person’s eyes,” Trong noted.

The book also provides readers with a visually striking map of the city’s mansions in a chronological order based on the time when they were built, the young architect added.

“Trong’s book leaves me upbeat about the young generation, who expresses their pride and fondness for the city’s bygone age though they have no first-hand experience about it whatsoever,” commented journalist Pham Cong Luan – one of the successful authors on Saigon.

According to local newswires, Trong claimed the first prize for his design for the city’s iconic Tet (Lunar New Year) flower street in 2011.

Infatuated with mermaids, most of his architectural designs are suggestive of their image.

Trong’s “Saigon Xua” project has drawn almost 25,000 likes and shares of the sketches which are posted on its Facebook and website at www.saigonsaigon.vn.