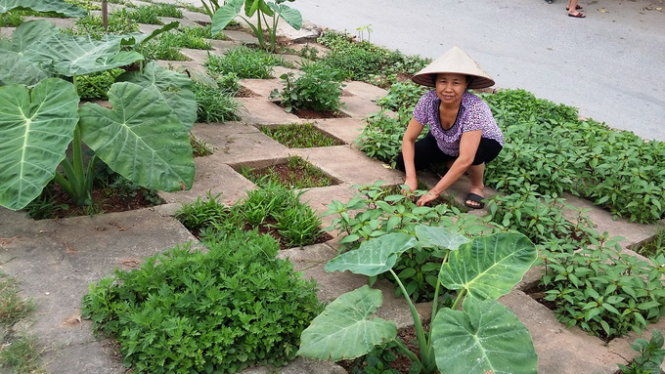 In recent years, deterred by rampant unsafe vegetables and even their so-called “safe” counterparts, more people in Vietnam have taken matters into their own hands by only consuming their home-grown veggies.

As tainted veggies which pose serious health hazards to consumers are rife on the local market, including those imported from China, an increasing number of housewives have removed vegetables available there from their daily menus.

They then turn to greens which are labeled “clean” and cross their fingers that their purchases do not contain an excessive amount of banned chemicals or pesticide residue as advertised.

Most consumers buy products based on their experience, as vegetables sold at markets do not come with packaging or labels from the producers and suppliers.

In doubt about the safety of vegetables on the market, many customers pin their hopes on the clean greens sold at supermarkets, though they usually cost much more. However, there is no guarantee that these greens are truly safe either, as only a small proportion of vegetables in supermarkets are sold with labels bearing the suppliers' names, whereas the majority of them are no different from those at the market.

Many Tuoi Tre (Youth) newspaper readers said they have recently decided to trust clean produce, but most are clueless as to how “clean” they are.

These dismayed consumers have come up with a more cost-effective, fail-safe approach: growing their own veggies or getting agricultural specialists to tend to them in their rented areas or in their own gardens or terraces.

The practice also serves as an eco-friendly, rewarding pastime, provides opportunities for family get-togethers and helps growers and their families, particularly children, better appreciate the fruits of their labor.

Many Hanoi residents have taken up the practice and rented land plots and hired farmers in suburban areas to grow and harvest safe greens for them.

Ngo Xuan Quynh, 30, residing in Thanh Xuan District, and his wife decided to rent a 35-square-meter plot located beneath the Nhat Tan Bridge in Tay Ho District for the cultivation of safe veggies.

They find the monthly expense of VND1.5 million (US$70) good value for the money, as they receive fresh, hygienically ensured vegetables in return.

"We have a four-story house, but the polluted city air is no breeding ground for clean veggies. We find the service of leasing land plots and growing greens for city dwellers like us really helpful," Quynh said.

A young mother and her two kids are pictured harvesting their veggies in Ho Chi Minh City. Photo: Tuoi Tre

Vu Anh Hien, also in Thanh Xuan District, eagerly said he has benefited from the service, which allows him ready access to fresh, safe veggies.

Hien, who previously worked as a produce transporter, was put off consuming vegetables from the market due to the regular sight of farmers abusing growth stimulants and pesticide when he carried loads to and from the farms.

Hoang Danh Tung, director of Online Vegetables Service Co., told Tuoi Tre that he rents a large area on a mound amidst the Hong (Red) River – one of the north’s largest – and divided it into lots of around 35 and 40 square meters where quality greens are grown on clients’ demand.

“We provide our clients with counselling and training, harvest and deliver the produce to their homes. They are free to visit their veggy beds any time,” the 27-year-old man said.

Tung assured that his veggy fields are tended to only with microbiological, organic fertilizers, and organic traps are adopted to cope with pests.

Nguyen Van Hieu, an agricultural engineer who has launched a similar service within Gia Lam District, told Phap Luat TPHCM (Ho Chu Minh City Law) newspaper that the service is thriving, and his staff has their hands full catering to the soaring demand.

An increasing number of Ho Chi Minh City residents are also eager to turn any space possible in their homes into veggy beds.

Nguyen Ngoc Khuyen, who lives in District 12, has come up with a model which combines waste processing and veggy growing, Tuoi Tre reported.

He makes use of his family’s organic waste, including veggy peels and food leftovers, which he turns into humus.

The model has provided his family of six with abundant clean supplies of greens and saved them the garbage collection fees.

He also innovatively built another model which uses fish dung to fertilize veggies, thus allowing him access to hygienically ensured, nourishing greens and fish at the same time.

His products have been in good demand from consumers across the country.

Two local universities have also offered to cooperate with him to further study and expand his models.

Public spaces in neighborhoods throughout Ho Chi Minh City, including apartment buildings, have been increasingly used for beds of common varieties of veggies and herbs.

Many even grow their veggies beneath their beds as a way to cope with their homes’ limited space.

Residents in the central city of Da Nang have also keenly embraced the trend.

According to the municipal Women’s Union, the organization has launched campaigns to promote green lifestyles among city dwellers since 2010.

Many of its members have since taken to producing organic manure and growing safe greens at home.

Among them is Tran Thi Thuan, chair of the Son Tra District Women’s Union, who has become a big fan of home-grown veggies.

Thuan and her husband have turned their 100-square-meter terrace into a well-organized veggy field which boasts a wide array of varieties in different seasons.

Her yields are big enough to sustain her family’s meals while also providing gifts or goods for her neighbors and friends.

However, Phap Luat TPHCM cited some economists who expressed their concerns that the approach, which turns urban areas into rural ones instead of the other way round, is short-term only.

They urged that more safe veggy fields on a considerably larger, professional scale be established to cater to consumers’ rising demand for truly hygientically ensured veggies, and measures be adopted to revive consumer trust in the local agriculture sector, supermarkets and conventional markets.