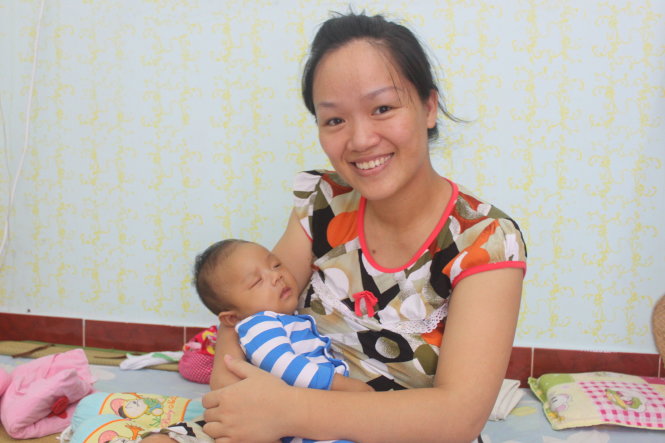 A woman has adamantly refused to give up on her baby son, who was jerked back from the grip of death due to a less common illness, and persisted in his battle against multiple disabilities over the past one year.

Since giving birth to her second child16 months ago, Ha Thi Quynh Nga, 37, who resides in Bac Tu Liem District in Hanoi, has tirelessly tended to the baby son for months on end at a go in hospital for his blood exchanges and physical therapy sessions.

Her eldest daughter was born and grew up healthily.

However, during Nga’s two following deliveries, her two newborns grew increasingly faint and suffered labored breathing before passing away only four to five after birth.

Their deaths baffled the doctors, however.

Tests confirmed that the little boy, who has RH- a rare blood type, suffers blood contamination and needed transfusion.

Dang was instantly rushed to the  Central Pediatrics Hospital, while his mother, who had just undergone a surgery, was in intensive care at the National Hospital of Obstetrics and Gynecology.

There she kept a diary as a prayer for her little man’s survival and to soothe herself.

“On June 7, 2014, you were lying there, with your cheeks reddened by constant contact with tubes. Your father and I remained hopeful that you can still breathe on your own and show no abnormal signs.

9:00 am on the second day following your birth, your father called and told me you need a transfusion. Luckily, I stumbled upon the phone number of Uncle Dung- vice chair of the Hanoi Rare Blood Type Club, who then contacted Uncle Minh for his blood.

Bad news came again on the third day. The doctors said they have put you on a respiratory apparatus, and your blood pressure was unstable. Your father and I were devastated.

Beyond our expectations, my brief plea for blood on Facebook was embraced with hundreds of phone calls during the two days. Some 100 potential donors also offered their blood to help save your help.

“On the fourth day, the doctors still anticipated that your condition would worsen. Dr. Huyen Maika advised me to keep my composure as your chance of survival was a mere 50 percent. I told her that even though the chances dropped to only 10 percent, I would remain expectant that you would pull through.

On the seventh day, my tireless insistence on seeing you, yet briefly, finally met with the doctors’ nod. Just be brave, my little man.

The doctors warned as there are very few cases who undergo third blood exchanges like you did, you were highly likely to suffer blood contamination.

I earnestly hoped that they made a wrong diagnosis.

On the 9th day, your maternal grandmother and I burst into tears when I was summoned to provide care for you.      6:00pm on the 10th day, I finally had you in my arms.”

After the 16-day hospitalization, Dang was discharged.

His family’s elation was short-lived as  he soon got a high fever and was hospitalized again.

Undaunted by the prospect that her son would suffer mental retardation later as many warned, Nga single-mindedly cared for her son in hospital for two months.

The debilitating condition has left the little boy unable to sit properly.

As her husband works far away from home, Nga cares for her baby on her own.

She took Dang to a private center for physical therapy sessions six mornings a week, and accompanied him to the pediatrics hospital for more mobility exercise three afternoons each week.

The devoted mother was always by her son’s side during X-rays, tests and treatment of his gall disease.

“I’m convinced that I can help my baby combat his muscle feebleness thanks to constant therapy. What has concerned me most is that his hearing ability would be impaired,” Nga shared.

Dang can hear now but he fails to tell one sound from another.

She was told that in the worst case scenario, her baby son would need a cochlea surgery in his ears, which cost around US$50,000, excluding operation costs.

“If necessary, I will sell my house for the money,” she said.

Despite daunting hurdles, Nga remains hopeful that her son would walk more properly after two years of therapy and only need hearing aids instead of the costly surgery.

She and her husband had named their son “Hai Dang,” or “lighthouse” in English, cherishing hopes that his will to live on and combat disabilities would never fade out.

According to a doctor who treated Dang at the National Pediatrics Hospital, inconsistency between the mother’s and son’s blood is responsible for Dang’s yellowing skin and life-threatening blood condition.