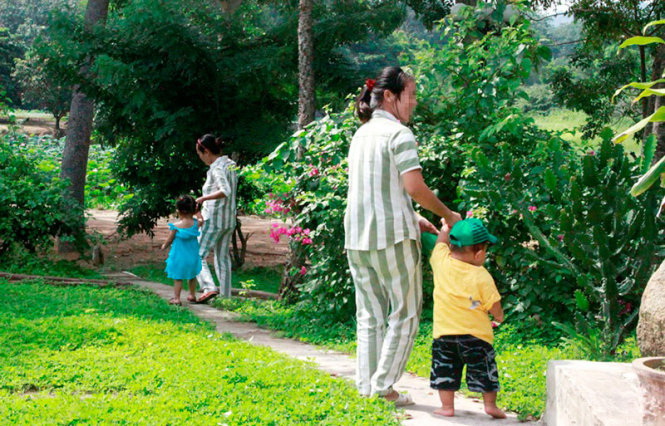 Dozens of nursing inmates at a prison located in south-central Vietnam are provided with conditions to care for their babies.

>> Vietnamese convicts’ children – Part 1: How badly they need their parents

>> Vietnamese convicts’ children – Part 3: Where is my child?

Recently, two inmates were seen walking their toddlers leisurely within the prison’s premises.

Except for the mothers’ prison-striped uniforms and the presence of officers, it would be hard to tell the penitentiary from a park.

Among the 22 nursing inmates at Thu Duc Prison is T.T.K.G., 38, who is doing her time for running a prostitution ring.

G. told Tuoi Tre (Youth) newspaper reporters that she has three kids altogether, with the first two from her previous marriage staying with her parents.

She has not heard from her ex-husband since her imprisonment.

“My elderly parents cannot afford to take my two elder kids, who are also at a tender age, to visit me here. Thankfully, I still have my youngest baby with me,” she exclaimed.

“We are well cared for, both physically and mentally. Healthcare staff provide us with proper medical attention, and my cellmates are really sympathetic and helpful.”

The mother added that she has not seen her two eldest kids since she gave birth to her youngest, when relatives were allowed to visit her shortly after her delivery.

“Right after my delivery, I came back to prison without asking to have my sentence suspended so I could nurse my newborn, as I still have to serve my jail term and be away from my kids sooner or later anyway,” G. revealed.

Another nursing prisoner at the institution is T. T. T., 33, who is serving her sentence for assault.

T., who has a fair complexion and a gentle-looking face, said that she had never been involved in a row with anyone until the day when an unknown man stormed into their home in the north-central province of Nghe An for her husband at midnight.

“Scared that I might get raped, I shouted out and hit him repeatedly with a stick. The intruder then fled on a motorbike before he slammed into a wall, sustaining serious injuries. I was indicted for that,” T. recalled.

T. is now serving her sentence while tending to her 13-month-old infant at the same time.

She is more fortunate than many other female prisoners in that her husband has not deserted her and visits her on a regular basis.

“We nursing inmates are allowed more favorable conditions compared to others, as we only work four hours a day,” T. added.

While some of the 22 inmates with young children are looked after properly by their families, others with babies are by their own husbands and kin.

“Those receiving supplies, including powdered milk, from their loved ones usually share them with ignored mothers,” T. stressed.

The prison’s nursery is an octagonal, drafty structure surrounded by well-equipped, newly-built rooms.

The rooms boast beds, shelves, and enclosed restrooms with showers and clean floors.

“The chief prison warder came up with the idea of building the nursery and a set of rooms. He requested that we make sure the environs best resembles what is out there in society, so as to avoid mental scars among the kids later on,” Senior Lieutenant Vu Thi Nga, jailer of Detention Quarter 2, said.

The nursery is bordered by lush greenery dotted with miniature ornamental rockwork and swings.

Its walls are covered with richly colored paintings from fairy tales.

Two kids sway and hum to a song by their favorite child singer.

The nanny, who is also an inmate, enthusiastically spurs them on.

In another corner, a child pretends to feed teddy bears with milk, while several others lie idle on hammocks.

“Most women take their infants here due to financial difficulty or lack of proper care at home. However, rules stipulate that the kids have to part with their mothers as soon as they turn three, and will be taken to social welfare centers if their relatives fail to take them home,” Major Lai Van Nghia, head of Division Quarter 2 at Thu Duc Prison, revealed.

Colonel Tran Huu Thong, a warder of Thu Duc Prison, said the prison crèche is undeniably not as well equipped as its counterparts out there in society and is subject to strict discipline and surveillance.

“However, we’ve always tried to ensure the kids the best living conditions and premium children’s products,” he added.

Major Bui The Cong, who was in charge of the construction of the nursery and its environs at Detention Quarter 2, noted that the kids’ sleeping area is also specially designed so that the space is airy, clean and provides enough warmth.