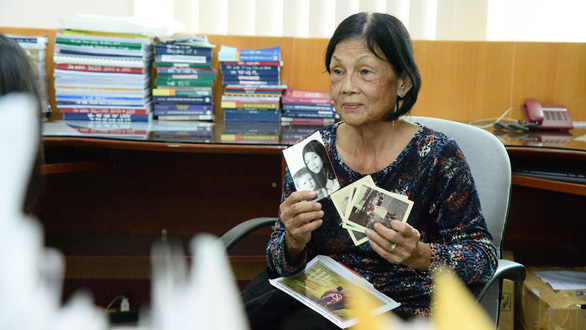 Since the war in Vietnam ended in 1975, a Vietnamese mother has never given up her search for a daughter who was evacuated from the country during the last days of the Saigon regime.

Born in 1949 in Saigon, the former name of Ho Chi Minh City, Nguyen Thi Dep remembers details of her younger life as if it was just yesterday.

“I loved listening to western music and learning English, which was mostly self-taught since we couldn’t afford formal English lessons,” Dep said.

In 1968, at 19, Dep started working as a maid at a U.S. military base in the southern province of Dong Nai.

With her good command of English, Dep was soon assigned to a new position as a call operator for the base, where she met and fell in love with a military band member.

“I got pregnant with his child in 1971,” Dep said, referring to her old love as Joe.

“We had just learnt of the news and were still trying to figure out our future when Joe received an order to return to the U.S., as it was the end of his service,” she said.

“We kept in contact for another year before I stopped hearing from Joe.”

Dep gave birth to her daughter, whom she names Nguyen Thi Phuong Mai, on January 5, 1972.

She quitted her job the following year after the signing of the Paris Peace Accords, which aimed to end the war that had been ravaging the country and resulted in the withdrawal of U.S. troops from Vietnam.

By April 1975, the war had been approaching its last days, and rumors of a ‘bloodbath’ coming to Saigon began to spread like wildfire.

Dep was concerned for the safety of her daughter, a half-American girl with brown hair and brown eyes.

“Then someone told me about Operation Babylift that the Americans were conducting,” Dep recalled.

Operation Babylift was a mass evacuation of Vietnamese children to the U.S. and some other countries conducted by the U.S. air force under orders from U.S. President Gerald Ford during the last days of the war in Vietnam in April 1975.

“I wanted to make sure that my daughter would survive, so I brought her to an orphan camp and had her airlifted to the U.S.,” Dep said.

“I didn’t want to leave Vietnam. As the oldest child, I had to stay in Saigon to take care of my parents and my younger siblings,” she explained her decision to part with her three-year-old daughter.

Dep never got remarried, and Phuong Mai remains her one and only child after all these years.

Now working as a janitor at a school in Ho Chi Minh City, Dep said never has a day gone by without her thinking about how her daughter must be living.

“I hope and believe that my daughter has been loved by her foster parents and is leading a happy life,” Dep said.

“But there are still so many things that I want to know about my daughter, so many questions that need answering before I’m laid to rest.”

Dep has tried reaching out to other Babylift children who have returned to Vietnam searching for their biological parents, but her efforts have been in vain.

The only thing she could confirm was that her daughter’s father, Joe, passed away in 2013.

“I knew my case would be difficult, as Phuong Mai was taken to the U.S. when she was only three years old, too young to have any memory of her time in Vietnam,” Dep said.

“With her light skin and brown hair, it would be difficult for Phuong Mai to know she was different from others if her foster parents decide not to tell her about her Vietnamese origin,” she added.

When dropping her daughter off at the airbase, Dep had packed with the baby girl a photo she took of the two of them, hoping that one day Phuong Mai would see the photo and know that a mother was still waiting for her in Vietnam.