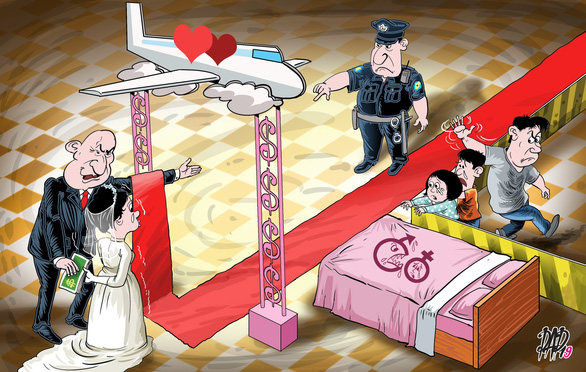 To many Vietnamese, sham marriages with Americans may not be the right move

Vietnamese citizens who count on phony marriage contracts with Americans as a chance to settle in what they believe to be the ‘promised land’ may find themselves tied up in the wrong knot.

In May 2019, a crime ring specializing in arranging phony marriages for Vietnamese nationals was busted in Houston, Texas, resulting in nearly 100 arrests.

Nguyen had been running a massive operation involving dozens of Vietnamese immigrants who hoped to attain legal status through green-card marriages in the United States, according to Houston Chronicle newspaper.

The newspaper said Nguyen reportedly charged US$70,000 per customer for a “full-package service.”

But while many Vietnamese equate immigrating to the U.S. to making steps toward heaven, the reality is that it is often fraught with severe and devastating consequences.

Three years of tears in the States

“Mom, I just want to go home,” T., a Vietnamese who moved to the U.S. through a fake marriage, cried out over the phone to her mother in Vietnam in 2016.

It took 12 months of hard work after that phone call, but T. eventually made it back to Vietnam, ready to restart her life at the age of 40.

It will be her third, including her dreadful sham marriage in the States.

According to T., her first marriage had been going well until she and her first ex-husband decided to divorce so that they could partake in a sham marriage scheme in the hope of relocating to the U.S.

“My husband’s family strongly opposed the idea because it was so risky and they thought I would lose my family,” T. said.

“But we got carried away with the idea of a brighter future for our children after hearing that others had been successful doing it this way.”

Via a network of connections, T. and her husband were eventually able to have their respective fake marriages arranged.

In August 2014, T. and her children arrived in the U.S. with a plan to be reunited as a family in six months, preceded by a legal divorce from their respective U.S. partners.

During this time, T. and her children would live with her new ‘husband’ in order to ward off any unannounced visit from local authorities.

“He and I lived in the same house but in different rooms. It was ok at first,” she said.

“He was willing to help us blend in, teach us English, and take us to the market.

"Eventually though, he started to ask for sex. Every other day he would sneak into my room and hint at his desire.”

Eventually his pressure became too much and T. knew she had to make a decision.

“I was about to report him, but he said he would tell the police about the fake marriage, and I would be deported,” T. said.

After consulting her family and friends, T. decided that reporting her ‘husband’ was the best possible move for her family and by 2017 she and her children were deported.

However, by the time of their deportation, T.'s husband had finished his paperwork to move to the U.S. with his new ‘wife’ and, as it turned out, the two seemed to have genuinely fallen in love.

In the end, T. wound up losing $70,000, a husband, and several years of happiness, all for the dream of moving to America.

“Sham marriage schemes are worth a lot of money, but the U.S. partner just wants sex. That’s the norm,” said K., a Vietnamese American in California.

As her ‘husband’ kept demanding sexual intercourse, she fled from the bogus wedlock and met K. by chance.

K. provided support for the woman and later married her.

The daughter of H., a woman from Phu Nhuan District, Ho Chi Minh City, experienced a loss of both money and dignity from a sham marriage in Canada.

In 2017, H. sent her daughter to Canada to enroll in an English course at a college in Toronto.

Unfortunately, the prospective partner turned out to be a gambler.

Her daughter refused to give him the weekly money he demanded and decisively ended the deal when her partner wanted to raise the fee to CA$50,000 ($38,000), plus sex.

Their 30 percent deposit went down the drain.

A Vietnamese man who now works for an Australian newspaper calls these fake marriages ‘an anxious American dream.’

According to him, all these plots boil down to money and the thought of a new and possibly better settlement.

“The consequences are that you may have to trade your body or your money,” he said.

“It will haunt you for the rest of your life, whether you get what you wanted or not.”