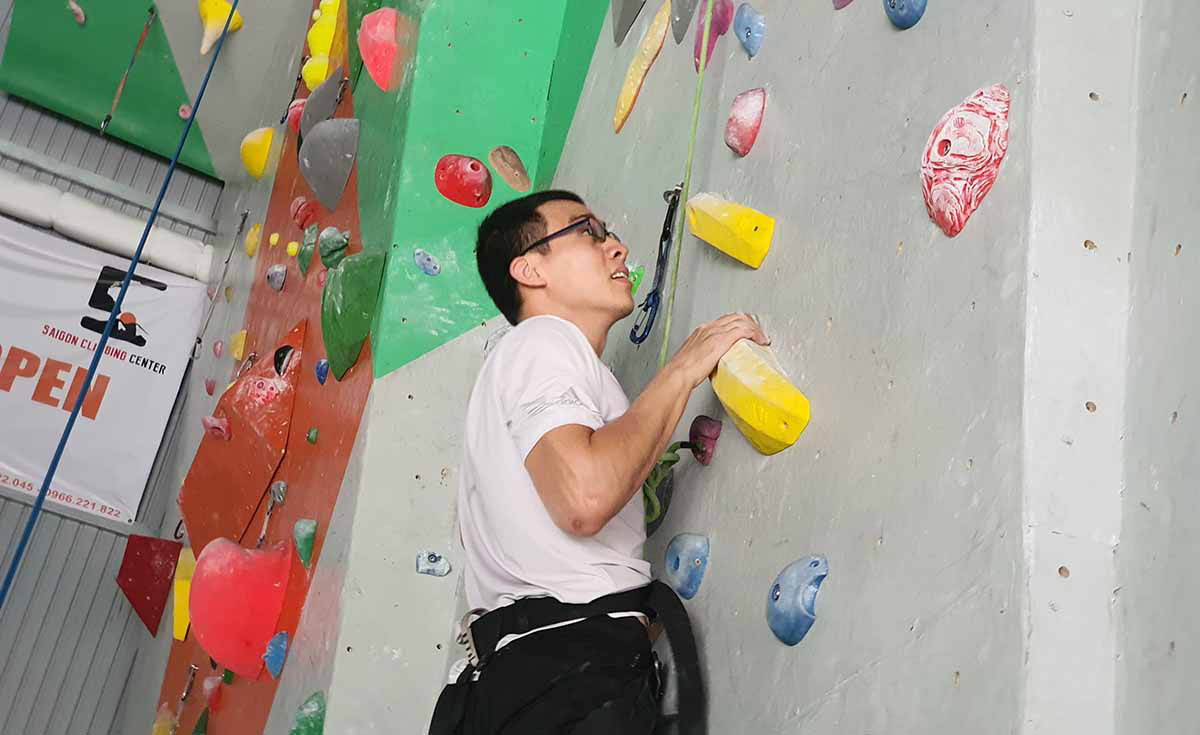 Nguyen Duc Tho, the owner of Saigon Climbing Center in Binh Thanh District, is astounded by the boom in rock climbing in Saigon, the former name for Ho Chi Minh City.

According to Tho, the sport has only began gaining traction in the southern metropolis over the past 2-3 years. The biggest hurdle to spreading awareness of the sport, he says, is the name.

In Vietnamese, rock climbing is translated as “mountain climbing,” invoking images of climbing real mountains. It is only in the last few years that many Vietnamese have learned that indoor rock climbing walls exist.

A route to the top

Every weekend, dozens of Vietnamese and foreigners head to the Climbing Center in a bid to conquer the red, blue, purple, and yellow color-coded routes on the center’s climbing walls.

The center bursts at the seams on a midweek afternoon.

Tho, a three-time champion of the Vietnamese version of Sasuke – a Japanese TV game show in which 100 competitors attempt to make it through a four-stage obstacle course – fell in love with climbing while competing on the show and decided to team up with some friends to open the center.

“First I wanted to satisfy my own climbing needs. Then I wanted to create an environment for young people like me to practice indoor climbing,” he said.

Though the group did not have much money, they were able to find a location in a small alley on Nguyen Gia Tri Street in Binh Thanh District to open their center.

“We did mostly everything ourselves to cut costs. We designed the whole place, set up the walls, assembled the parts, and went abroad to select the most climbing walls,” Tho explained.

When the center first opened, the visitors were mostly foreigners, especially Japanese. Since then, the number of Vietnamese climbers has gradually ballooned and now accounts for 50 percent.

Tho explained that part of the appeal is that rock climbing is a full-body sport which requires the entire body, including the arms, legs, back and abdomen to work in unison, making it the perfect option for a holistic workout that can help reduce body fat and sculpt muscles.

“It’s also highly intellectual. It calls for critical thinking and bravery,” Tho said. “We design the climbing routes in a way that requires climbers to gauge their every move carefully and calculate their body weight distribution. Strength alone is not enough to master the routes.”

When he was introduced to this sport, the 1.6-meter undergraduate weighed a mere 50 kilograms, but after just five months of hard work, the sophomore at the Ho Chi Minh City University of Medicine and Pharmacy has gained seven kilograms and now rocks six-pack abs.

Hau had already become familiar with TV programs and online videos featuring wall climbing before moving to Ho Chi Minh City, but had never tried them for himself. Coming to the city for school gave him a chance to discover the climbing center and realize his passion.

He has been an active climber ever since. In fact, he loves climbing so much he has even started working part-time on the weekend at the Climbing Center.

Office worker Tran Minh Hoa, 25, is another regular at the Saigon Climbing Center.

“I was blown away right from the first day,” Hoa shared.

“The best part of it was the feeling of conquering the wall. It feels truly amazing to conquer a climbing route each day, or even half a new route that’s more challenging.”

He further explained that climbing walls is addictive in a similar way to playing video games because there are so many different options and ways to challenge oneself.

“The more you practice, the higher your skill level. It’s like in a video game where you can get a higher rank,” he explained.

The easy routes he started with were simple enough to finish with just three days of practice, but the level of difficulty soon doubled and each route took gradually more time, skill, and muscle.

“There were times when I had to give up even though the finish line was just one or two blocks away. I was simply exhausted so there was no choice but to have another try later,” Hoa said.

“Such failures strengthened my will and persistence. I was always motivated to conquer the route.”

According to Hoa, before he started rock climbing he weighted 71kg. Now he is down to 65kg and also sports a set of abs.

“Climbing also helps me get rid of negative thoughts in my life and work. I believe every climber will have their own unique experiences.”