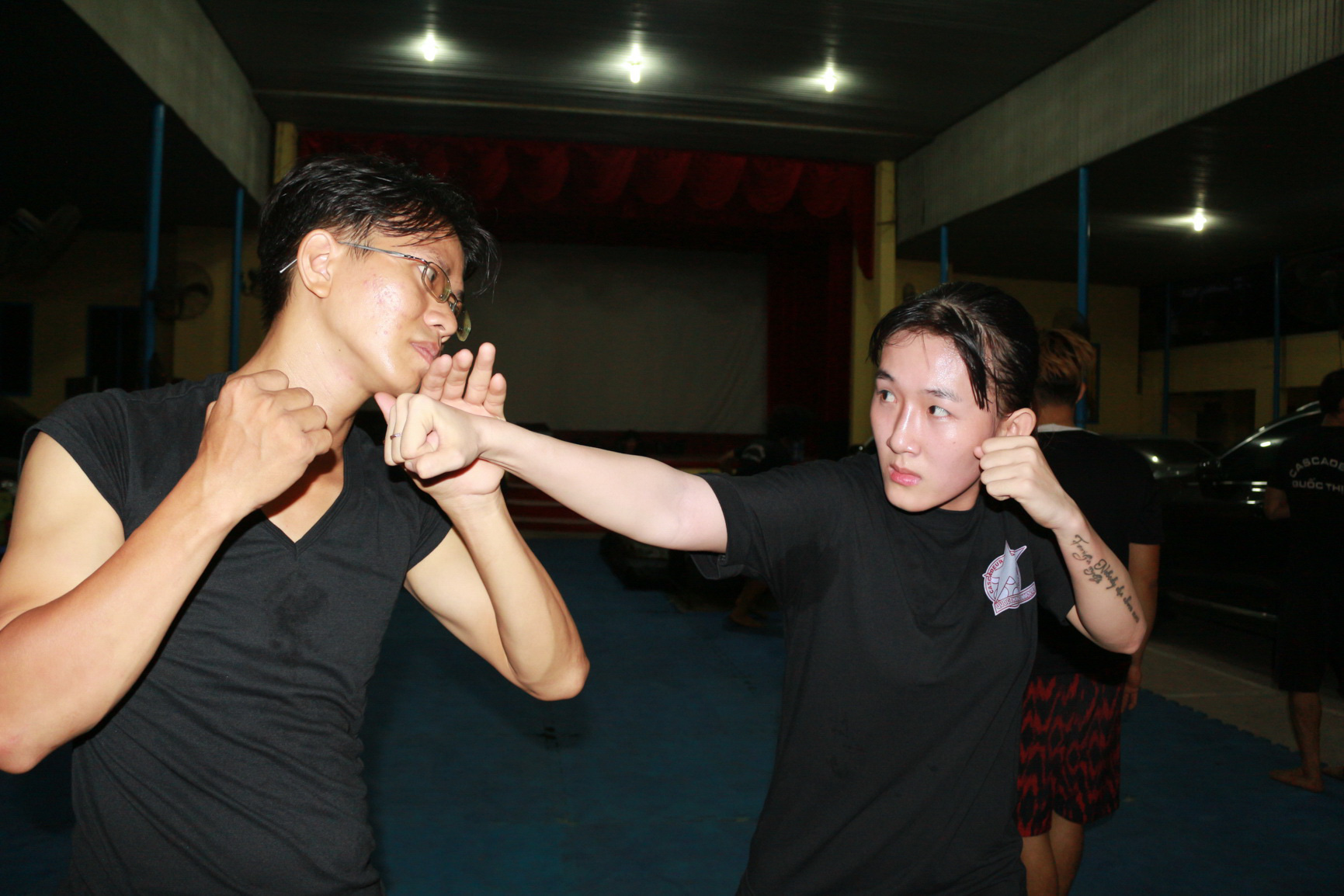 Martial arts are booming in popularity amongst young women in Ho Chi Minh City as a means of staying active without logging long hours on a treadmill.

Studios specializing in martial arts from Vietnam, as well as from other countries throughout Asia, are popping up in neighborhoods all around the southern metropolis, drawing in crowds of locals looking to learn a new sport and get some exercise without the monotony of a boring gym routine.

Sisters Tran My Hoa and Tran My Linh are two young locals who first began learning Taekwondo three years ago and have since fallen in love with the Korean martial art, adding the sport to their daily routines in order to stay fit.

Hoa and Linh’s reason for taking up Taekwondo was pretty simple.

“We wantedl ong legs. We heard that our legs would actually grow because Taekwondo requires a lot of leg moves,” they said, laughing.

Though 70 percent of Taekwondo moves do involve using legs, it is pretty unlikely the sport will make the sisters any taller. Still, it has transformed the duo into a fighting force to be reckoned with.

The sisters’ daily routine starts each morning at 5:00 am with a training session on their rooftop in Tan Binh District, when most people are still sound asleep.

Occasionally, their neighbors catch their early morning workout and are not shy about letting Hoa and Linh know how impressive their front, jump, flying side, and tornado kicks have become.

Aside from their morning rooftop session, they also train with a coach three times a week.

In addition to improving their strength, stamina, and flexibility, both Hoa and Linh say it has given them confidence in their abilities to protect themselves.

“Before all this, we were really low on energy, even when we only went out on short runs,” the two black belts said. “Now we’re able to run many kilometers and aren’t even scared to be out alone at night.”

Martial arts as a career

Tu Phan definitely stands out from the boys at the Quoc Thinh Cascadeur Martial Arts Club in Ho Chi Minh City. After all, the 20-year-old is the only female registered to train at the club.

Phan has been training Vovinam – Vietnam’s traditional martial art – since middle school and, after impressing her coach, was advised to apply to the High School for the Gifted in Sports in Ben Tre Province, a few hours south of Ho Chi Minh City.

In 2018, after three years of excelling both academically and athletically, Phan moved to Ho Chi Minh City to study acting at now-closed Hong Van Theater in Phu Nhuan District. Of course, she has not left Vovinam behind.

At 7:00 pm each evening, she heads to the Quoc Thinh Cascadeur Martial Arts Club for a training session in the hope of one day making it big as a cinema kung-fu stuntwoman.

Though many at the club are impressed by her skills, Phan says others try and discourage her by saying she will one day be forced to quit due to injuries and over exhaustion.

A perfectionist at heart, Phan spent her entire first week at the Quoc Thinh Cascadeur Martial Arts Club doing nothing but practicing her kick until she felt that she had mastered the technique.

“All the other girls who tried to train in the same way quit after a few days,” she recalled.

Quan says she became hooked on martial arts after she was stunned by Hong Kong actress Shu Qi’s performance in the 2002 film 'So Close.'

She first started her martial arts training at the Quoc Thinh Cascadeur Martial Arts Club in order to prepare for her role in the 2013 Vietnamese television series Mat na (The Mask). It only took one training session before she was hooked.

“At that time martial arts became my passion and chance to star in more movies, especially those with major female action roles,” she explained.

Though she has not yet ‘made it’ as a lead kung-fu actress, her skills have earned her several stuntwoman jobs in Vietnamese films such as Lost in Saigon, Anonymous, and The Handmaiden.

Reflecting on her martial arts journey, Bao said she was extremely nervous at first, especially while participating in training sessions with other actors who had already had a wealth of experience.

She also shared the pain she felt after each of her first few training sessions almost forced her to give up.

“I was in agony every night but I became more confident over time,” she said.

Now, seven years later, the young actress is glad she stuck with it.

“The biggest improvement in my life was my health. I’m much stronger and fitter than other girls. [Martial arts] keep my body in great shape,” she said.

According to Bao, the skills she has gained from her martial arts training have found their way into her daily life.

“Before martial arts, I couldn’t even ride my bike because I was afraid of hitting someone. My hands were always shaking,” she recounted.

“But now I’m better prepared for mishaps on the road. I’m sure I can survive any accident safe and sound.”