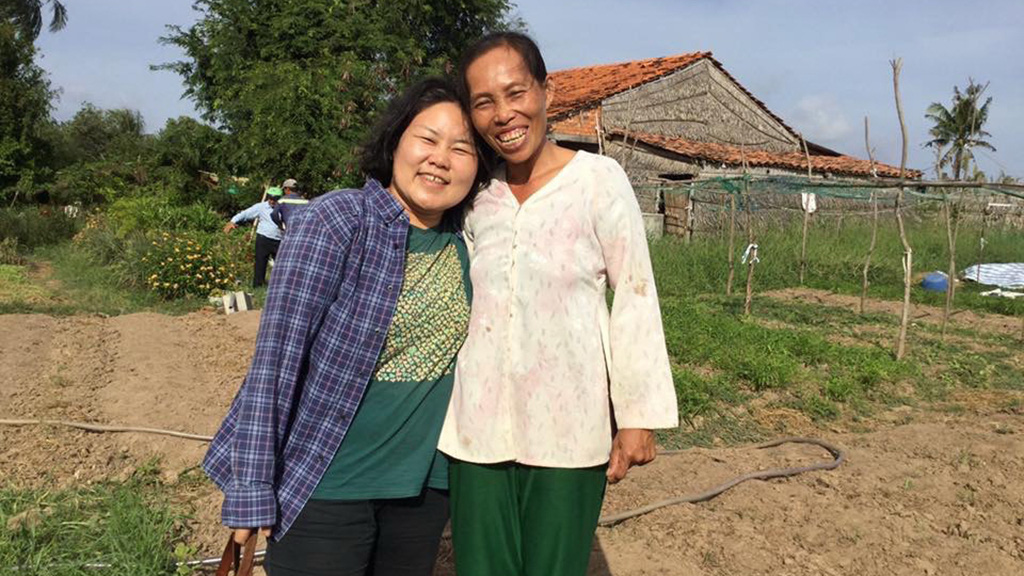 This Japanese woman is spreading seeds of organic agriculture throughout Vietnam

Ino Mayu, 45, has spent nearly half of her life in Vietnam, playing a pivotal role in challenging long-standing agricultural practices among farmers in the northern and Mekong Delta regions in order to help locals increase productivity and product quality through organic farming.

Mayu is the driving force behind the Japanese non-profit Seed to Table, an organization she founded in 2009 to promote eco-friendly agriculture and support community development in the Southeast Asian country.

Her organization was awarded a grant of US$124,721 by the Japanese government in late February to carry out the first phase of a project designed to develop organic agriculture in Dong Thap Province in the Mekong Delta.

Mayu, who often goes by May, has never had any formal agriculture training.

Instead, she studied history in college, during which time she became so enamored with Vietnam that she used her savings to fund a trip to visit the Southeast Asian country.

After graduating from college in March 1997, she returned to Vietnam and took courses at the Center for Vietnam Research and Cultural Exchanges under the Vietnam National University - Hanoi.

Despite initial difficulties learning Vietnamese, she is now a fluent speaker with a northern accent, a skill which helps her blend in with the locals.

“Back then, Japanese non-profits wanted staff fluent in Vietnamese, so I was able to get a job,” she recalled, adding that most of the projects she was assigned to involved improving the livelihoods of rural residents and farmers in northern and north-central cities and provinces, including Son La, Hoa Binh, Hai Phong, and Nghe An.

When the organization she worked with stopped carrying out projects in Vietnam, Mayu was left to find her own cause to champion in the country.

“I took matters in my own hands and founded Seed To Table to continue providing aid to the farmers,” she explained.

Despite her lack of formal training, Mayu has long served as a mentor to dozens of Vietnamese farmers thanks to the vast network of business associates in the industry she has developed over the years.

Her first work in the sector involved aiding in animal husbandry projects that supplied farmers with quality breeding stock and technical training.

Those farmers, she said, were taught to make a living by raising livestock.

In return for the help, the farmers would give some of their livestock back to the programs to be passed on to other farming households.

Thanks to the programs, hundreds of low-income families now have stable, sustainable livelihoods.

Mayu then turned her attention to organic agriculture, launching her first project about ten years ago in Ben Tre, a Mekong Delta province where farmers had traditionally relied heavily on pesticides and growth stimulants for their vegetable and fruit crops.

Under the program, local residents were offered instructions and assistance in producing organic agricultural products.

They were also able to establish the participatory guarantee system, or PGS, defined by the Asian Development Bank as a community-based certification system that organizes farmers into groups and coordinates regular peer reviews or inspections of their members.

Mayu is a fixture on the fields in Ben Tre, helping farmers improve the soil and its productivity, select seeds, and tend to the crops with technology acquired from her partners.

At first, nearly 100 families were enrolled in the program, but that number soon dwindled as many were put off by its stringent policies, including making the switch from chemical-based pesticides to a garlic-and-chilly solution meant to keep pests off from destroying crops.

“The farmers had put in a lot of work,” Mayu explained, adding that several households secretly resumed the use of chemical pesticides, but were soon found out by their peers.

"Those who stuck with it were really dedicated,” she stressed.

The Japanese eventually connected with outlets and distributors to secure a stable market for the farmers’ organic produce.

That, coupled with the high demand for safe vegetables, has helped farmers double their profits.

“Clean agriculture is preferred by consumers so they are willing to pay higher prices. Organic farmers are also spared illnesses linked to the excessive use of chemicals. It is also better for the environment,” she explained.

"And the environment will be less polluted,” she said.

Since starting Seed to Table, Mayu has also extended her mission to include younger generations.

Through 'Vuon rau cua em' (My veggies garden), she teaches techniques on improving soil and tending to seedlings to students at 12 middle and high schools across Ben Tre who then use their techniques to harvest their own crops and sell them as part of a fundraiser for other charitable programs.

“The students talk to their parents about clean farming practices. If they choose to work in the agriculture sector later on, they’ll be much more likely to grow quality products with consumer health and environmental benefits in mind,” Mayu said.

A long way to go

“When I first visited rural areas in Vietnam, I was struck by the sheer poverty farmers endured. Their dependence on pesticides and growth substances resulted in low-quality products,” she shared.

“The situation and my affection for Vietnam over the past 20 years prompted me to take the initiative. I now consider Vietnam my second home.”

The Japanese woman expects her project to come to completion in early 2021, after which time she is not sure whether she will return to Japan or stay in Vietnam to continue her work in nearby Dong Thap Province.

The Dong Thap projects, she says, will focus primarily on helping farmers in the cities of Cao Lanh and Sa Dec.

Consul General of Japan in Ho Chi Minh City Kawaue Junichi confirmed the enthusiastic embrace the Ben Tre project has received from local authorities and farmers for its contributions over the past ten years.

“The next locality on the list, Dong Thap, will receive aid in food safety and farming, both of which Vietnam needs,” he underlined.