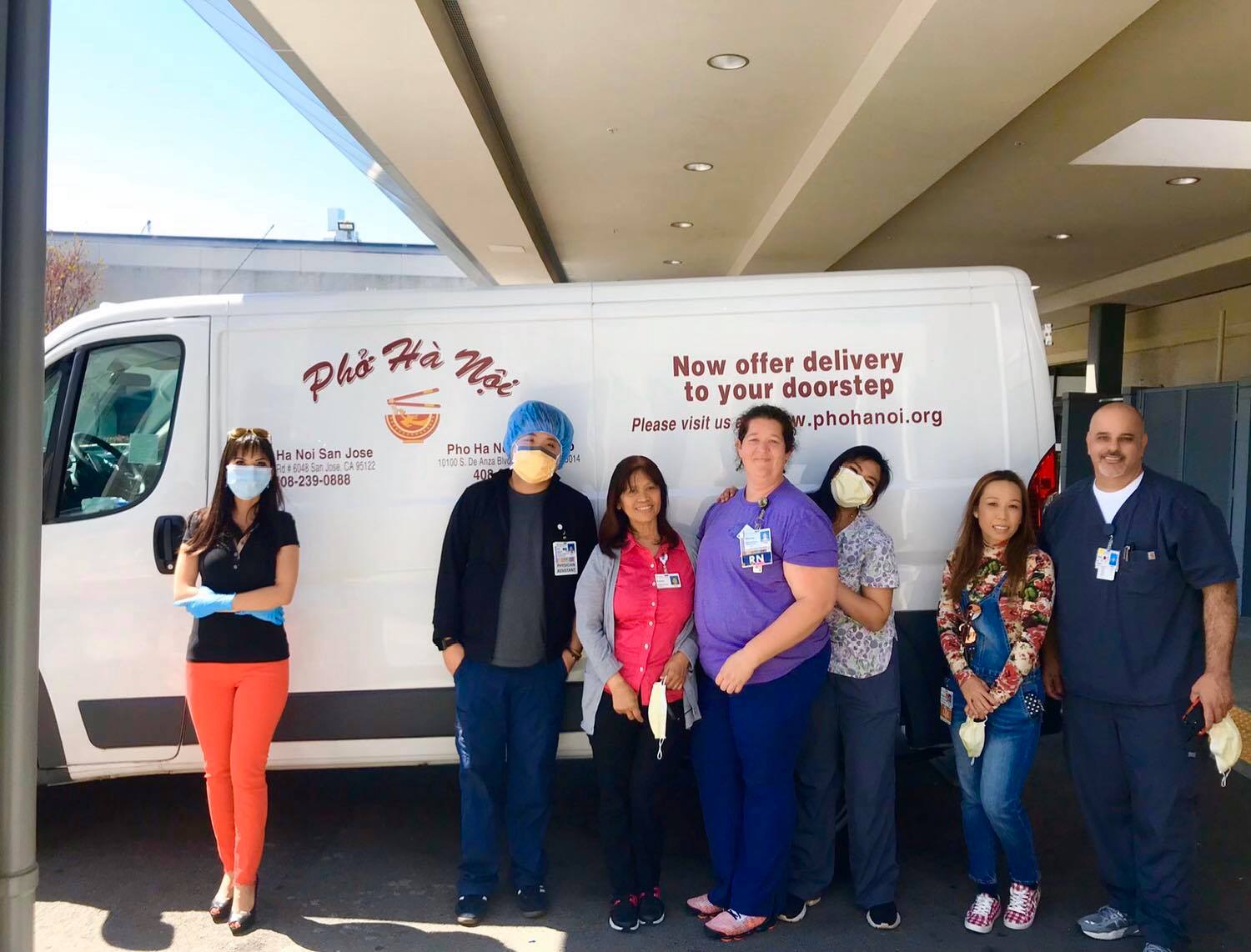 During a government-imposed lockdown to fight the novel coronavirus disease (COVID-19) pandemic, two Vietnamese Americans in California, the home of the biggest Vietnamese community in the United States, are finding themselves busier than ever, offering and delivering hot meals to frontline workers manning intensive care units and emergency departments at hospitals in the San Francisco Bay area.

Nguyen Thi Minh Huyen, 49, the owner of Pho Ha Noi, a well-known restaurant franchise with two locations in San Jose, California, originally got the idea to donate meals to doctors from a neighbor.

"I was asking myself, ‘You have great chefs and all the equipment, why don’t you do it?’” Nguyen said.

Nguyen herself has been feeling the pandemic’s economic squeeze – she’s had to cut her staff from approximately 65 to just 15 and her restaurants, which had been pushing out 3,000 meals per day just weeks earlier, are down to just 800 to-go meals a day which she offers at a 25 percent discount.

Still, she pushes forward, pumping out free meals for doctors and nurses, partly to show her appreciation to those on the frontlines and party to keep her kitchen staff employed.

Nguyen and her family had originally planned to take their annual trip to Vietnam to visit her mom’s grave and volunteer at local orphanages, cancer hospitals, and shelters from late March to early April, but the worldwide COVID-19 outbreak put an end to those plans.

This year, they’ve redirected the money for their trip towards supporting medical staff on the frontlines in California, a cause she holds close to her heart thanks to the support many of those same medical workers gave her when her own infant daughter was diagnosed with cancer.

With this money, and support from Phan Tieu Van, a fellow Vietnamese American living in San Jose, the two have been able to deliver hot meals to different hospitals in the San Francisco Bay area.

At the start, they had planned on donating 1,000 meals with a maximum of 100 meals per day, but thanks to her friends and family for donating to their cause, Nguyen’s landlord reducing rent, her suppliers donating free ingredients, and her staff taking minimal payments for gas, the duo has been able to donate 2,000 meals and hope to reach 3,000 in the coming days.

"When we started our community support, I found that it was easier to find donors than to actually donate meals to the hospitals,” Phan recalled.

Owing to government regulations, the donated meals must be prepared in a licensed restaurant and delivered by the restaurant’s food truck.

They operate four days a week, Monday, Tuesday, Thursday and Friday; and on Wednesday the restaurant closes for a deep-cleaning.

Phan usually arrives at Pho Ha Noi in the early morning and helps with errands before acting as the ‘navigator’ for the food truck driver who delivers the meals to the hospital each day.

At many hospitals in California, the canteen areas have been renovated into makeshift hospital rooms to treat COVID-19 patients in case the number of admitted cases increases.

Because of this, medical staff have to bring their own meals or order delivery, which can often take more than ten minutes from their 30-minute lunch break.

Phan said she spends a lot of time on the phone arranging drop-offs and getting approval to use the emergency entrance at each hospital so that doctors and nurses are able to get their meals within minutes, rather than trekking all the way into the parking lot.

Thanks to their efforts, during breaks from exhausting shifts, healthcare workers have been enjoying tamarind prawns, roasted chicken rice, spring rolls, and grilled pork. There are also vegetarian and vegan options available.

"There was a moment when my body felt like it needed a break, but I was too overwhelmed with happiness. The smiles I get inspire me to continue my work with Nguyen," Phan recalled.

Phan said she has received many emails and text messages, some coming around midnight when the hospital staff were off work.

Besides offering a big thanks to Nguyen and Phan, many said they are impressed with Vietnamese food and cannot wait to visit Pho Ha Noi when things go back to normal.

"I have plans to get together and share a hot pot with many doctors and nurses who I now know from delivering food to them," she said.

"When the pandemic is over, we will sit down to talk about an unforgettable chapter of when the virus brought us together."