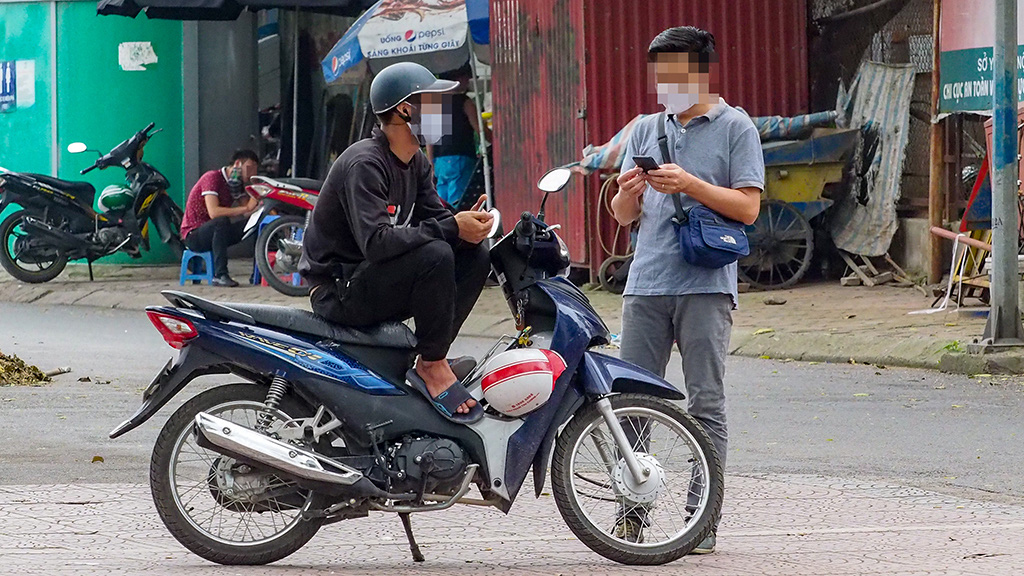 A young Vietnamese man lost his motorbike after a drinking spree. He rushed to a detective agency, hoping the bike could be retrieved without the knowledge of his parents. The bike was eventually brought back by the thief himself.

The client was Long, a 26-year-old man whose parents entrusted him with managing a large-scale firm in the northern province of Quang Ninh, specializing in construction machinery.

As the third child and only son in a family reigned by an authoritarian father, he dared not to let the cat out of the bag concerning his reckless act.

From what he told the detective, the suspect was a male acquaintance he had just met the night before at a disco bar.

Long racked his brain trying to recall his name, but it was in vain. They were having a drink together because Long was intrigued by this man’s singing.

Two bottles of vodka later, the two wasted men found themselves in a hotel room near Ho Tay (West Lake) in Hanoi.

“I’m not gay or anything. We were just too drunk, so we came there to sleep,” the client said.

When Long was checking out the next morning, he realized his bike key was gone, but all his personal belongings were still there.

All of a sudden he remembered checking in to the place with a male bloke, who had vanished into thin air together with Long’s motorbike.

He tried to keep his family in the dark for fear his father would hit the roof to find out how irresponsible he was to neglect his business.

Normally, Long would have a chauffeur drive him around on business and pleasure trips, but on the day of the incident he suddenly felt like riding the bike for a change.

Detective Thinh agreed to take on the case, but with so few clues to start with, it already seemed like he was in for a rather daunting mission.

His team first approached the hotel for CCTV footage, but the video quality was too low to be of any use.

Thinh assigned other investigators to have a check through a used bike trading hub in Dich Vong Ward in the capital city’s Cau Giay District and all used bike stores in their contacts.

What the detectives were looking for was an unmodified 1991 brownish Honda Astrea.

According to Thinh, the motorbike was a rare breed imported from Indonesia and could only be afforded by really rich people.

He claimed that should it appear anywhere on the market, someone would snatch it immediately.

Some detectives accessed bike trading groups on social networks, posting that they need to buy a bike with such specs.

However, a week passed without any trace of the two-wheeled vehicle. Most of the Astrea motorbikes for sale were produced more recently and thus paled in comparison to Long’s lost bike in terms of both quality and value.

The detectives narrowed down to three hypotheses: The bike had already been disassembled for parts, its identification details had been tampered with, or it had changed hands without any accompanying papers.

Should any of these be the case, finding the bike would basically be ‘mission impossible’.

Thinh got back to the bar for more leads on the suspect. He learned that this man had been to the venue a few times and had a high-pitched and captivating singing voice.

According to the bar’s manager, he could perform both old and new Vietnamese pop songs, with a fine projection of emotion. Clearly he had a background in vocal training, the detective asserted.

Therefore, the investigators zeroed in on those graduating from any music-related major in Hanoi between 2002 and 2004.

One week of searching yielded a suspicious undergraduate student of Vietnam National Academy of Music who had not gained enough credits for graduation.

After gathering some personal information on the suspect, Thinh himself took a trip to Me Tri Ward in Nam Tu Liem District. His name turned out to be Binh, a notorious drunkard in his neighborhood.

Binh’s mother said her son had not been home for two weeks, so Thinh asked her for his phone number, pretending that he wanted to sign Binh as a singer for his new coffee bar.

But the number was out of service. His mother informed Thinh that the man had been to Da Nang City in central Vietnam a few days prior.

The ‘thief’ comes back for his victim

Narrowing down possible locations in Da Nang, Thinh came all the way to a restaurant owned by one of Binh’s classmates.

This person said that Binh had been there for a week and had accidentally damaged his phone after taking a dip in the ocean while drunk.

According to him, Binh had come to Da Nang by train and had taken a train back to Hanoi.

There was no sign of the bike, so Thinh headed back to his Hanoi’s headquarters, only to be shocked to be told that Binh had come back to the bar to find Long.

From Binh’s account, he could not remember Long’s name either, but he needed to find the man to return the bike.

Binh claimed he did not mean to steal the bike and that it was simply a drunken act done without much thought.

It happened that his friend, the Da Nang restaurant owner, had phoned Binh on the evening of the ‘theft’, telling him to go to the central city for some friendly gathering.

The drunk man took his newly acquainted hotel roommate’s bike and headed for Hanoi’s train station. He had the bike ride as cargo to Da Nang, boarded the train, and completely forgot about the vehicle.

Upon his arrival in Da Nang, he was so warmly welcomed by his buddy that it escaped him how he had gotten to the train station in the first place.

After a week of partying, he returned to Hanoi by train. Once he was standing on the platform, he recalled the incident from one week before.

He could not retrieve the bike as he did not have its legal documents, so he got to the bar hoping to find the bike’s rightful owner.