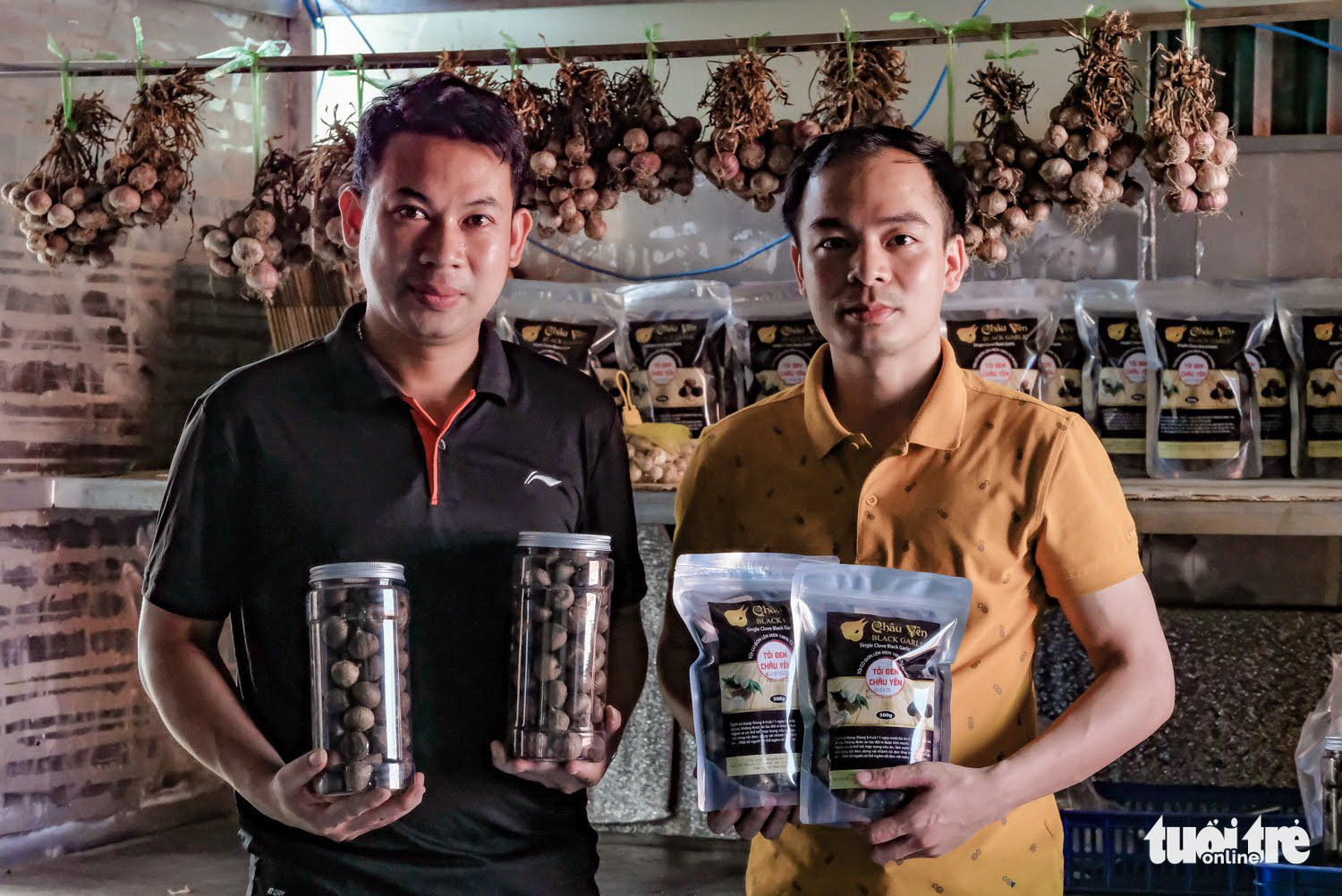 Two young entrepreneurs started a black garlic manufacturing business with just a rice cooker hoping to make some extra cash. They never expected their operation to balloon into 11 industrial fermentation machines that would help them rake in VND2.4 billion (US$103,500) in monthly revenue.

Son La Province’s Yen Chau Town is constantly blanketed by the soft scent of garlic lingering in the air.

To find out where the smell originates, visitors need only follow their nose to a manufacturing workshop operated by Nguyen Van Toan and Nguyen Anh Duc, aged 30 and 33, respectively, the two entrepreneurs credited with transforming the region into Vietnam’s black garlic hub.

From rice cookers to industrial machinery

Toan was a new university graduate when he returned to his hometown in the northern province of Son La looking for work.

When he noticed Japanese importers scouring the area for black garlic – a fermented form of garlic – and willing to pay VND1.5-2 million ($64-86) per kilogram, he knew he had to get in on the action.

His first step was to enlist Duc, a teacher at the time, to serve as his right-hand man. The duo then began experimenting with different fermentation processes using online tutorials and a rice cooker.

Duc and Toan offered taste tests of their first two batches to friends and tweaked their recipe based on the feedback.

They then went on to soft-launch their product by distributing 15 kilograms to coworkers, earning them VND9 million ($385) in revenue.

“The two of us started from scratch. We used up our salaries to buy ingredients the moment we got paid and were utilizing the lunch breaks at our day jobs to work on the project. We also gave up our evenings for years so that we could produce black garlic,” Duc said.

As a form of quality control, Duc and Toan spent a good chunk of money purchasing black garlic from other producers in order to compare it to their own and better understand the market.

“We used [those products] to understand where we were quality-wise. At points we event spent VND1.5-2 million [$65-86] on just one kilogram so that we could compare it with ours,” Duc said.

Though Toan and Duc eventually perfected their fermentation process, they found themselves struggling with production issues, namely their inability to push out enough products to meet rising demand.

They eventually found themselves with a choice. They could continue working a low capacity for low revenues or they could drop a whopping VND500 million ($21,580) on a machine that would allow them to ferment one metric ton of garlic in a single batch.

As neither option seemed reasonable, the duo got to work on designing their own fermentation machine despite a lack of mechanical know-how between them.

Unsurprisingly, their first prototype was not quite a success.

“Some batches turned out great and some did not. They canceled each other out,” Toan said.

After much trial and error, they eventually fine-tuned their design and began churning out consistently solid products.

Their adjustments eventually led to them invited to sign up the machine, named CY-01, for Son La Province’s 2018 Young Technical Innovation Competition.

From their humble start with a rice cooker, the two entrepreneurs-mechanics have now built a total of 11 industrial-scale fermentation machines, each capable of turning 1.5 metric tons of fermented garlic per production cycle.

In their manufacturing workshop, tons of fresh garlic is dehydrated twice over, sending the spice’s scent wafting through the air of Yen Chau Town.

Working the batch of garlic in the workshop are female workers of the local Thai ethnic minority in Son La, their hands well-versed in handling the fermenting machines.

After preliminary processing and cleaning, the garlic is laid on trays and placed in the machines.

During the fermentation process, temperature within the machines fluctuates between 70 and 90 degrees Celsius based on each fermentation phase.

Fresh garlic needs to be subjected through two dehydration and fermentation processes – all within one month – to reach its final black garlic form.

Quang Thi Mai, a 50-year-old Thai worker at the facility, shared that she earns VND3.6 million ($155) per month operating the machines and packaging garlic in this workshop.

“I did farming for a living before I worked here. I’m used to strenuous work, but working here is better because I’m out of the hot weather,” Mai said.

Yen Chau black garlic, considered one of the highest quality black garlic varieties around, has built up a fine reputation amongst connoisseurs.

The two entrepreneurs are working to develop their customer base in nearby places through a series of promotion activities.

“We tell each other: ‘We have to go further’,” Duc shared. “Starting in Moc Chau, we carried black garlic on motorbikes to different boutiques asking them to display our product on consignment contracts.”

“During our visit two months later, the boutique owners were excited to sign with us because they saw potential in our product."

In 2016 during the boom of e-commerce in Vietnam, the pair began distributing their product on cyber platforms, including Shopee and Lazada.

Toan and Duc are also branching out into new ventures. They have so far signed processing contracts with business partners from southern provinces.

Using ingredients supplied by the partners, they are able to handle manufacturing and can resell the finalized products back to the supplier.

With help from the local farmer’s association in 2016, the duo was able to showcase their products in trade fairs all over Vietnam.

They have opened a subsidiary to separate their administrative operations from their manufacturing.

“The key to a successful business is passion and smart product segmentation that can meet market demand. A product that the market doesn’t need is sure to fail,” Toan said.