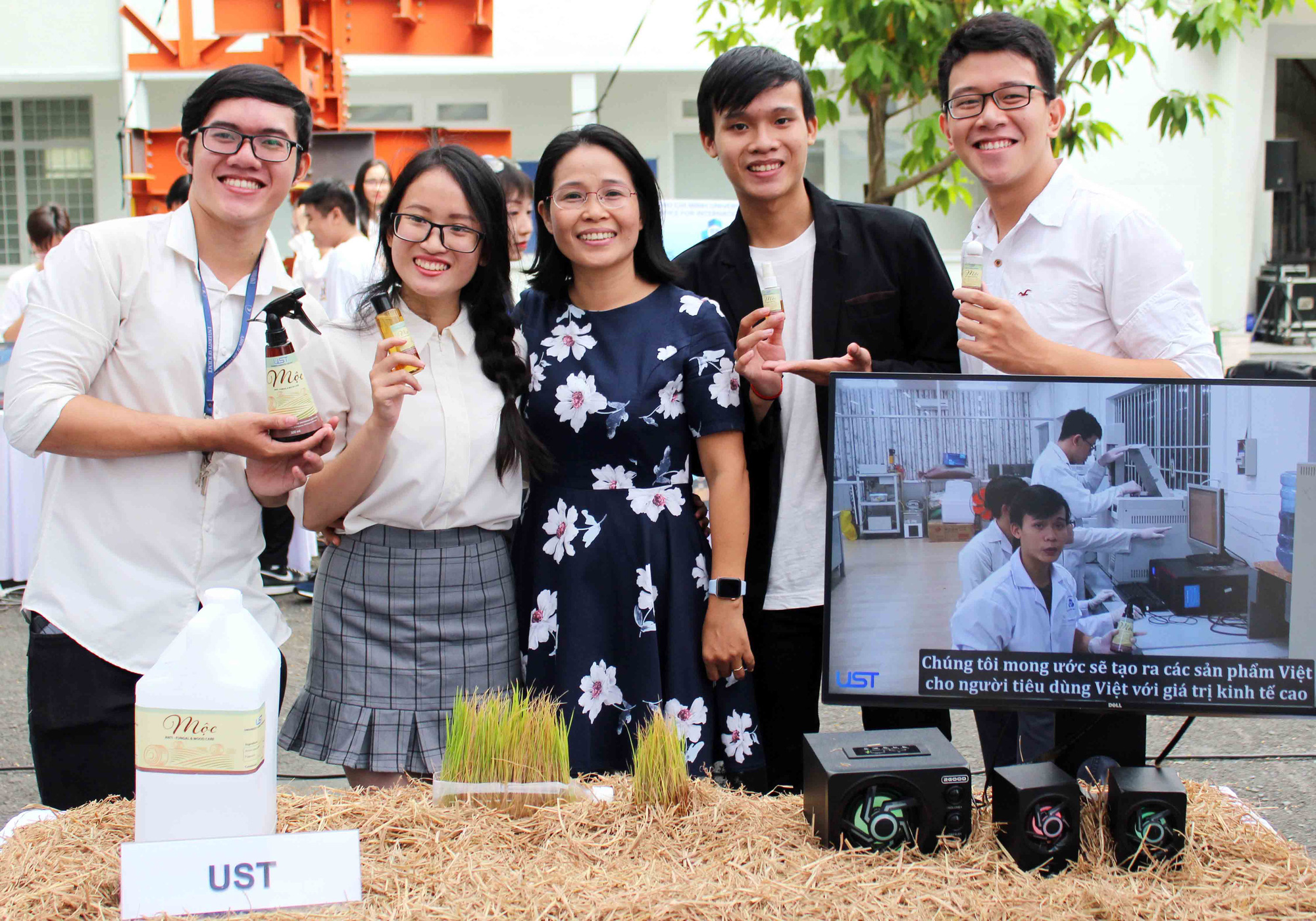 The students who all specialize in chemistry became friends after taking a short course on flavoring preparations together.

They aim to seek answers to their research interests.

Locals in the mountainous provinces of northwestern Vietnam have the habit of hanging buffalo meat above their cooking area as a way of preserving it.

It was a question that kept bugging Chi: “How can a piece of buffalo meat be left out in the open for a long time without going bad?”

Convinced that kitchen smoke was key to helping the meat last longer than usual, she started looking for substances in the smoke that could explain the preservation method.

She brought up the issue to Associate Professor Le Thi Kim Phung, a lecturer in the faculty of chemical engineering at the Ho Chi Minh City University of Technology.

The answer to the issue instantly became the theme of research for her team, who spent a great deal of time in the school’s laboratory working on their project.

Chi said they are fortunate to receive enthusiastic support from teachers.

“[Otherwise,] poor students like us could not afford to buy materials and rent labs,” she says.

Meanwhile, Khang said everyone in the group had to stay focused on their schoolwork and projects, and they were only able to work with each other after school since they are from two different universities.

“We wouldn't leave the lab until 9:00 pm almost every day,” Khang said, adding that if they were allowed to stay overnight, they would likely have done so.

In the early days, each member was assigned to read certain research and studies, most of them are in foreign languages.

The students gradually realized that they could use agricultural residues that are abundant in Vietnam such as rice straws, rice husks, sugarcane bagasse, and coffee grounds for their research.

The agricultural products can also be used to make biological oil, which plays a key role in the group’s research.

The students employ this type of biological oil to extract and separate compounds of natural origin from agricultural residues through separation processes, such as sedimentation, filtration, centrifugation, and the use of green solvents.

When diluted to appropriate levels, the compounds become products with antifungal, mold and stain resistance properties on cellulose-based materials, such as wood products.

The students have tested their new products out in a laboratory setting, and on a wooden surface in a natural environment. The result reveals that their antifungal and mold resistance has reached more than 90 percent.

Duc told Tuoi Tre (Youth) newspaper that they will take the research further even though they have already conducted multiple tests at different levels of dilution.

He explained the solution can be mixed with essential oils to create a wide variety of odors, but there remains a typical smell of smoke that not everyone will like. Also, the color needs improvements to satisfy esthetic requirements.

The students have found similar foreign products which are made from chemicals, not organic materials, so they feel quite confident about their initial results.

Natural oil extracts can be mixed into wood pulp during the wood production process. As a result, finished products will have the ability to maintain mold and stain resistance.

“Low-value oil can be used to create higher-value products. The remaining amount of solid waste after the gasification process can be even used to improve agricultural land,” Chi said.

“We will make further research, test, and improve the products so that they will be introduced to the market as soon as possible."

Associate Professor Phung, who instructs the group of students, said their initial results are promising as they are just second- and third-year students.

The products are made from completely natural materials and are without any chemicals, the instructor underlined.

A few more steps are, however, needed to enhance the products which are poised to be commercially viable, she added.

The students won second prize for their antifungal and mold-resistant products at an innovation contest at the Ho Chi Minh City University of Technology this year.