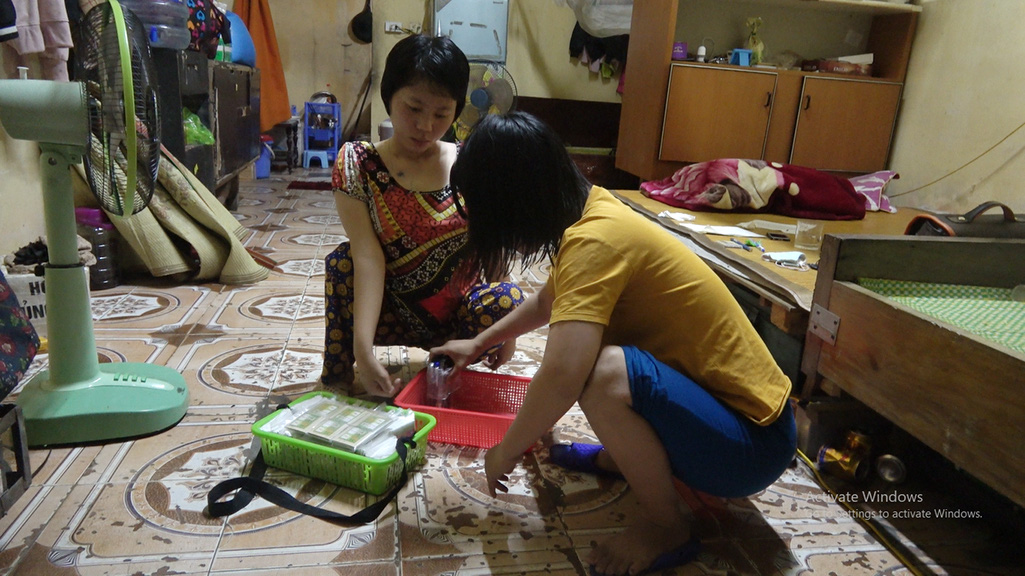 Physically challenged people from northern and central localities share cheap rented studios in Hai Phong City, approximately 120 kilometers from Hanoi, for a chance to nurture their special bond and seek a source of strength to triumph over adversity in affordable accommodations.

Many people with disabilities, including ones with severe mobility and speech impairments, leave their hometowns to earn a living as vendors and street singers in Hai Phong.

Every few months, they would move to other provinces before returning to Hai Phong for a change of ‘workplace’ and more opportunities.

Starting as complete strangers, they quickly become close friends and share rented rooms to cut costs and support one another.

Some even find a wife or a husband this way and end up starting a family.

In an alley snuggled in Cau Tre Ward, Ngo Quyen District in Hai Phong, Nguyen Quoc Son lives with his wife, Le Thi Nhan, who hails from Bac Ninh Province, about 109 kilometers away.

Nhan, 37, lost her ability to walk and the use of her hands due to muscular dystrophy, a group of inherited, degenerative, genetic conditions that gradually cause the muscles to weaken.

Her conditions make it difficult to do many everyday tasks without assistance, such as getting in and out of bed.

The couple moves around and peddles their wares on a modified tricycle.

Nhan’s roommate, Tam, who fares just slightly better, usually helps her with food shopping, cooking and moving around the room.

Tam, 30, who came all the way from the north-central province of Nghe An along with her boyfriend named Thanh, broke her arm in an accident and was diagnosed with mild mental retardation and dementia.

Thanh himself has developed atrophy in one arm and leg following an accident.

Xo, also from Nghe An, had their feet burned as a baby due to their mother’s negligence. Xo was dealt another devastating blow when an accident later left their jaw clenched, resulting in speech impairment.

Xo’s neighbor, Tuc, from northern Lao Cai Province, also struggles to put food on the table due to his visual impairment.

Hiep, who was struck with congenital partial paralysis and jaw abnormality, leaving her with difficulty speaking, was hurt in a recent fall.

Her neighbor, Tran Manh Tuan, from northern Phu Tho Province, constantly offers help despite his own paralysis in one arm and leg from a childhood fever.

“Each of us has our own sad story. We got to know one another through mutual friends, social media, or peddling work and came to share the rooms,” Nhan said.

“We’re really supportive and helpful like a big family and everyone here receives positive vibes. We’re all alike, so we just pour out our hearts and share difficulties without any hesitation."

Inflicted with the most severe disability, Nhan receives the most help from her neighbors. She is also ‘elected’ head of the neighborhood thanks to her conversational gift.

Despite their impairments and overwhelming hardships, most of them are eager to experience life and carve out a self-sufficient living for themselves.

When faced with adversity, they are never tempted to give up.

“Unable to do heavy work, we resign ourselves to mostly peddling and street singing, happy to be on the move for another day, making a buck here and there. People buy our wares mostly out of compassion and some even give us money,” Tam said.

“We feel low-spirited from time to time as we find ourselves on the receiving end of condescending stares on the streets from those who think we are feigning."

Around 6:00 am in the summer, the group members, individually or in pairs, with a physically stronger member supporting a weaker one, tramp to densely populated residential areas, stand at traffic light posts or move around markets to sell their wares.

“I burst into tears during my first days because of insults from passers-by who thought I was pretending to prey on their compassion. Many, though, were more sympathetic and supportive,” Hiep said with difficulty, her words hardly intelligible without Tuan acting as an ‘interpreter.’

Amid all the daily hardship and humiliation, the members find their life struggle less daunting with their newfound friendship and even romantic love.

“This is a ‘full house’ which we built ourselves,” Nhan proudly said, pointing to a painting made from recycled cans depicting a house.

Most of the group members were born to disabled parents or grew up poor.

Three out of four members in Nhan’s family end up with physical disabilities, while her husband was born to a physically impaired woman who begged for food her entire life. Hiep lost both of her parents as a child.

Nhan and her younger brother’s muscular dystrophy was inherited from their father since she was only 12 and their condition has kept worsening since.

After their father passed away more than 10 years ago, their family was plunged into financial difficulty, with their mother being the sole breadwinner.

Desperate to support her mother, Nhan planned to take up portrait painting and tap into her artistic gift passed on from her father, but her dream was shattered as her hands began to lose strength and shrink.

Nhan recently followed a friend to Hai Phong to make a living and unexpectedly met Son, a man without a home and even identification papers.

They soon tied the knot and now have a healthy four-year-old daughter, whom Nhan’s mother was tending to.

“I’ve realized a new ‘me’ since I began venturing out to earn my own living. I’ve changed completely from a withdrawn woman with an inferiority complex to an outspoken woman,” Nhan noted, adding marriage and motherhood are beyond her wildest dreams.

The group stays in Hai Phong for around two months and head to other localities including Bac Giang, Hung Yen, Phu Tho, Nam Dinh, Thanh Hoa, and Nghe An for new opportunities to sell their wares before finally returning to the departure city.

During the journey, some old members may find their own paths while new ones join.

“Over the past several years, I have only let my rooms to the physically challenged and have never demanded a rent rise. If they cannot afford the monthly rent, they can pay it by the day, for a mere VND20,000 [US$0.8] per day,” Nguyen Thi Ren, owner of the rooms for rent, said, adding her young tenants are all well-behaved.