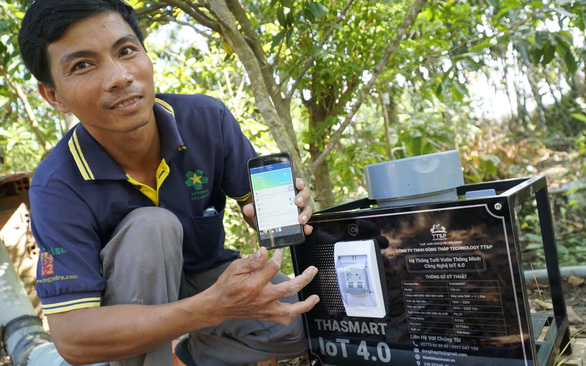 THASMART, a comprehensive irrigation solution, was born out of Thang’s urge to lessen the burden for farmers in his hometown.

It incorporates as much as 19 functions, which seek to answer all the demands and peculiar circumstances of local farming.

On top of irrigation, the system is also equipped with weather forecast optimization, intruder surveillance, system malfunction alerts and saltwater intrusion warning, among others.

Ngo Hung Thang, a 43-year-old tradesman and technician living in Tan My Commune of the Mekong Delta province of Dong Thap, started his career of selling electrical and telecommunications appliances in his hometown after dropping out of school.

His business soon gained traction, earning him billions of dong. (VND1 billion = US$43,410).

Yet, all it took was a miscalculated business choice for his work to go to waste. Thang’s business went bankrupt, which forced him to sell his houses and remaining assets to pay debts.

This was the point Thang realized that he had been too complacent.

“I say thanks to these failures. Had I been met with nothing but success, I would have not had the chance to reflect on myself, but rather just kept on walking the well-trodden paths of others, forgetting about my true passion,” Thang said.

He started picking himself up by taking on a multitude of jobs - from selling spices and seafood to cargo delivery.

During that time, he faced harassment from his creditors, who vandalized his house with paint and hurled insults at him in public.

However, they eventually backed down and agreed to extend his payment deadline after seeing the honest work he put in every day.

As Thang was on the cusp of financial recovery, he was struck with woes once again when his mother fell critically ill.

Seeing his mother’s condition worsening due to her degenerative spine condition, Thang came up with an idea of a wheelchair-stretcher fusion and jumped right into execution.

His electrical background helped him to quickly devise the mechanism of the vehicle, but he had to brush up on a sizable amount of mechanical knowledge along the way.

To the surprise of many, Thang eventually delivered the final product, which helped his mother get discharged from the hospital and continue to live independently.

The success of his first craft also served as the motivation for Thang to pursue another creative venture.

With his vision set on an automated irrigation system, Thang took design inspiration from the real-life scenarios of local farmers he interviewed while designing his product. The result is niche, highly-optimized products that cater to local demands.

“Back when I started inventing, I used my father’s garden as the testing ground. I installed an irrigation system with sprinkler heads that feed water directly into the roots of the trees. However, I would stumble upon them and break them all the time,” Thang recalled.

“My solution was recessed sprinkler heads. After use, they hide underground and avoid damages,” Thang proudly explained.

Automation at an affordable price

After the failure at his first business, Thang found himself reflecting his true passion all while scrambling for a living.

“Back in my childhood days, I used to water the garden. I remember looking to the sky and dreaming about a fully automated irrigation system. That is why I decided to try my hand at creating one now,” Thang talked about his inspiration for creating THASMART.

It is envisioned as a system which can take on all kind of watering duties for farmers.

The creation of THASMART was no walk in the park for him – the product had to undergo a myriad of unsuccessful prototypes before reaching its current form.

As he can only work on the hardware, Thang outsourced software development to various contractors. Due to his lack of understanding in the software department, many of the early commissions that he received turned out to be completely unusable.

“I can’t recount how many circuit boards I have thrown into the trash,” Thang said.

After years of arduous research, his first complete blueprint SmartViet HT-8917 – name after the launch date September 8, 2017 – was introduced.

With Internet of Things (IoT) features incorporated, Thang’s creation is able to report all irrigation-related details to the owner’s smartphone. In fact, the whole system can be operated through a smartphone, making remote watering possible with just a few taps on the screen.

For instance, the saltwater intrusion feature will instantly report to farmers upon any detection of saltwater in the irrigation system for farmers in the delta.

Thanh’s product can also automatically water the tops of trees to prevent harmful hoarfrost from ruining their flowers in colder climates. This way, the farmers won’t have to stay up all night to watch out for the adverse weather effect.

Nguyen Thanh Tong, a farmer with a 1-hectare jackfruit garden in Dong Thap Province, said the “4.0 technology” has been of great help to him.

“I assigned all my irrigation work to the system. Farmers can be inexact about the water amount, but the system is always precise. It takes humidity, rain and other factors into account before deciding to water or not. My fields are greener and healthier than before, while loss of fertilizer is also minimized,” Tong said.

Nguyen Hong Thanh, a farmer at Chau Thanh District of Dong Thap Province, one of the earliest THASMART adopter, voiced his trust in the system’s creator.

“Thang is passionate and very keen on learning. He always asks for feedbacks from us farmers to update the program. The system updates from him are always free,” he remarked.

“You have to be very devoted and passionate to be able to pursue an endeavor like him.”

THASMART IoT 4.0 have been sought after by farmers in Mekong Delte provinces as of Dong Thap, Can Tho, Ca Mau, Vinh Long, and Ho Chi Minh City.

The system has also been deployed by the authorities of Dong Thap Province to support farmers in a digital transformation and smart village initiative.

Thang has been invited to introduce his work at a digital transformation conference by Dong Thap’s Department of Information and Communications, where he received a certificate of merit for his inspiring achievement in tech startup.