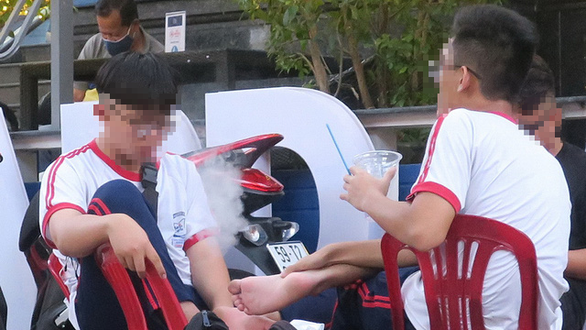 “There are no tastes I’ve never tried. Among all, chocolate flavor is the best,” he told Tuoi Tre (Youth) newspaper after taking a long drag then exhaling slowly.

E-liquid is diverse in flavors, from strawberry to orange, mango which contains nicotine and cannabis.

“I tried this in my eighth grade”

On a winter day in the southern metropolis, smoke billowed an air-conditioned coffee shop on Nguyen Thai Binh Street in Tan Binh District where a group of schoolboys in their uniforms gathered for vaping.

“Your eyes must feel stinging. This place is exclusive for vapers like us,” one of those schoolboys told Tuoi Tre’s reporter.

Exhaling chillingly while spinning an e-cigarette around his fingers, T.K. said he started using vapes at eighth grade.

“I tried for fun and felt quite dope at the first time. Now I get addicted to it and become the best smoker of my group,” he said proudly.

At school, they smoke in toilets yet as teachers start inspecting, these schoolboys have to gather at cafes for vaping.

T.K. opened his vape and added some drops of oil.

“There are no tastes I’ve never tried. Among all, chocolatey flavor is the best,” K. told Tuoi Tre after taking a long drag then exhaling slowly.

He has tried almost all kinds of vapes available and traded them if no longer interested.

“I cannot stick with a vape kit for so long. I am urged to upgrade. There was a time I pledged my motorbike for VND10 million ($433) to buy this vape,” K. added.

H.T.H, an 11th grader, said he knew all about e-cigarettes’ harms.

“We buy them online, from sites certified by vaping communities which sell quality products. Is there any cigarette that not harmful? But we are young then it is going to be fine,” said H.

It is not a strange scene to witness students smoke vapes in front of high schools in Ho Chi Minh City’s District 3.

V.T.H, a 12th grader, left his school on a customized Honda motorbike, riding two other friends. Stopping by a street café, H took out a pen-like vape, having a long drag.

“Half of my classmates are vapers including girls. No matter how hard teachers try to uncover us, we manage to sneak smoking anyway,” H. laughed, showing stained teeth.

“My friends used to share me theirs. As I got addicted to it, I decided to buy my own. As my vape is small, I can bring it to school and even put on my desk without having my teachers suspect,” he said.

“Boys like vapes shaped like ball pens or highlighters. For girls, they prefer those looked like lipsticks. Flavors are diverse, mostly fruity. I like grapefruit taste the most as it is fresh,” he added.

Pointing to schoolboys smoking cigarettes at a coconut juice stall nearby, H. said they started with vapes.

“As they got more addicted and could not afford expensive e-liquid, they switched to tobacco,” he said.

“In case of giving up on e-cigarettes, I will take tobacco too as I will feel a void without smoking,” said H.

Tran Quoc Toan Street in District 3 is well-known for vape shops among students. An owner of a shop opposite Tran Quang Dieu High School showed Tuoi Tre’s reporter two types of pen-like vaping kits, priced VND120,000 and 130,000 ($5.62) each, advertising that they were popular among students.

“We don’t sell e-liquid,” he said, adding the prices remained unchanged for bulk purchasing due to huge demands.

Students’ usage of e-cigarettes is an emerging issue, according to Nguyen Nho Huy, deputy head of the Department of Physical Education under Ministry of Education and Training.

The Vietnam Tobacco Control Fund is developing regulations regarding e-cigarettes for the Government. Meanwhile, the ministry is expected to enforce mechanisms to prevent students from using vapes.

The Ho Chi Minh Communist Youth Union of Tran Phu High School in central city of Da Nang has warned against the “invasion” of vapes to schools under forms of lipsticks, tumblers, lighters or pens on its official fanpage.

E-cigarettes are harmful, firstly because of addictive nicotine. Vape smokers may switch to tobacco later.

Secondly, e-liquid contains nicotine and other chemicals which causes cancer and other additive ingredients of cocaine and marijuana – leading to both smoking and cannabis addiction. Young people and students may reluctant to pay attention to these threats.

E-cigarette poses the same threats as tobacco, including cancer and bronchitis. Meanwhile, it is advertised as trendy, thus easily luring young people to use.

Students in puberty are more vulnerable to e-cigarette’s harms compared to adults.