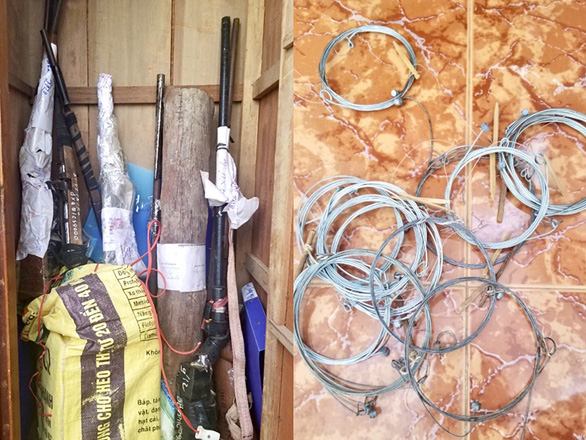 When a behemoth gaur, also known as an Indian Bison, was found caught in a trap, Cat Tien forest rangers immediately went into action and drew up a plan to rescue the animal.

It was one of the most memorable experiences for forest rangers working at Cat Tien National Park in Dong Nai Province, located in southern Vietnam, according to Huynh Van Trung, deputy head of the forest ranger unit, who directly commanded the rescue.

Five years ago, Trung got an urgent call from his colleagues.

“We’ve found a trapped gaur. It’s too ferocious, and we cannot approach it,” his colleagues told him from the scene.

The gaur is a large wild cattle species that is native to Southeast Asia. They are currently considered a vulnerable species, having gone extinct in Sri Lanka already.

Trung coordinated with other rangers to come with him, 5km from the office. Before leaving, he brought along water, an anesthesia syringe and some tools to deconstruct the trap.

However, these supplies proved incapable of helping the trapped animal.

“The gaur was too big and violent," he recounted.

"It weighed nearly a metric ton.

"We had to stand 30 meters away while trying to find another solution, worrying it might attack us.”

They decided to administer the anesthetic and give water to the gaur to make the trapped animal more comfortable while waiting for support from Dong Nai Province’s Forest Ranger Department.

Suddenly, the gaur jerked off the cable tied around its limbs.

Seeing the animal escape, the rangers ran and climbed up nearby trees. The gaur howled furiously and ran around. Seeing no one, it ran into the woods.

"Luckily, no one got hurt."

Trung said the forest ranger force at Cat Tien National Park was in charge of managing and protecting the woods as well as preventing loggers from chopping trees and hunting wild animals.

Rescuing trapped animals becomes an inevitable part of their job.

Because of their remote location, there is usually no cellphone service and it takes a long time for rescue teams to arrive.

While rescuers are on their way, rangers will have to provide first aid to wounded animals.

It is simple to deal with deer, pangolins, birds or other 'gentle' animals since even in panic, they are not likely to hurt humans, according to Trung.

“For those dangerous ones, gaurs or boars in particular, they always fight back as a kind of self-protection mechanism," he said.

"Once free from the trap, they immediately attack us.

"For wounded cobras, how dare we take care of them?”

The forest ranger said giving wild animals treatment and rehabilitation before releasing them back into the wild is not simple.

They are not equipped with anesthesia guns and bellows, whereas syringes often do not work with thick-skinned, furious animals.

Any animal has its own safe distance, it might run or otherwise, attack humans for self-defense, according to Trung.

He said with an attempt to escape, trapped animals always hurt themselves, causing serious wounds.

“Once they defend, forest rangers will be in danger,” he said.

“Those who set traps only think of how to catch the animals alive to sell them at higher prices.

"We have seized several types of hand-made traps and guns ever since.

“Those [animals] which were lucky could be rescued overnight.

"Most of them are small animals."

He expressed the hope to be equipped with proper tools to save wild animals.

“In the best scenario, we can stand up to 40 meters away from the animal while giving it an anesthetic dose,” Trung explained.

“Vets then will be able to feed it and provide first aid before transferring it to Dong Nai Province or Ho Chi Minh City for examination, based on its conditions.”

Nguyen The Viet, deputy director of Cat Tien National Park Center for Rescue and Conservation of Species, said they receive some 200 animals of 20 species each year.

“One-third of them are saved by forest rangers. The rest are handed over by local residents or other centers,” he said.

On the post-rescue process, Viet said they have to check on the animals’ health conditions, whether they are saved in the woods or from cages before prescribing treatments.

When fully recovering, such animals will be brought to a larger cage surrounded by the forest to get used to the new environment and learn to find food.

Before being released, any animal will be checked and monitored in 21 days to make sure it does not have any infectious disease that can spread to healthy peers in the woods.

Areas for release are decided based upon the distribution of species.

More than two decades working in the field, Viet said they have had to face two main challenges, a limited budget and lack of experts.

Expenses for rescuing wild animals are enormous, from the construction of cages to transportation and treatments.

Besides all that, it also requires the vets to take care of the animals to have extensive expertise.

The center was established in 2015 with 30 workers.