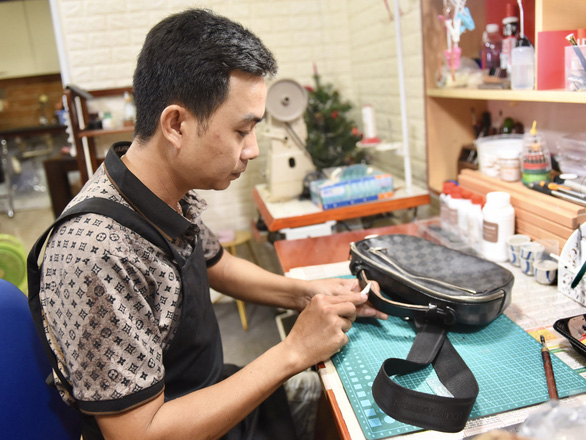 Although it might sound exciting to work with designer goods, the craftsmen who restore and repair luxury items face a difficult balance.

Designer bags, shoes, and backpacks are customers’ means of showing their social status in Vietnam.

However, how can these assets which might cost hundreds of millions, even billions of Vietnamese dong be repaired as they get older?

“I have a deep passion for handbags, even mangled ones,” said Pham Ngoc Hieu, founder of Auth Spa in Ho Chi Minh City’s Phu Nhuan District, about the motivation behind his luxurious bag 'spa.'

He realized that no matter how well-made they were, sooner or later, handbags would be damaged.

Meanwhile, it was hard to find a person able to repair them.

Handbag touching up, at the time, was still a strange service in Vietnam.

Hieu went abroad to learn techniques of handbag restoration before opening his own spa, becoming the pioneer in the country.

He and his partners offer cleaning and repair services on premium handbags, shoes, and accessories made by world-renowned luxury goods manufacturers including Hermes, Gucci, Chanel, Dior, Louis Vuitton or Burberry, which are stained, scratched or deformed.

"For changing an original color into another, it depends on which shade it is.

"The success rate for basic colors is about 90 percent while for limited ones it’s only 80 percent.”

Their first account was to restore a handbag valued at VND70 million (US$3,000).

“I was scared at first because the bag was too expensive," she recalled.

"Not clear about its leather’s characteristics, I tinted it wrongly.

"It took me a week to realize that for absorbing leathers, I needed to use a lighter shade of colors.”

Most valuable products repaired by Auth Spa are from Hermes, ranging from thousands to dozens of thousands of U.S. dollars for each item.

"Their owners take good care of them as they are too expensive.

"Most of the orders are to restore straps and decolored parts, which required both meticulousness and skills.

"Otherwise, we would have to pay considerable compensation."

According to her, fixers learn by doing. Through time, she has gained a lot of experience and created her own techniques of repairing handbags.

“Once we love the products and treat them as our own, we will be confident and give the best shot to take care of them,” Truc shared her philosophy.

In 2015, Hieu and Truc opened their first bricks-and-mortar workshop and got flooded with orders from Ho Chi Minh City and other localities.

Upper-class customers are the targets of ICUS – a luxury goods spa by Tran Huy Hoang, 29, in Ho Chi Minh City.

“A person who pays VND20 million [$867] for an item can definitely afford the repairing fee of VND3-4 million [$130-173]. It makes no sense to restore a bag that costs some VND500,000 [$21] at the same expenses,” Hoang said, adding the cost would be determined based on a bag’s damage levels and customer orders.

“I think for valuable, premium goods, the restoring expense of some million dong is not too high," he added.

Some 10 percent of his frequent customers are celebrities.

“They are picky and strict when it comes to leather finishes and deadlines," he told Tuoi Tre (Youth) newspaper.

"However, as authorized accessories need importing from abroad, late appointment is unavoidable.”

There are many invisible risks posed to people working in the industry, according to Hoang, since they have to deal with high-value products on a daily basis.

He recalled the compensation of VND20 million for a VND26 million ($1,126) Burberry bag for accidentally staining it when cleaning.

“The bag was constructed by different materials so staining and decoloring some parts were inevitable. The chance of making mistakes is about two to three of every 3,000 orders,” said Hoang.

Another risk is to deliver wrong items. He said a couple days ago, his staff carelessly put a VND30 million ($1,300) Chanel wallet into a wrong package for delivery.

“Luckily, my customer called saying she received a wallet that was not hers and asked us to take it back,” he said.

The most dangerous situation, according to Hoang, is to lose customers’ goods because it is not only about compensation but also trust issues. He has a budget to handle incidents.

“God blesses us, we barely need to use it,” he said.

To prevent any fault, craftsmen have to be able to shoulder pressure and pay attention to details. The reward is high earnings.

“They are all painstakingly selected and trained to both clean and repair handbags," said Hoang.

"Staff in charge of tinting and restoring have to be arts and architecture students.

"We have our own team of delivery workers.

"Customers can review final products before deciding to receive or send them back to our workshop for further fixes.”

Although it has just been introduced for six months, ICUS has developed its list of frequent customers.

“I will soon launch laundry services for handbags, shoes, and backpacks. The market still has room to grow,” he shared his vision.

Both Auth Spa and ICUS help their customers to distinguish real luxury goods from fake ones using their experience. The demand has risen since a lot of people are able to afford premium products but they cannot tell the difference between authentic products and counterfeits.