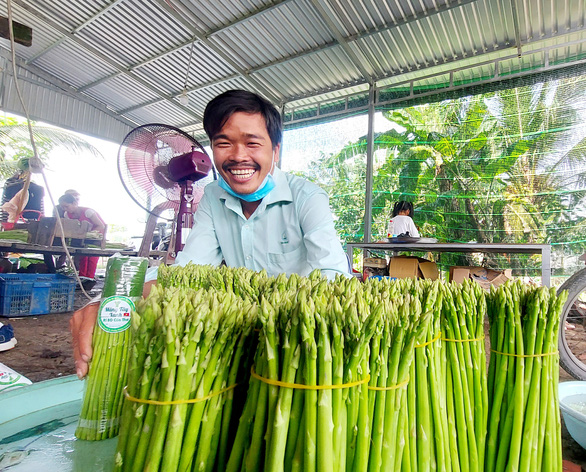 “Fellow farmers mistook it for grass at first. As they got to know I grew asparagus, they grew interested in the plant,” recalled Nguyen Ri Bo, a farmer in Co Do District, Mekong Delta city of Can Tho.

Asparagus – a foreign vegetable to Vietnam’s cuisine – is offering a silver lining to farmers in the country’s rice bowl.

From a bus driver to an asparagus farmer

Just like most farmers born and raised in Mekong Delta, Bo’s life was inexorably linked with rice.

On a paddy field of one hectare, he grew three crops per year yet still found himself unable to make ends meet.

Three years ago, Bo decided to lease the field at VND30 million (US$1,300) per year and switched to driving a bus.

“The money was not enough to send my children to school and support the family, so I drove a bus to earn a bit more. One time, on a trip, I learned that there was an emerging trend of planting and consuming asparagus and had an idea to start it up once again,” said Bo.

Planning to grow asparagus organically on his own paddy, Bo received suspicion from his fellow farmers.

Rumor had it that he planted asparagus to feed cows.

Some people even advised him to turn back to planting rice as it would generate much more profit.

Leaving them aside, Bo did several experiments to help asparagus adapt with the paddy field’s soil.

In 2020, he expanded the farming scope to one more hectare and had his wife, Phan Thi Thuy Trang, give a helping hand.

In the daytime, they worked restlessly on the field.

At night, they drove a truck delivering goods at VND900,000 ($39) a trip to invest back in the field and pay for workers.

“I worried all the time and could not sleep. There were some nights we loaded three trucks. However, all these ordeals were washed away as the asparagus started growing well,” said Trang.

Finding the market for the new product was another challenge set for them.

Every day, Bo drove nearly 200 kilometers to other Mekong Delta provinces, from Dong Thap to An Giang then back to Can Tho City to introduce asparagus for traders.

Under the impact of COVID-19, the consumption of fresh asparagus in the Mekong Delta drops 30 to 40 percent, urging Bo to develop new products.

Asparagus tea is his first experiment which is made by thinly chopping and drying young trunks.

“It helps to preserve the beautiful golden color, sweet taste and special fragrance of asparagus,” he said.

“Making tea from asparagus secures a sustainable market for this product,” he said, stressing tea would bring higher profits compared to fresh trunks.

Le Thanh Tuan, a local farmer, said Bo’s asparagus field has created jobs for several other farmers in the area.

“For a countryside life, the money is enough to pay for food and even savings,” said Tuan.