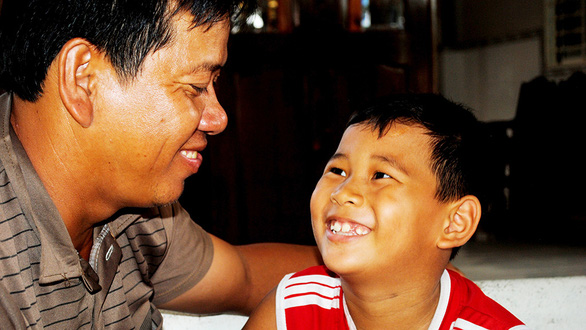 On the way to the hospital after going into labor, a pregnant woman was run over by a concrete mixing transport truck in Vietnam, causing the fetus to be squeezed out of her womb seven years ago.

The tiny unborn baby survived the crash and has grown into a healthy and happy one-legged boy.

It happened on October 25, 2014 in Long Xuyen City, An Giang Province, located in the Mekong Delta of Vietnam.

The husband was driving his wife on a motorbike.

The wife died on site. The fetus came out with one leg lost, so did his father.

Following a deep coma, a limb removal operation, the lack of his mother’s milk and warmth, the baby still beat all the odds.

Despite his tragic birth, Nguyen Quoc Huy has braved the ordeal of having one leg and leads a happy life with his father.

“My job is simply to see him smile each day,” said Nguyen Van Nam, his 39-year-old father, who lives in Cho Moi District, An Giang, which is considered a 'rice bowl' in the Mekong Delta.

They keep their chin up although each has only one leg left.

The physical disadvantage did not deter Nam from hard work. Whenever the rice crop season approaches, he is extremely busy.

“During this time the pests are everywhere, so I have to be in the fields all the time,” he said.

“I can hardly be home with my child.

"I miss him a lot, but I can’t leave until everything is properly taken care of.”

Coming home after days apart, the father rushed to embrace his young boy, who clutched him and showered him with kisses on the cheeks.

Huy readily asked his father to buy him a toy water gun at a nearby store.

Now the boy has grown up to be smart, cute, and sociable.

“His mother was still alive when he was forced out,” recalled Nam.

“I looked at her, telling her to pray to the Buddha.

“My son was flung meters away.

"That has been a haunting sight until now.

"It does not bother me, but reminds me of how valuable our lives are.

“I love my son even more every time I think about that incident.”

Following the traffic accident, Huy was admitted to Children’s Hospital 1 in Ho Chi Minh City, while his father was hospitalized at a local place before his transfer to Cho Ray Hospital in the same city.

During his month-long hospitalization, family members kept him in the dark about his son’s condition for fear that it might be too much for him to bear.

Nam only got to visit his baby after his discharge from the hospital.

“A nurse got me a wheelchair. She pushed me to my son’s room,” he said.

“It was a fleeting moment, but I had mixed feelings.

"I was anxious, happy, and distressed.

"I felt sorry for the baby.”

Nam made it back to his hometown as he regained his health. He prayed for his wife there, then returned to Ho Chi Minh City.

The pain of the widower seemed to double seeing his baby with only one leg left.

Yet the man suppressed it all. He had to be both his father and mother.

“It was quite a struggle at first because I lost one leg too, especially when my boy needed his regular health check in Ho Chi Minh City,” Nam said.

“The checks were one week apart at first, then two weeks, then one month, and three months.

"Ever since the COVID-19 pandemic broke out [last year], we haven’t been going to the city anymore.”

Hearing his father mention the term ‘COVID-19’ to a correspondent from Tuoi Tre (Youth) newspaper, Huy was quick to comment: “The COVID virus? Don’t go near it, dad! Dangerous!”

Learning to walk with an artificial leg at 11 months old was the toughest task for the young boy.

Watching the baby attempting to get the hang of it and crying out loud due to frustration, even Nam broke down in tears.

The father and son regularly had their health checks and walking lessons at the hospital.

“He could barely walk until two years old. Now, Huy only needs his artificial leg at school,” Nam said.

“He removes it the moment he’s back home.

"He can still run around.

"Unlike me. Without my fake leg, I lose to him every time.”

During his first years of life, Huy was prone to sickness. His father had a few sleepless nights taking him to the doctor.

“Now he’s fine. Sometimes, he cries to get a toy or some new cakes. That’s it,” said his father.

They actually received a donation from a philanthropist after the accident. With that, Nam rebuilt his house and purchased a piece of land in Hon Dat District, Kien Giang Province for use as rice fields.

“I had never owned such a fortune in my life. Thinking about my life now, at times I burst out in tears,” he said.

In recent days, Nam is deeply involved in his plantation work. He has to take care of the rice plants, the irrigation system, the fertilization process, and then the harvesting.

He needs a good earning for his child’s life.

Nam can be days away from home every ‘business trip’ to the rice fields.

The 60-kilometer distance did not stop him from rushing to Huy for some snuggling, then immediately back to his farm work.

“When the summer comes, he forces me to get him to the field,” Nam said.

“The boy likes to swim. He loves the canal and goes there every afternoon. He got a real tan after several days.”

There are two rice crops every year, according to Nam. From the seventh to the ninth lunar month, commonly known as the ‘floating season’ in the Mekong Delta, he spent all his time with Huy.

“I’d stay with him and teach him to read,” he said.

Huy is enrolled in an elementary school near his home. He gets to school in an electric toy car –quite a curious sight for those seeing him the first time.

Yet that has become too familiar to his teachers and peers.

“At first I drove him to school. It felt dangerous and difficult for him,” Nam said.

“I was worried a lot. What if he got bullied? But luckily, he was nice, so his teachers and friends, and even our neighbors love him and help him a lot.”

According to his father, Huy is a little ‘behind’ his friends in school achievements. However, the boy got encouragement from his father rather than rebuke.

“I myself loved to learn, but my family was poor so I couldn’t get to school,” Nam said.

“So now I have to make sure he gets a good education. I am so pleased to see him make progress.”