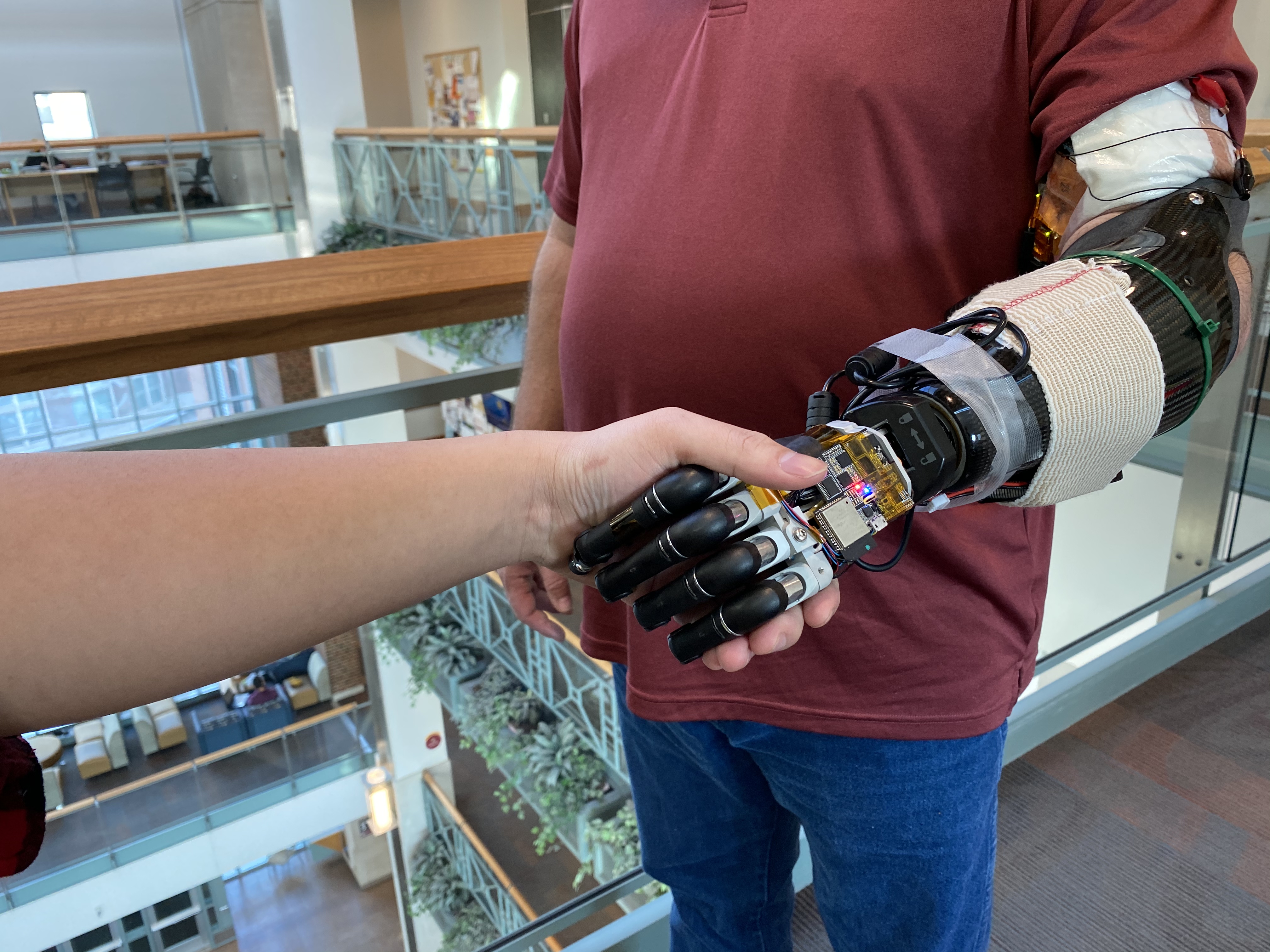 For more than a decade, Dr. Nguyen Anh Tuan, who now works at the University of Minnesota in the U.S., has been researching a single topic: the development of a chip and associated technology to support a robotic arm that helps the disabled regain a true sense of touch.

To many fans of science movies like Star Wars, robotic arms may be an old fairy tale.

For technology scientists like Dr. Tuan, what he has researched and accomplished over the past decade is only a modest fraction of what was shown in science films decades ago.

Born in 1992, he admits that he knew what his passion was as a young student.

Tuan was also fortunate to study with Prof. Yang Zhi when he was teaching at the National University of Singapore (NUS).

Yang found the Vietnamese man to have a lot of potential as a researcher, even though he was only a freshman, and invited him to work in his laboratory.

Both Prof. Yang and Dr. Tuan strongly believe that they can develop a possible interface that connects a person's brain to computers, thanks to the brain and neurological signals.

If their idea proves successful, it would usher in a new era of linking humans and computers in unimaginable ways.

While studying at NUS, Tuan and his colleagues managed to develop a chip processor that can both read brain signals and stimulate nerve tissue. They could also figure out the new algorithms that process brain signals effectively.

The combination between the chip and the new algorithms creates a two-way neural interface that connects human neural tissue and computers. This is an important technological area of the ambitious project to develop a robotic arm.

In other ways, they have created an AI-based system that translates the electrical information from the nerves into commands for executing the appropriate arm, hand, and finger movements built into the arm, according to Nvidia's website.

Dr. Tuan and other collaborators in Prof. Yang's lab firmly believe that one day they will be able to make a robotic arm that will restore a natural sense of touch to disabled people who have lost their arm or arms for some reason.

Although it may not be in the near future, they are confident in their ability to make it work.

The first of its kind

Despite the significant achievements, both Prof. Yang and Dr. Tuan are not satisfied. The two do not want their scientific research to remain on paper forever, but to do some good for the community after all.

After many discussions between them, Prof. Yang decided to return to the U.S. in 2015 to find a new path for their research and application.

He did not come back alone. Dr. Tuan became a postdoctoral fellow in the department of biomedical engineering at the University of Minnesota and joined Yang's lab at Minnesota State University in 2016 to further realize their dream of a robotic arm.

His work with his team is detailed in a paper titled 'A Portable, Self-Contained Neuroprosthetic Hand with Deep Learning-Based Finger Control.'

They got an excellent opportunity to apply their research in 2017 when Prof. Yang's lab was invited by Nerves Company to participate in a project to develop a neurological interface that helps armless people flexibly control a robotic arm and regain their natural sense of touch in the arm.

Tuan's team used their innovative chip, which they had been developing for many years, in this project to replace the popular signal brain receivers utilized by many teams at the time.

They were able to quickly develop an AI algorithm capable of decoding the neurological signals received from a patient with nearly 100 percent accuracy.

Their technological system, which processes brain signals, is able to help a patient control their prosthetic arm naturally.

Accordingly, amputees can now control their prosthetic limbs simply by thinking about the movement.

This means they can use their own minds to control each of the prosthetic's five fingers, instead of performing a few pre-programmed actions, as is the case with some existing products.

Because this type of prosthetic arm connects directly to the neutral neurological system rather than through parts that remain in the patient's arm, its effectiveness does not depend on disability status.

Using neural decoders and Deep Learning, this system allows humans to control pretty much anything digital with their thoughts, including playing video games and a piano, according to the Nvidia company's blog.

"As far as I know, our neuroprosthetic arm is the first of its kind in the U.S., as we are developing a prosthetic arm that uses microelectrodes and artificial intelligence to decode neural signals to help amputees regain their natural ability to control their lost limb," Dr. Tuan proudly told Tuoi Tre News.

Prof. Yang founded Fasikl, of which he is now CEO, in 2019 with the aim of attracting investment from domestic and foreign partners.

The team behind Fasikl has filed five patents for approval, including neural interface technology and AI.

One has been approved by the U.S. Department of Commerce and the other four are pending.

The team is working with some leading physicians at the University of Minnesota to expand the testing scale.

Indeed, Fasikl is not only focusing on amputees but also wants to use its product to diagnose and treat other diseases with diminished consciousness, such as Alzheimer's, Parkinson's, and painful nerve conditions.

Dr. Nguyen Anh Tuan, who has been working with Nerves Company since 2016, had the chance to work with two former soldiers, Cameron Slavens and Shawn Findley, who live in Texas.

It would be unforgettable for Tuan to observe the moment when the two could regain a real sense of touch after dozens of years.

To them, Tuan and the other members of his team owe a great debt of gratitude.

They gave him and the team a valuable opportunity to test an innovative technology that is still too new to be safe for the public.

"If we can commercialize the arm, the very first thing I would like to do is make it available to the volunteers who participated in our testing phase with great enthusiasm and fairness," said Dr. Tuan.