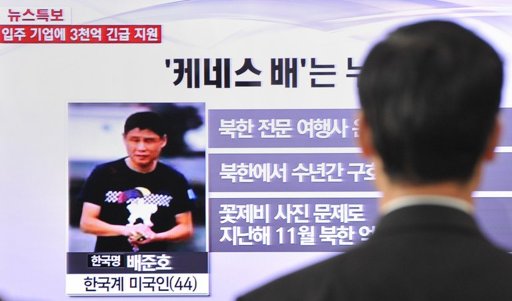 A Korean-American sentenced to hard labour in North Korea has appealed to the United States to secure his early release, saying he has been in poor health, according to an interview published Wednesday.

"I ask the US government for help and hope it will make more efforts for my return at an early date," tour operator Kenneth Bae said in an interview with the Chosun Sinbo, a pro-Pyongyang newspaper published in Japan.

Bae said he had been in poor health since he was sent to a special prison in May.

Bae, whose Korean name is Pae Jun-Ho, was arrested in November last year as he entered the northeastern North Korean port city of Rason.

He was sentenced to 15 years' hard labour for subversion and began serving his time on May 14, Chosun Sinbo said.

State media said earlier that he had been convicted of seeking to "topple" the regime in Pyongyang.

The North's court has described Bae as a militant Christian evangelist who smuggled inflammatory material into the country and sought to establish a subversive base in Rason.

"What I did was an unpardonable act, but I wish for a smooth and quick settlement so that I can be reunited with my family," Bae said.

Chosun Sinbo said its reporter visited the prison on June 26 to see Bae in his cell which had a bed, a desk and a television.

One of the pictures carried by the newspaper showed Bae wearing glasses and a blue prison uniform and sitting on a chair.

In the second picture he was seen working in a vegetable field, watched by a guard.

The paper said Bae wakes at 6:00am and does eight hours of mostly farm work every day.

He has been seeding and weeding corn, potato and bean plots, it said.

"This is my first farm work in my life," Bae said.

The 44-year-old said he had been leading a difficult life in prison because he was suffering from diabetes, a fatty liver, hardening of the arteries and a pain in the waist.

So far he has received five letters but telephone calls are banned, Chosun Sinbo said.

Bae was sentenced at a time of heightened military tensions on the Korean peninsula, leading to suggestions that Pyongyang hoped to use him as a bargaining chip to extract concessions from the United States.

Pyongyang has staunchly denied any such strategy and said it has no intention of inviting any leading US figure to discuss Bae's release.

Several Americans held in North Korea in recent years were freed following high-profile visits from the likes of former US presidents Bill Clinton and Jimmy Carter.