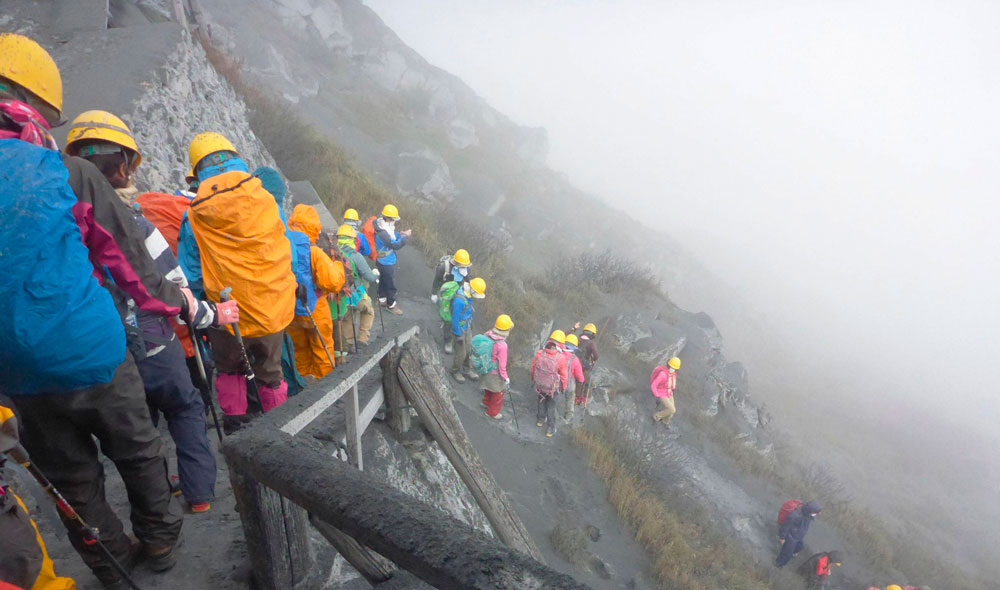 TOKYO, Sept 27 - A Japanese volcano popular with hikers erupted on Saturday, killing one woman and seriously injuring more than 30 people, officials and media said. The mountain draws walkers who come to admire the autumn colours on the trees. "It was like thunder," a woman told public broadcaster NHK of the first eruption at the volcano in seven years. "I heard boom, boom, then everything went dark." The Japan Meteorological Agency said the volcano, Mount Ontake, which straddles Nagano and Gifu prefectures 200 km (125 miles) west of Tokyo, erupted just before midday and sent ash pouring down the mountain's south slope for more than three km (two miles). Tokyo's Haneda airport said incoming domestic flights were experiencing delays of about 40 to 50 minutes because they were forced to change routes. International flights to and from Haneda were not affected by the eruption, the airport said. NHK, citing the local fire brigade, reported that one woman had been confirmed dead. More than 30 people were seriously injured and 10 of them were unconscious, it said. According to police, more than 250 hikers at one stage had been stranded on the mountain, which is 3,067 metres (10,062 feet) high and last erupted in 2007. No nuclear power plants are located nearby. NHK said about 230 hikers had made their way down the mountain, while 41 people remained stranded and were expected to try descending the next day. Prime Minister Shinzo Abe, who returned from the United States on Saturday, said he had ordered the military to help in rescue efforts. "I instructed to do all we can to rescue the people affected and secure the safety of the trekkers," Abe told reporters. Nagano police sent a team of 80 to the mountain to assist the climbers, while Kiso Prefectural Hospital, near the mountain, said it had dispatched a medical emergency team. "We expect a lot of injured people so we are now getting ready for their arrival," said an official at the hospital. As of 8:30 p.m. local time, the eruption was continuing, NHK said. "It's all white outside, looks like it has snowed. There is very bad visibility and we can't see the top of the mountain," Mari Tezuka, who works at a mountain hut for trekkers, told Reuters. "All we can do now is shut up the hut and then we are planning on coming down... This is a busy season because of the changing autumn leaves. It's one of our busiest seasons."