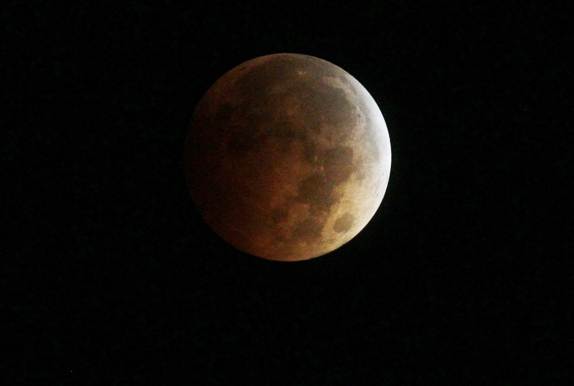 Stargazers in the Americas and Asia were treated to a lunar eclipse Wednesday, a celestial show that bathed the moon in a reddish tint to create a "blood moon".

During the total lunar eclipse, light beams into Earth's shadow, filling it with a coppery glow that gives it a red hue.

NASA provided live footage via telescope of the eclipse, showing a black shadow creeping across the moon in a crawl that took about an hour.

The NASA web site was peppered with Tweets bubbling with questions and comments on the heavenly phenomenon.

"This is amazing. Thank you for this opportunity," read a Tweet from the handle @The Gravity Dive.

"Is there any crime increase during this process? Any psychological problems?" wrote a person who identified herself as Alisa Young.

A NASA commentator explained that during the total eclipse, if you were standing on the moon and looking at the earth, you would see it all black, with ring of fire around it.

In Hong Kong, free viewing locations were set up on a harbourside promenade by the Hong Kong Space Museum for the public to observe the various phases on telescopes.

In Tokyo's Roppongi fashion and entertainment district, enthusiasts performed yoga exercises under the blood moon. Many others had climbed atop the city's skyscrapers to view the sky.

On Australia's east coast, a live video feed set up by the Sydney Observatory was hit by cloud cover, thwarting some viewers.

In New Zealand, the moon will be close to its highest point in the sky, according to Auckland's Stardome Observatory & Planetarium, making for a view of the spectacle unobstructed by buildings.

The event was not visible in Africa or Europe, NASA said.

The eclipse is the second of four total lunar eclipses, which started with a first "blood moon" on April 15, in a series astronomers call a tetrad.

The next two total lunar eclipses will be on April 4 and September 28 of next year.