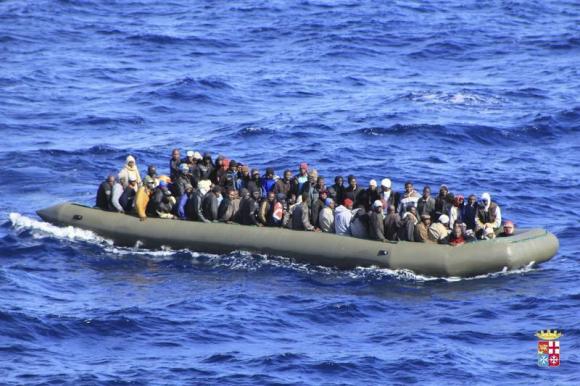 An estimated 300 people probably died this week after attempting to reach Italy from Libya in stormy weather, the U.N. refugee agency said on Wednesday after speaking to a handful of survivors.

An Italian tug boat rescued 9 people who had been on two different boats on Monday and brought them to the Italian island of Lampedusa on Wednesday morning.

They are the only known survivors from their two boats, leaving more than 200 unaccounted for, they told representatives of the United Nations High Commissioner for Refugees (UNHCR).

The survivors said there had been a third large dinghy that had also left Libya on Saturday and was missing, Barbara Molinario, a spokeswoman for the UNHCR, told Reuters.

In an incident apparently related to yet another boat full of migrants, the Italian coastguard picked up 105 people on Sunday in extremely dangerous sea conditions near to Libya and with the temperature hovering just a few degrees above zero.

Twenty-nine from that dinghy died of hypothermia in the 18 hours it took the coast guard to ferry them to Italy.

The recent deaths at sea have reignited criticism of Italy's decision last year to end a full-scale search-and-rescue mission, known as Mare Nostrum, due to concerns over costs.

Pope Francis on Wednesday told pilgrims in St. Peter's Square that he was "following with concern the news out of Lampedusa", saying he would pray for the victims and "again encourage solidarity so that those in need are rescued".