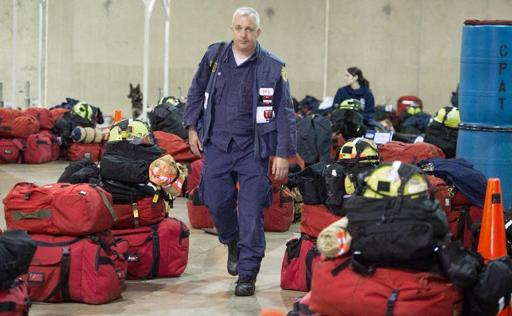 Rescuers in Nepal searched frantically on Sunday for survivors of a quake that killed more than 2,000, digging through rubble in the devastated capital Kathmandu and airlifting victims of an avalanche at Everest base camp.

Terrified residents of Kathmandu were woken by fresh aftershocks in the worst disaster to hit the impoverished Himalayan nation in more than 80 years, with many forced to spend the night trying to sleep out on the streets and open ground in tents.

Hospitals were so stretched that medics had to set up tents outside to treat patients.

The historic nine-storey Dharahara tower, a major tourist attraction, was among the buildings brought down Saturday, with at least a dozen bodies recovered from the ruins of the 19th-century tower.

Offers of help poured in from around the world, with the United States and European Union announcing they were sending in disaster response teams.

India flew out its stranded citizens in military planes while a 62-strong Chinese rescue team arrived with sniffer dogs.

National police spokesman Kamal Singh Bam said the number known to have died in Nepal had risen to 1,953 while 4,629 people had been injured.

Officials in India said the toll there now stood at 53, mainly in the eastern state of Bihar, while Chinese state media said 17 people had been killed in the Tibet region.

"We have deployed all our resources for search and rescues," Bam told AFP.

"Helicopters have been sent to remote areas. We are sifting through the rubble where buildings have collapsed to see if we can find anyone."

The Red Cross said it was concerned about the fate of villages near the epicentre of the quake northwest of Kathmandu.

Officials said 17 people were so far known to have died on Mount Everest where an avalanche triggered by the earthquake buried part of base camp Saturday.

It is the deadliest disaster in Everest's history and comes almost exactly a year after an avalanche killed 16 sherpa guides.

AFP's Nepal bureau chief Ammu Kannampilly, on an assignment at base camp, reported that six helicopters had managed to reach the mountain on Sunday morning after the weather improved overnight.

A stunning image captured by the agency's South Asia photo chief Roberto Schmidt showed a massive cloud of snow and debris cascading onto base camp, burying scores of climbers and flattening tents.

"People being stretchered out as choppers land - half a dozen this morning," Kannampilly said in a text message.

The country's cellphone network was working only sporadically, while large parts of the capital were without electricity.

AFP correspondents in Kathmandu reported that tremors were felt throughout the night, including one strong aftershock at dawn.

"It has been a sleepless night, how can we sleep? It has been shaking all night. We are just praying that this will end and we can return home," said Nina Shrestha, a 34-year-old banker who spent the night with hundreds of people on open ground in the capital's Tudhikhel district.

As rescuers sifted through the huge mounds of rubble, the hospitals were overflowing with victims who suffered multiple fractures and trauma.

"We have treated many people since yesterday, majority children," said Samir Acharya, a doctor at Nepal's Annapurna Neurological Hospital.

"Most patients have head injuries or fractures. Two of our patients died, two are critical."

Acharya said medics were working out of a tent set up in a parking lot because of overflowing patients, while some patients were too scared to stay in the building.

Families had grabbed whatever possessions they could muster and sought shelter on the streets, many of which had been split asunder.

Weather forecasters warned that rain was on the way, with dark clouds looming over Kathmandu and promising more misery for displaced survivors.

Snowfalls on Saturday had thwarted efforts to airlift survivors from Everest, where around 800 mountaineers were gathered at the start of the annual climbing season, cancelled last year after the sherpa deaths.

Google executive Dan Fredinburg was one of the climbers to have been confirmed as having been killed.

Experienced mountaineers said panic erupted at base camp, which has been "severely damaged", while one described the avalanche as "huge".

"Seventeen have been reported dead so far and 61 are injured," said Tulsi Gautam of Nepal's tourism department which issues permits to climb the world's highest mountain.

"Those who are able are walking down. Others are being airlifted."

Kannampilly said many of those stranded at the scene were walking down the mountain rather than risk being stuck for days.

George Foulsham, a Singapore-based marine biologist, described the moment that the disaster struck.

"I was outside, saw a white 50-storey building of white come at me. I ran and it just flattened me," he told AFP.

"I tried to get up and it flattened me again. I couldn't breathe, I thought I was dead. When I finally stood up, I couldn't believe it passed me over and I was almost untouched.

"I saved for years to climb Everest. It feels like the mountain is saying it's not meant to be climbed for now. Too much of a coincidence to see this twice in two years."

Nepal and the rest of the Himalayas are particularly prone to earthquakes because of the collision of the Indian and Eurasia plates.