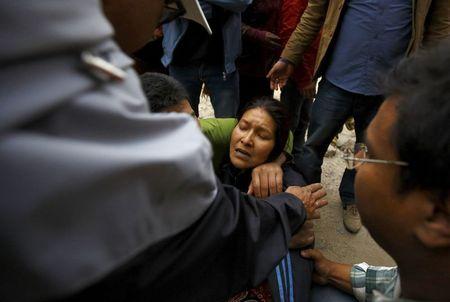 Nepal steps up rescue efforts as quake toll jumps to 1,800

KATHMANDU - Nepal ramped up efforts on Sunday to rescue people trapped in the rubble of collapsed buildings after an earthquake devastated the heavily crowded Kathmandu valley, killing at least 1,800, and triggered a deadly avalanche on Mount Everest.

People used their hands in many places to dig for survivors in the rubble of collapsed buildings.

The government urged nations to send aid and braced for the toll to rise after rescuers overnight were hampered by strong aftershocks, blocked highways and a lack of equipment.

Bodies piled up at one hospital in Kathmandu, where police officer Sudan Shreshtha said his team had brought 166 corpses overnight.

"I am tired and exhausted, but I have to work and have the strength," Shreshtha told Reuters as an ambulance brought three more victims to the Tribhuvan University Teaching Hospital.

Bodies were heaped in a dark room in the hospital, some covered with cloth, some not. A boy aged about seven lay, his face half missing and his stomach bloated like a football. The stench of death was overpowering.

Outside, a 30-year-old woman who had been widowed wailed: "Oh Lord, oh God, why did you take him alone? Take me along with him also."

Authorities also scrambled to provide shelter in the capital, Kathmandu, for thousands of people who spent the night outside in freezing temperatures and patchy rain, too afraid to return to their damaged homes.

Early on Sunday, people milled about in parks and streets strewn with rubble. The 7.9 magnitude quake struck at midday on Saturday at a busy time of year for the tourism-reliant country's trekking and climbing season, with an estimated 300,000 foreign tourists in the country.

The government planned to pitch tents and turn schools and other public buildings into shelters, said Rameshwor Dangal, a home ministry official. It would also re-open roads and send helicopters to rescue people.

Nepal's home ministry put the death toll at 1,805, with about 4,700 injured. At least 300 had been killed in the capital, a city of about 1 million people where homes are often old, flimsy and packed close together.

Rescue workers worked through the night using bulldozers, pick axes and shovels to free those who were trapped.

Foreign climbers and their Nepalese guides around Mount Everest were caught by the tremors and a huge avalanche that claimed the highest toll of any disaster on the world's highest mountain.

Seventeen bodies were recovered on Mount Everest base camp and 61 were injured when part of the base camp was engulfed by the snowslide, Ang Tshering Sherpa, president of the Nepal Mountaineering Association, told Reuters.

A first helicopter took off from Kathmandu on Sunday morning to airlift the injured after flights were delayed by cloudy weather, Sherpa said.

Hospitals across the impoverished nation of 28 million people struggled to cope with its worst quake in 81 years. They expected a fresh influx of patients on Sunday but medical supplies were running low.

Kathmandu's Bir Hospital had received 300 to 350 patients with serious injuries through Saturday, and most of them died, said paramedic Dinesh Chaudhary. He said the hospital was procuring medicines from shops outside.

The earthquake, centred 50 miles (80 km) east of the second city, Pokhara, was all the more destructive for being shallow.

Rescue operations had still not begun in towns in some remote areas.

Among the capital's landmarks destroyed in the earthquake was the 60-metre-high (200-foot) Dharahara Tower, built in 1832 for the queen of Nepal, with a viewing balcony that had been open to visitors for the last 10 years.

A jagged stump was all that was left of the lighthouse-like structure. As bodies were pulled from the ruins, a policeman said up to 200 people had been trapped inside.

Across the city, rescuers scrabbled through destroyed buildings, among them ancient, wooden Hindu temples.

"I can see three bodies of monks trapped in the debris of a collapsed building near a monastery," Indian tourist Devyani Pant told Reuters. "We are trying to pull the bodies out and look for anyone who is trapped."

Neighbouring India, where 44 people were reported killed in the quake and its aftershocks, sent military aircraft to Nepal with medical equipment and relief teams. It also said it had dispatched 285 members of its National Disaster Response Force.

In Tibet, the death toll climbed to 17, according to a tweet from China's state news agency, Xinhua.

Tragedy in the moutains

More than 1,000 climbers were on Everest at the start of their season when disaster struck.

Romanian climber Alex Gavan tweeted on Saturday that there had been a "huge earthquake then huge avalanche" at Everest base camp, forcing him to run for his life.

In a later tweet he made a desperate appeal for a helicopter to fly in and evacuate climbers who had been hurt: "Many dead. Much more badly injured. More to die if not heli asap."

In the Annapurna mountain range, where scores were killed in the nation's worst trekking accident last year, many hikers were stranded after the quake, according to messages on social media, but no deaths there had been reported.

Nepal, sandwiched between India and China, has had its share of natural disasters. Its worst earthquake in 1934 killed more than 8,500 people.