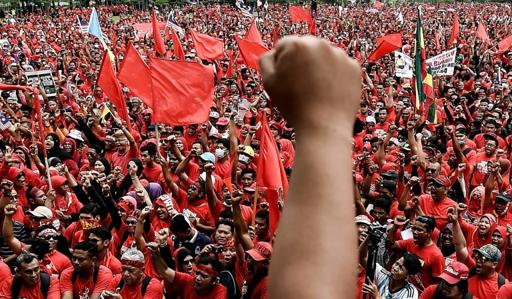 Malaysian riot police on Wednesday fired water cannon on ethnic Malay protesters staging a pro-government rally in the capital Kuala Lumpur that has raised racial tensions in the multi-ethnic country.

At least several thousand members of the Muslim ethnic Malay majority marched through the heart of the capital to declare support for Prime Minister Najib Razak, a Malay who is facing calls to step down over a financial scandal.

Shadowed by heavy security, the demonstrators also claimed that long-held Malay dominance of the country was being challenged by the Chinese.

"Our Malay way of life is under threat. We want to support Malays, Najib, and tell the Chinese to keep their place," said demonstrator Faisal Nur, 23.

He was among large numbers of people bussed in by rally organisers from the ruling United Malays National Organisation (UMNO) from the party's rural strongholds.

Many Kuala Lumpur businesses run by Chinese -- who make up about a quarter of Malaysia's population -- were shuttered for the day out of fear of disturbances, including the area where water cannon was fired.

A heavy security presence involving hundreds of police and riot personnel were deployed throughout the capital.

The rally has been criticised as racially provocative by leading figures in both UMNO and the opposition.

The demonstration was staged in response to much larger street rallies last month that called for Najib's resignation and deep reform of a government whose critics accuse it of repression, corruption and electoral chicanery to stay in power.

The demonstration, which seemed otherwise peaceful, was one of the clearest public displays yet of what many Malaysian moderates warn is a worrying trend toward racial and religious intolerance among Malays.

UMNO has controlled Malaysia for 58 years, granting economic and other advantages for Muslim Malays, saying they were needed to prevent their dominance by the sizeable ethnic Chinese and Indian minorities.

But following a string of election setbacks for the government, party hardliners have increasingly catered to Malay voters by portraying the commercially dominant Chinese as a threat to the Malay privileges.

Najib, who was already under fire over huge sums of money missing from a state firm he launched, has been deeply tarnished by the revelation in July that Malaysian investigators had discovered nearly $700 million in deposits into his personal bank accounts.

His government has called them "political donations" from Middle Eastern sources but has refused to give details. The opposition has called it evidence of rampant UMNO money politics.

Najib subsequently sacked his attorney general and made other personnel moves that critics say have hampered criminal investigations into the funds.