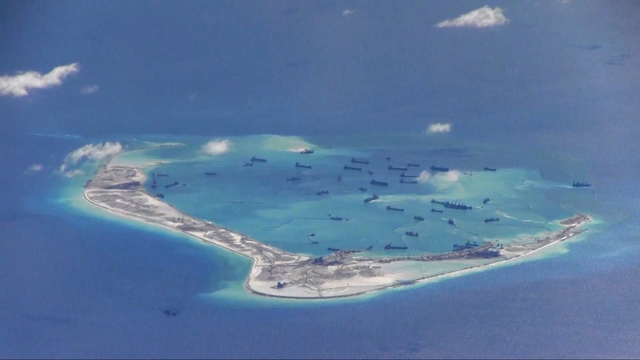 The U.S. Navy plans to conduct patrols within 12 nautical miles of artificial islands in the East Vietnam Sea about twice a quarter to remind China and other countries about U.S. rights under international law, a U.S. defense official said on Monday.

"We're going to come down to about twice a quarter or a little more than that," said the official, who was not authorized to speak publicly about Navy operational plans.

"That's the right amount to make it regular but not a constant poke in the eye. It meets the intent to regularly exercise our rights under international law and remind the Chinese and others about our view," the official said.

U.S. Deputy National Security Adviser Ben Rhodes on Monday said there would be more demonstrations of the  U.S. military's commitment to the right to freely navigate in the region.

"That's our interest there ... It's to demonstrate that we will uphold the principle of freedom of navigation," Rhodes told an event hosted by the Defense One media outlet.

Rhodes' comments came a week after a U.S. guided-missile destroyer sailed close to one of Beijing's man-made islands in the East Vietnam Sea last week.

China's naval commander last week told his U.S. counterpart that a minor incident could spark war in the East Vietnam Sea if the United States did not stop its "provocative acts" in the disputed waterway.

The USS Lassen's patrol was the most significant U.S. challenge yet to the 12-nautical-mile territorial limit China claims around artificial islands it has built in Vietnam’s Truong Sa (Spratly) archipelago.

China claims most of the East Vietnam Sea, through which more than $5 trillion of world trade transits every year. Vietnam, Malaysia, Brunei, the Philippines and Taiwan all have rival claims.

Rhodes said the goal in the dispute was to come to a diplomatic framework to resolve these issues.

U.S. Vice Admiral John Aquilino, deputy chief of naval operations for operations, plans and strategies, declined to comment about when the next patrols would take place.

"We do operations like that all the time around the world. That will continue for us," he told Reuters after his remarks at the same conference. "We'll just keep going."

Defense Secretary Ash Carter may visit a U.S. Navy ship during his upcoming visit to Asia, but is not expected to be on board during any Navy freedom of navigation operations, the U.S. defense official said.