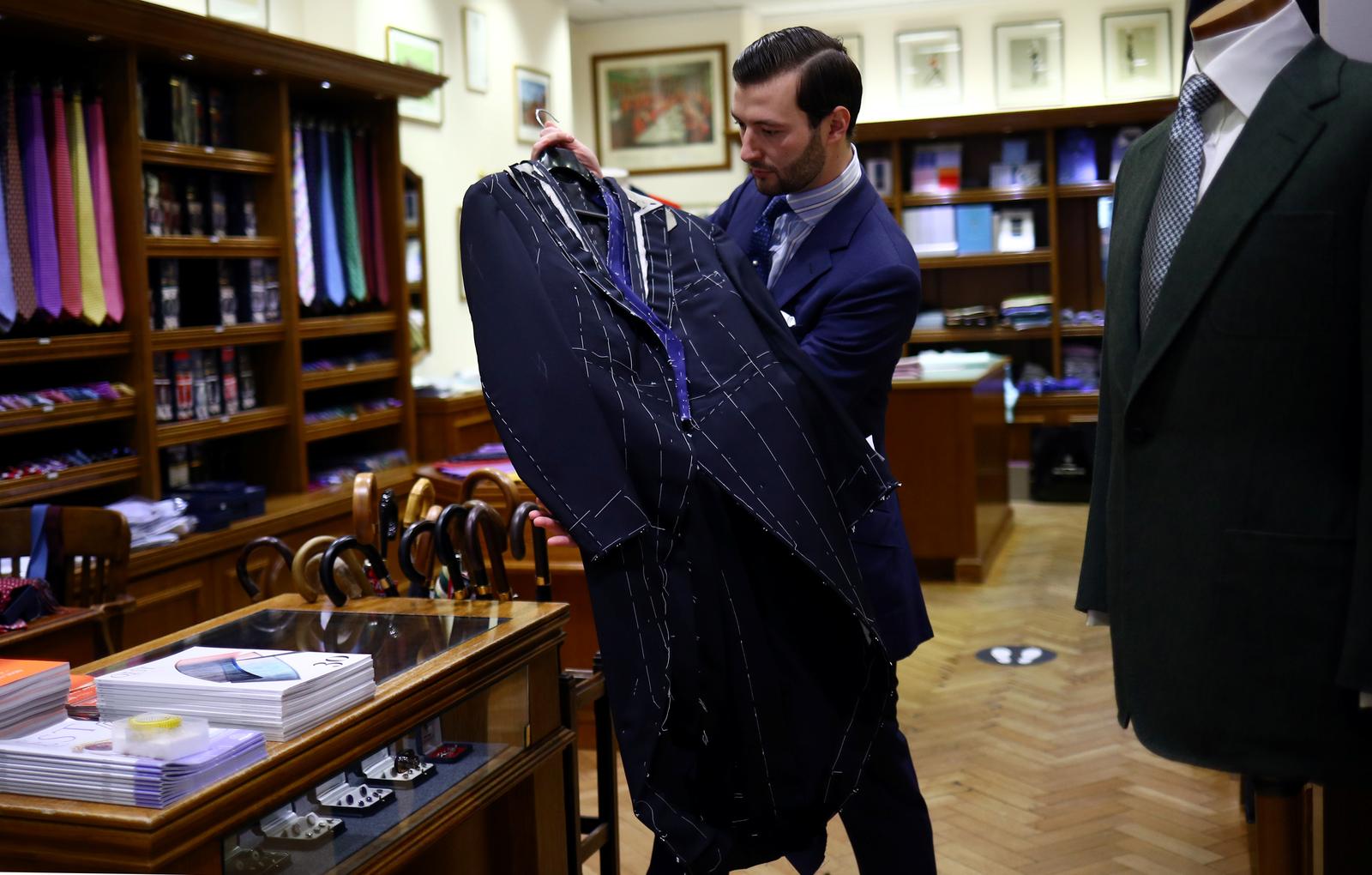 Unsuited to new era? Fate of formal fashion hangs by a thread

MILAN/SYDNEY/LONDON – Italian luxury designer Brunello Cucinelli makes men’s suits that sell for up to 7,000 euros ($8,200). But even he - like most people across the globe - hasn’t worn a suit for months, let alone bought one.

“We’ve all been locked away at home, so this is the first jacket I have put on since March,” Cucinelli told Reuters in Milan as he presented his latest collection in September, wearing a light grey blazer.

Most people in “white-collar” jobs are working from home, with a newfound love of sweatpants, a trend that some experts expect to outlive the pandemic. And few, if any, weddings or parties are taking place.

This seismic shift in behaviour is having profound repercussions across the supply chain for suits and formal wear, upending a sartorial sector spanning every continent.

In Australia, the world’s biggest producer of merino wool, prices have been in freefall, hitting decade lows. Many sheep farmers are in dire straits, storing wool in every available shed in the hope of a rebound.

In northern Italy, the wool mills that buy from the farmers and weave the fabric for high-end suits have seen their own orders from retailers nosedive.

In the United States and Europe, several retail chains specialising in business attire such as Men’s Wearhouse, Brooks Brothers and TM Lewin have closed stores or filed for bankruptcy over the past few months, and more could follow.

Players at all levels told Reuters they were being forced to adapt to survive, from farmers turning to other forms of agriculture to mills making stretchier fabrics for a new breed of suits that don’t crease easily and are more resistant to stains.

“People want to be more comfortable and are less inclined to wear a formal suit,” said Silvio Botto Poala, managing director of Lanificio Botto Giuseppe, a wool mill in Italy’s textile hub of Biella which counts Armani, Max Mara, Ralph Lauren and Hermes among its customers.

“With Zoom conferences and smart working, you’ll see men wearing a shirt, perhaps even a tie, but not many suits.”

Fine wool prices in Australia have more than halved during a tumultuous 18-month period, as usually healthy purchases of merino wool from Italian mills have almost ground to a halt.

“They’ve all got wool to get rid of before they even come back to the market here,” said Blanch, speaking on the phone from wool auctions in Sydney’s western suburbs.

“If the shops aren’t open, everything just backs up. A lot of the orders we had bought wool against just got cancelled by their clients in the U.S. and around Europe.”

He said that China, which alongside Italy purchases most of Australia’s more than A$3 billion in annual wool exports, was now “the only show in town” even though Chinese buyers were also acquiring less wool.

Many merino sheep farmers are storing their wool in sheds or storage facilities; though some who are still emerging from a three-year drought are selling their bales into the weak market to stay financially afloat.

“Not everyone is big enough to hold on to their wool clip and wait for the price to change,” said Dave Young, a farmer near the New South Wales town of Yass.

“We are in the position where we have to meet the market within a relatively short time after shearing.”

Young, who has about 4,500 sheep on his property, said he had re-focused some operations to provide lamb meat instead.

A jump up the food chain to northern Italy, and Botto Poala expects his mill’s sales to fall by 25% from 63 million euros last year and that they will take 2-3 years to recover.

However his business is insulated to a degree because it mostly makes womenswear fabric; others are more pessimistic.

“For some businesses, we are talking a 50%-80% plunge in sales,” said Ettore Piacenza, general manager of the Fratelli Piacenza wool mill, a centuries-old family business with an annual turnover of 52 million euros. He also heads the wool mills department of the local business association.

Botto Poala said more than 50% of his mill’s turnover now comes from wool that has been made stretchier by treating in a particular way or having lycra added to it.

This is because whatever demand is left for suits, it is more likely to be for fabrics that are more resistant to stains and don’t crease easily, while such cloth can also be used for casual wear, wool mills say.

Italian luxury label Etro, for example, has just launched a “24-hour jacket” made of jersey and mixing wool and cotton.

'My clients are in PJs'

A gradual move towards casual wear has been going on for years. In 2019, even Goldman Sachs - a bastion of bespoke suits - relaxed the dress code for its staff. Not to mention the rise of the Silicon Valley hipster crowd.

But COVID has turbocharged that shift - boosting sales of comfort clothing and sportswear at the expense of business attire.

In the second quarter of this year, when much of the world was in lockdown, Nike was the hottest brand according to Lyst, a global fashion search platform that analyses the behaviour of more than nine million online shoppers a month.

It was the first time since the Lyst Index began that a luxury fashion brand did not take the top spot.

Gap’s Athleta unit, which sells tights, jogging pants, sweats and workout tops, was its best-performing fashion line in the three months to Aug. 1.

Sales rose 6%, compared with a 52% fall at Banana Republic, known for dressier attire.

Suits ranked among the highest-discounted and lowest-selling items in France, Italy and Germany in September, according to data compiled by StyleSage, which combs prices on websites.

Cheaper to mid-market labels including Asos, Topman, Guess and Hugo Boss had the steepest markdowns, at up to 50%.

The collapse in demand for office attire led storied U.S. retailers, also including Jos. A. Bank and J. Crew, to file for bankruptcy over the summer and many more retailers face an uncertain future.

“I confess I have not purchased any office wear this year. I can tell you for a fact walking around the City, there are very few suits on display,” said James Whitaker, a partner at law firm Mayer Brown in London.

Indeed business has been “extremely slow” even since the end of lockdown for Jasper Littman, a tailor trained in Savile Row, the London street renowned for its bespoke tailoring for men.

Littman said his clients, mostly lawyers and bankers, “are sitting at home in their pyjamas”.

Customers are reluctant to risk riding the train to pick up even the suits that are already made with a deposit paid.

“There’s no point in them doing that, because they’d be taking delivery of a suit they can’t wear.”