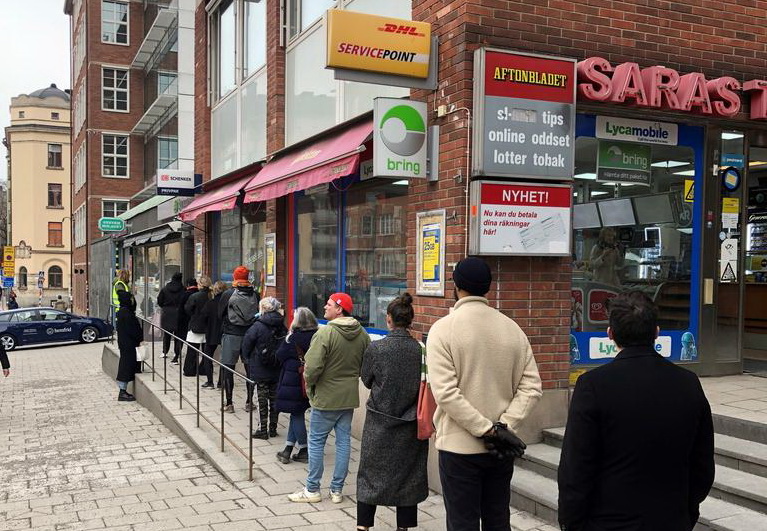 On a chilly Saturday in central Stockholm, around 150 people queue on a street, squinting into the low sun, checking their watches and hoping to make it into Systembolaget - Sweden’s state alcohol monopoly - before it shuts at 3 p.m.

“This is the last chance to buy alcohol before Monday,” says musician Calle Lehman as he stands in the ever-expanding line. “The big Saturday afternoon queue is a bit of a tradition.”

Yet this custom, and Systembolaget’s monopoly, is being put to the test by online retailers offering Swedes an alternative to standing in a long queue during a deadly pandemic.

Wine retailer and rating app Vivino, which has 50 million users globally, says Sweden has become one of its top 20 markets worldwide over the past year, for example.

Winefinder.se said its turnover is up 50% in the first two months of 2021 compared with the same period last year, as the monthly rate it gained new customers spiked by 200%.

“COVID has changed customer behaviour and opened a lot of people’s eyes to other choices online,” said Magnus Ericsson, CEO of Winefinder.se.

After centuries of concern about rampant alcohol consumption and several unpopular attempts to ration booze, Systembolaget was established in 1955 as the only retailer in Sweden that can sell tipple stronger than 3.5%.

Yet, there are only 83 Systembolaget stores in Stockholm, or one for every 12,000 of the city’s roughly 1 million inhabitants - hence the queues snaking along its streets.

Until the 1990s, shoppers were required to wait at a kiosk while attendants fetched requested items, as it was thought that eye-contact would shame people into reduced orders.

But today Swedes can freely wander the shop’s featureless interior and fill their own shopping baskets. More recently, some are even choosing to do this online, and unwatched, in their own home.

A 2007 ruling by the European Court of Justice (ECJ) said Swedes could import alcohol from companies elsewhere in the European Union. This paved the way for online players like Vivino, which is Danish, to sell wine into Sweden.

Previous challengers of Systembolaget’s monopoly include the North Korean embassy in Stockholm, which in the 1970s set up a short-lived bootleg operation. The black market plot was uncovered and some North Korean diplomats expelled, but the monopoly’s latest rivals are proving harder to contain.

Systembolaget has turned to the Swedish courts for help, gaining some initial success.

In October, a court ruled that Danish website Winefinder.se broke the law by infringing on Systembolaget’s retail monopoly. However, Winefinder.se continues to trade as it appeals the decision.

Vivino builds a taste profile for each of its users. Open the app and you might see: “A personalised selection of wines you didn’t know you wanted.”

Systembolaget says this contravenes rules that prohibit “intrusive” marketing of alcohol, something that Vivino denies.

“Our attorneys look carefully at laws and we make sure to follow regulations wherever we are,” said Vivino’s founder Heini Zachariassen, adding that it is the app’s users who endorse individual wines by rating them.

This concerns Systembolaget because it is banned from advertising its goods, which has made it difficult to promote the website it launched in 2000, or the home-delivery service that it began on a large scale in 2019 and expanded last year, but only covers about two-thirds of the country.

“Systembolaget’s purpose is to limit the harmful effects of alcohol in society,” the monopoly told Reuters.

Its website is as sober and restrained as the non-descript shelving in its stores, and uptake has been small, with online sales only making up around 2% of total sales last year, although such sales rose 42% compared with 2019.

Systembolaget does have an Instagram page, though, mainly featuring wholesome images of foods that might pair well with certain wines, beers or spirits mostly absent from the photos.

Around 75% of Swedes say they are happy with Systembolaget, according to pollster MedieAkademin. But Fanny Hedenmo, among those queuing on Saturday, described it as a love-hate relationship, particularly when it came to the monopoly’s opening hours, which see its stores close at 7 p.m. on weekdays.

“We Swedes are tolerant of this type of governance, though that could change fast, particularly if online shopping becomes the norm,” the 28-year-old said.

“Realising with horror that it’s 6:50 on a Friday night and sprinting to the nearest Systembolaget ... that’s just a part of life here.”