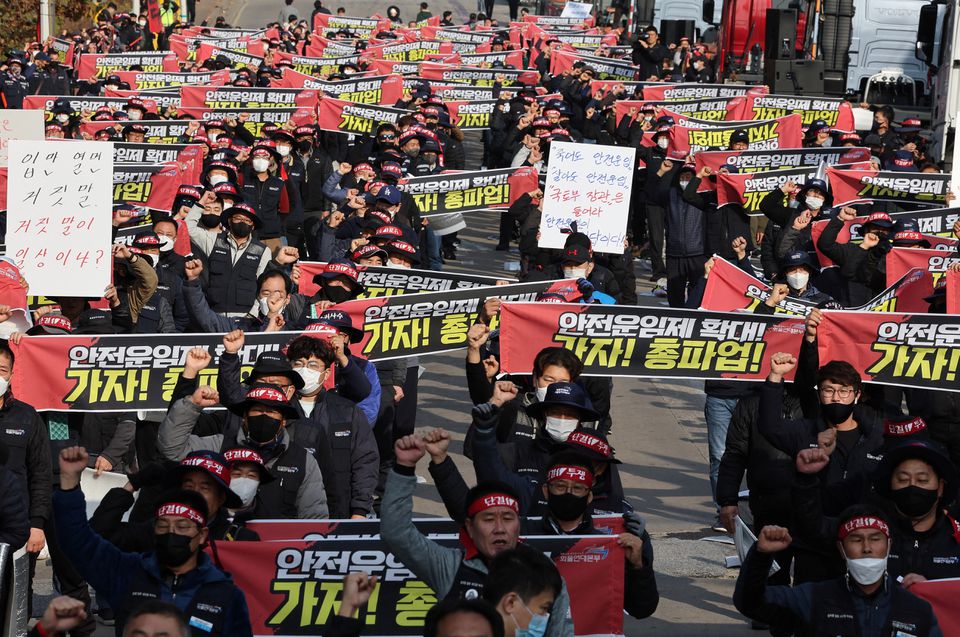 Unionised truckers in South Korea kicked off their second major strike in less than six months on Thursday, threatening to disrupt manufacturing and fuel supplies for industries from autos to petrochemicals in the world's 10th-largest economy.

With fuel costs soaring, the truckers are calling on the government to make permanent a minimum-pay system known as the 'Safe Freight Rate' that is due to expire by the end of the year, and to expand benefits for truckers in other industries, including oil tankers.

The government has said it will extend the scheme for three years but rejected other union demands. In June, an eight-day, non-violent strike by truckers delayed cargo shipments across Asia's fourth-largest economy, costing more than $1.2 billion in lost output and unmet deliveries before it ended with each side claiming it won concessions.

The organising union kicked off 16 rallies across the country on Thursday morning, including at a port in Ulsan that houses Hyundai Motor's main manufacturing plant. The union estimated some 22,000 took part in the rallies, while the transport ministry said about 9,600 people attended, and there were no clashes with police monitoring events.

As a noisy rally got under way at transport hub Uiwang, 25 kilometres (15 miles) south of Seoul, hundreds of truckers marched around the depot - watched by a heavy police presence - carrying banners and wearing headbands with the slogan "Unite Fight". They chanted, "We stop, the world will stop!" and "Let's stop driving to change the world!".

Union officials said about a thousand truckers gathered at the rally, where the head of the union's Seoul metropolitan area branch, Lee Kwang-jae, told them to take up key positions to try to block any attempts to make shipments. One person leading the protesters called out to a container truck making for a depot, "Don't embarrass yourself by working. Join us!"

They planned to split in two groups, with half staying at Uiwang and the other half heading to Pyeongtaek, about 44 kilometres (27 miles) away, which is close to ports serving China.

Lead organiser the Cargo Truckers Solidarity Union (CTSU) has warned the strike could stop oil supplies at major refineries and transport at major ports and industrial plants. The union has said almost all of CTSU's 25,000 members, about 6% of the country's truck drivers, will take part in the strike, joined by an unspecified number of non-union members.

"We have no choice but to stop all logistics in Korea," said Lee Bong-ju, head of the union, on Thursday.

Earlier this week, Transport Minister Won Hee-ryong said the Safe Freight Rate system had not been proven to improve the safety of truckers but to only raise their incomes, a reason why the government has refused to expand the scope of the scheme. read more

"The government and the ruling party misled, and openly defended capital saying that truckers' income levels were not low - and that if the Safe Freight Rate system were expanded, prices could rise due to increased logistics costs," Lee said.

The union is asking the government to ensure big businesses are held accountable if they violate the minimum wages rule.

"Frontline truck drivers should not be sympathetic to unjustified collective action. We will strictly crack down on truck drivers' obstruction with the police so that safe transportation can be ensured," Transport Minister Won said on Thursday.

Industry giants including Hyundai Motor and steelmaker POSCO were forced to cut output by the June strike, and POSCO has warned that fresh action could slow repair works at a major plant hit by floods this summer.

"If the cargo union strike continues, it will put too much of a burden on not only major industries, but also people's livelihoods and the national economy," said Prime Minister Han Duck-soo on Thursday.

Companies such as Hyundai Steel, petrochemical firms and a battery maker told Reuters that because the strike was expected, urgent contract volumes were shipped out and necessary raw materials were prepared in advance. However, limits in storage space and logistics would make the strike problematic if it lasted.

A Hyundai Steel spokesperson said its daily shipment of about 8,000 tonnes of steel products at its Pohang factory could not be moved on Thursday due to the strike.

The government is deploying alternatives such as military-run container transport vehicles and considering securing more storage space in case cargoes pile up. Some industry officials noted that military vehicles may not be equipped to carry products such as steel or fresh produce.

The Korea Oil Station Association is asking gas station owners to secure enough inventory ahead of the strike, an association official said earlier, while charging stations for hydrogen-powered cars have put up signs warning that supply could be cut.