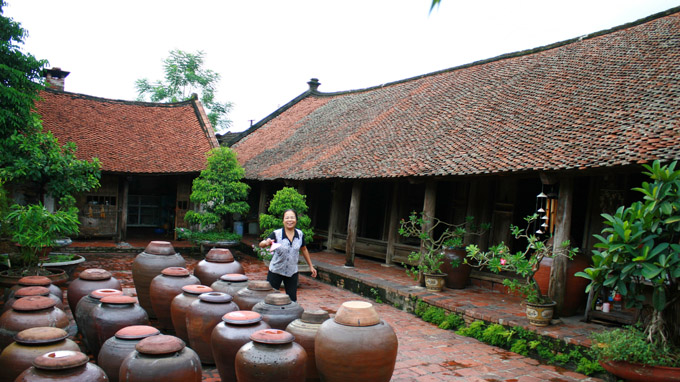 While local governments have pushed efforts to recognize and restore ancient villages and towns as national relics, locals have found that their lives are more difficult because of these titles.

As of May 13, 250 locals in Duong Lam ancient village in Hanoi’s Son Tay town have signed a petition to propose that the government remove the village’s heritage title due to the problems it has caused.

Since 2005, the village has been recognized as a national relic since it has many houses dating back to hundreds of years ago. However, to villagers, the title has brought more difficulties than benefits.

According to Giang Manh Hoang, chairman of the Duong Lam commune People’s Committee, locals have not received funds to repair their houses, while all of the money from tourist entrances fee has been kept to pay for the entrance fee managing board.

Meanwhile, after the recognition, the Son Tay town People’s Committee issued a strict regulation on local construction which does not allow houses in the relic area to be expanded or renovated into houses taller than one story in order to retain the ancient look of the place. This has caused stress for locals as the population has increased and is living in a area.

“In some houses, four couples have to live in a 100-square-meter area. Others who have only built small mezzanines to slightly expand their place have been forced to dismantle them,” Hoang stated . “Even the commune People’s Committees’ headquarters and preschool are in the same situation. 70-80 kids have to study in a room because we cannot build a two-story place,” he added.

Even though nearly 10 years have passed since the village was recognized as a national relic, the local government has yet to receive an official zoning plan to ease the local population density.

Hanh, a villager, signed the petition after he was not allowed to construct his house’s bathroom. “I was born with the right to build my house and my bathroom. Now I lost my right because of the ancient village title,” he stressed.

Hoi An: traditional materials - tough part of the story

While villagers in Duong Lam are unable to expand their living area, people in Hoi An find that their problem lies in the traditional materials used to restore their ancient houses.

In 1999, the town in the central province of Quang Nam was declared by UNESCO as a world heritage site for being a well-preserved example of a Southeast Asian trading port from the 15th to 19th centuries, and for having buildings with a unique blend of local and foreign influences.

In recent years, serious degradation has threatened the ancient town and created challenges for the local government as well as residents in restoring the area. A large number of architectural relics located in the town are private property dating back to the 19th century. Thanks to time and nature, the houses’ components made of wood and terracotta yin-yang tiles have been damaged and are under the risk of collapse.

However, finding money for restoration is not an easy issue. Due to the higher prices for traditional materials, the expense to restore an ancient house under recent regulations is 3-4 times more than to repair with modern materials.

Also, the production of traditional tiles is limited since the clay used to make them is now scare and includes many impurities. Wood is facing the same shortage due to the ban on forest mining.

The lack of professional technical restoration workers has also put more pressure on the ancient town.